Of the 14.5 gigawatts (GW) of battery storage power capacity planned to come online in the United States from 2021 to 2024, 9.4 GW (63%) will be co-located with a solar photovoltaic (PV) power plant, based on data reported to us and published in the Annual Electric Generator Report. Another 1.3 GW of battery storage will be co-located at sites with wind turbines or fossil fuel-fired generators, such as natural gas-fired plants. The remaining 4.0 GW of planned battery storage will be located at standalone sites. This was the key thrust of a report by Vikram Linga, for the US Energy Information Administration (EIA).

Historically, most U.S. battery systems have been located at standalone sites. Of the 1.5 GW of operating battery storage capacity in the United States at the end of 2020, 71% was standalone, and 29% was located onsite with other power generators. 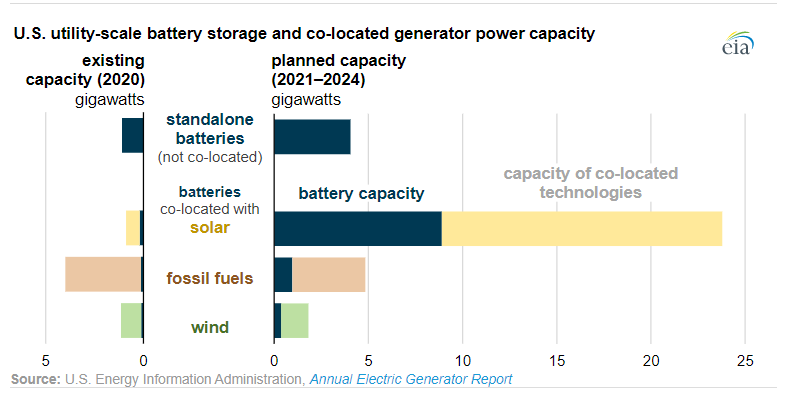 Most standalone battery energy storage sites have been planned or built in power markets that are governed by regional transmission organizations (RTOs) and independent system operators (ISOs). RTOs and ISOs can enforce standard market rules that lay out clear revenue streams for energy storage projects in their regions, which promotes the deployment of battery storage systems. Of the utility-scale battery systems announced to come online from 2021 to 2024, 97% of the standalone battery capacity and 60% of the co-located battery capacity are in RTO/ISO regions.

Another advantage of pairing batteries with renewable generators is the ability to take advantage of tax incentives such as the Investment Tax Credit (ITC), which is available for solar projects.

Tags: Battery plus solar co-location, battery storage in US, EIA, International, Investment Tax Credit, planned battery storage by 2024, Vikram Linga
"Want to be featured here or have news to share? Write to info[at]saurenergy.com