Amitabh Kant has revealed that an inter-ministerial panel has sanctioned 5,645 electric buses for operations in 65 cities 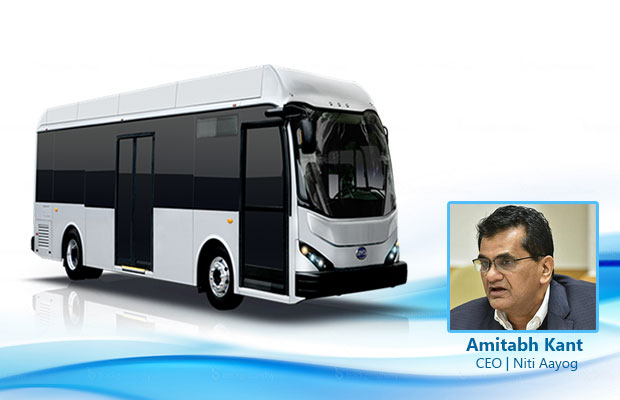 Niti Aayog CEO Amitabh Kant has revealed that an inter-ministerial panel has sanctioned 5,645 electric buses for operations in 65 cities, a move seen towards environment-friendly mobility.

Last week, the GST Council headed by finance minister Nirmala Sitharaman decided to cut the tax rates on e-vehicles from 12 percent to 5 percent with effect from August 1, 2019.

“The inter-ministerial committee for EVs today sanctioned 5,645 electric buses for intracity operations in 65 cities and for intercity operations to 8 state transport undertakings. This will give huge impetus to automobile sector, clean up our cities & drive Make in India,” Kant said in a tweet.

The Centre has been taking initiatives to popularise environment-friendly electric vehicles. In the Union Budget 2019-20, the government proposed additional income tax deduction of Rs 1.5 lakh on the interest paid on loans taken to purchase electric vehicles. Besides, certain parts of EVs have been exempted from customs duty to further incentivise e-mobility in the country.

The Centre has also approved Rs 10,000 crore under the FAME II scheme, which aims to encourage faster adoption of such vehicles by right incentives and charging infrastructure.

Recently, while addressing a conference on sustainable mobility, Kant had said that India has put in place a game plan for electric vehicles (EV) and its components like batteries to ensure clean cities, reduce imports and utilise solar power. And that the domestic battery manufacturing for electric vehicles provides a “massive market opportunity”, and also quickens the transition to such environment-friendly transport, which is vital for the country to help combat pollution, congestion, strengthen energy security and create jobs.