25% of Urban Population Lives in a City with RE Target, 18% in India: Report

A new report has found that 25% of the urban population lives in a city with a renewable energy (RE) target, lowering to 18% in India. 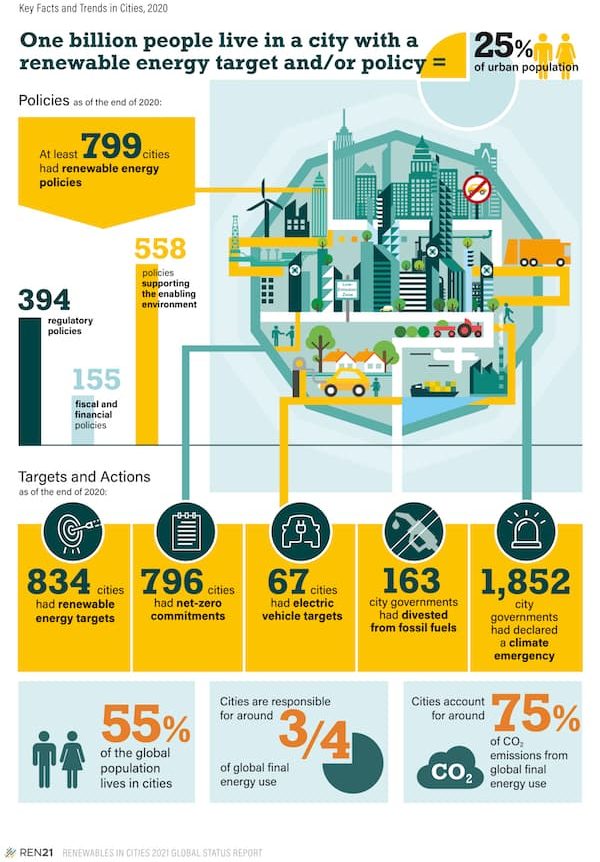 The report by REN21 found that city governments around the world are increasingly using renewables to help fight energy poverty, reduce air pollution, tackle climate change, and improve public health and well-being. They have installed, purchased and contracted for renewable energy to meet the demand of their own buildings and vehicle fleets; adopted renewable energy targets and implemented policies to incentivise local renewable energy generation and consumption; and supported urban community energy projects; and facilitated co-operation among stakeholders.

And that urban commitments to directly support renewables are increasing. In 2020 alone, more than 260 cities either set a new renewable energy target or passed a new policy. As of the end of the year, over 830 cities in 72 countries had adopted renewable energy targets. More than 600 cities worldwide having targets for 100 percent renewable energy. Cities have also taken action away from fossil fuels: by 2020, over 10,500 cities had adopted targets to reduce their greenhouse gas emissions and around 800 had committed to net-zero emissions. That’s an eight-fold increase on such commitments from 2019.

Cities are home to 55 percent of the global population (and growing) and generate more than 80% of global GDP. Urban energy use has also grown significantly over the past decades. Today, cities are responsible for an estimated 3/4 of global carbon dioxide emissions. This makes cities a high-impact location for climate action, decarbonising the energy system and accelerating renewable energy investments, helping cities to achieve their own objectives as well as global goals.

“With their impact at scale, cities are our best bet to plan, develop and build a renewable future. But all too often their potential for transformation remains massively underused,” explains REN21’s Executive Director, Rana Adib. 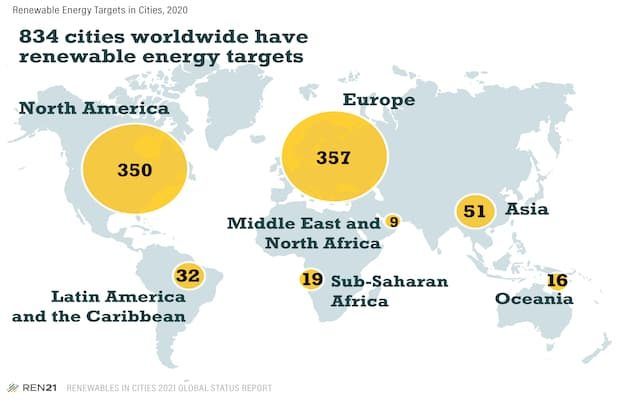 The report goes on to add that although target-setting in cities has focused on the power sector (around 75 percent of the targets), city-level policies and investments go beyond power to include heating, cooling and transport. By the end of 2020, around 800 municipal governments had in place regulatory policies, fiscal and financial incentives, as well as indirect support policies which enable the uptake of renewables in buildings and transport city-wide. In some cases, city targets and policies are more ambitious than those set by higher levels of government.

In Asia, the report found that much of the city-focused activity has occurred in India, where several “smart cities” have embraced renewables. In 2018, Diu Smart City became the country’s first city to operate on 100 percent renewable electricity, thanks in part to a 9 MW solar PV park and solar panels installed on 79 government buildings; several other smart cities issued tenders in 2019 and 2020 for local solar PV capacity atop buildings, canals and sewage treatment facilities.

In Delhi, solar PV installations on government and educational buildings totalled around 105 MW in 2019, with another 5 MW on residential buildings. By the end of 2019, the industrial city of Pune had more rooftop solar capacity (130 MW) than any other Indian city. Across India, the higher electricity rates, readier access to financing and larger rooftops for industrial versus residential users have encouraged the industrial adoption of solar PV.

The report also highlighted that in Asia, China and India account for most of the renewable energy investment. However, it also found that investment in renewable energy capacity in India fell 14 percent in 2019, to USD 9.3 billion.

Financing for renewables in Indian cities originates from three main sources: national and state-level schemes (such as the 100 Smart Cities Mission), which have increased in scale and number over time; international financing agencies and development banks, with many of these projects being small and experimental; and local private capital, for which very little information is available. Although municipal bonds have been used to a limited extent for infrastructure projects in India, they have not been adopted for renewable energy projects to date.

Historically, Indian cities have not been at the forefront of financing renewables, in large part because energy governance in the country remains constitutionally with the central and state governments. In 2015, however, the government launched the 100  Smart Cities Mission, creating a new vision for the role of cities in renewable energy projects. Subsequently, around 100 cities in India created plans for investing in energy distribution and supply, including solar PV, waste-to-energy and wind energy (to a limited extent), as well as electric mobility.

Of the first 60 approved proposals, around 10 percent of the budget – a total of Rs 13,161 crore (USD 1.8  billion) – was for such energy projects, with the remainder directed towards other infrastructure projects such as water, buildings, transport and waste management.

The report then goes on to add that the world is not on track to meet the Paris Agreement goals. While renewables have grown in the power sector, the shares of renewables in heating/cooling and transport remain low (around 10 percent and 3 percent respectively). Action is urgently needed – together, these sectors account for over 80 percent of global final energy demand. And cities are critical to decarbonise these sectors, and they’ve started to take up the challenge. Cities are leading by example, procuring renewables for their own operations, while scaling up renewable energy generation on public buildings and for municipal fleets. Urban City RE Target