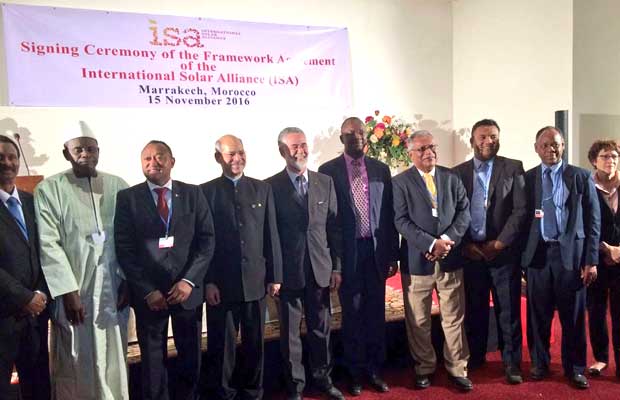 The framework agreement of International Solar Alliance (ISA) was opened for signatures on the sidelines of UN’s climate conference CoP22 on Tuesday.  Environment Minister Anil Madhav Dave said with this legal framework in place, ISA will be a major international body headquartered in India. He added “We firmly believe that International Solar Alliance will become instrumental in transforming the global Solar Energy landscapes.”

Indian climate experts termed it as a “good initiative which will aggregate demand, improve quality and reduce cost of solar energy in developing countries but cautioned that achieving these objectives will require countries to have “confidence” in ISA.

“The Framework Agreement of ISA was opened for signature in Marrakech on the sidelines of the CoP22 to the United Nations Framework Convention on Climate Change. This will make ISA an innovative, action oriented and sui generis international and inter-governmental treaty-based organization that will be registered under Article 102 of the UN charter,” an official statement said.

The Framework Agreement will be kept open as many more countries are expected to join the ISA in the coming weeks.

On behalf of Government of India Dave expressed gratitude to all signatories for gracing Signing of Framework Agreement of ISA and continued support for concretizing the concept and reaching the milestone in shortest possible time.