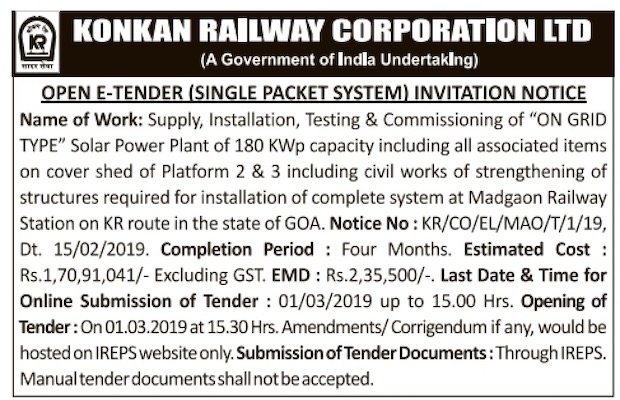 The Konkan Railway Corporation Limited (KRCL) has issued a tender inviting bid from eligible project developers to set up an on-grid solar power plant of 180 kW capacity on the cover shed of Platform 2 and 3 at the Madgaon Railway station in Goa.

The brief scope of work will include the design, supply, installation, testing and commissioning of the solar power plant including civil works.

The estimated cost of the project is Rs 1,70,91,041 and the selected bidder will be granted a period of four months to complete work on the project.

The Goa government has notified the Solar Energy Policy to promote unconventional electricity generation in the coastal state. The policy came into force with immediate effect.

As per the policy, the consumer and the producer of solar power will be entitled to avail benefit in the form of 50 percent subsidy from the state government, a senior official said.

The policy also provides for a penalty equal to five percent of the value of energy committed every day, if power producer fails to complete and commission the project within the given deadline, he said. It mentions that technological improvements have made the generation of solar energy economically viable and would lead to a reduction in expenditure of the state for the purchase of conventional power from the grid.

Under the policy, the government will provide 50 percent subsidy, including 30 percent share from the Centre, for the capital cost or the benchmark cost provided by the Ministry of New and Renewable Energy (MNRE) or cost arrived through the tendering process by the Goa Energy Development Agency (GEDA).