Home » In Talks » Our strategy for India is to provide the best quality modules with high efficiency: Nimish Jain, Deputy Director APAC, JinkoSolar

Our strategy for India is to provide the best quality modules with high efficiency: Nimish Jain, Deputy Director APAC, JinkoSolar 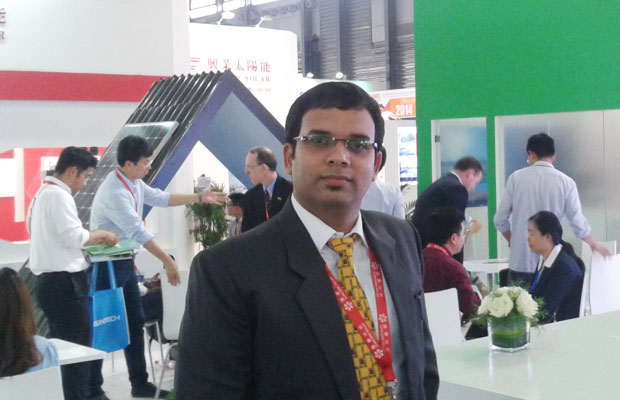 JinkoSolar is one of the global leaders in the solar industry. It distributes its solar products and sells its solutions and services to a diversified international utility, commercial and residential customer base in China, India, United States, Japan, Germany, UK, Chile, South Africa, Mexico, Brazil, UAE, Italy, Spain, France, Belgium, and other countries and regions. JinkoSolar has built a vertically integrated solar product value chain, with an integrated annual capacity of 3.5 GW for silicon ingots and wafers, 3 GW for solar cells, and 6 GW for solar modules.

ANS:- Indian has always been an important market for JinkoSolar and specially in the last one year India has become one of the top 5 markets for JinkoSolar. Indian market is quite exciting and challenging as the tariffs are going down but at the same time the module price and financing costs are going down. Our strategy for India is to provide the best quality modules with high efficiency and best in class power output.

ANS:- This project is one of the best performing projects in India. Many of our existing and potential customers have visited this plant and witnessed the performance of the plant and the PV modules and all of them were quite happy and satisfied with the module performance. We have bagged many big and prestigious orders since then and this project has played a pivotal role in shaping up Jinko’s business in India.

ANS:- Proinso is our long term trusted partner not only in India market but also in other strategic markets like Europe, Japan, Australia, Philippines etc. Our relation with Proinso has been very good specially in penetrating the fast growing rooftop and commercial solar PV market in India. We have several projects coming up in the tune of more than 10 MW in coming few months.

ANS:- We are delighted to secure financing from a local bank consortium in Japan that will allow us to pursue opportunities in Japanese market. It also demonstrates the trust and recognition that first-tier Japanese commercial banks have in our brand and operations in Japan. We look forward to further deepening our relationship with SMBC and other local banks as we expand our business there.

5. JinkoSolar again ranked in the China Fortune 500 list and soared to its greatest heights yet, moving up 107 spots to No. 330. So what does it means for the company?

ANS:- Fortune ranks companies by a number of factors, including their 2015 revenue. According to Fortune, JinkoSolar total revenues were RMB16.08 billion in 2015, an increase of 61.1% from 2014. Each year the Fortune 500 list ranks the titans of industry, and there’s always a special focus on the companies with the largest gains in rank. JinkoSolar had connected and operated over 1 GW of solar plants by the end of 2015, pioneering a strong presence in the Chinese distributed generation market. After a record-setting year of sales, it shouldn’t be much of a surprise that JinkoSolar has been the fastest growing and the most sustainable company in the global solar PV industry.

6. How is 2016 shaping up globally for JinkoSolar?

ANS:- In 2015, JinkoSolar had shipped modules to more than 55 countries and in 2016, the company will ship modules to over 70 countries worldwide. Major markets are China, US, Latin America, MEA and Africa, India, South East Asia, Japan and Australia, etc.

On Aug.25th, JinkoSolar published Q2 financial results that reveal surging growth in the downstream activities. During Q2, JinkoSolar increased its module shipments by 7.3% on Q1 to 1,716 MW. This number represented a huge 87.9% increase on the 913 MW shipped in Q2 2015. This growth drove revenues to RMB 5.96 billion for Q2. By far, JinkoSolar has become the world’s largest Solar module manufacturer in the first half of 2016 with total shipments of 3316MW.

We predict that the overall solar PV industry will grow this year, then stabilize or decrease a little next year, and then finally accelerate expansion from 2018 onwards due to its cost undercutting coal on a global scale. The solar PV role at the center of energy becomes vital, both today and in the future, which is why I am strongly optimistic of the years ahead of us.

JinkoSolar has recently announced that its Eagle Perc module created a new world output record of 343.9 Watt for mono-crystalline silicon modules. Tests for the module were independently confirmed and certified by TUV Rheiland. The Eagle Perc module is made up of 60 pieces of high-efficiency p-type mono-crystalline silicon cells which are measured at 156 mm by 156 mm. TUV Rheiland tested the module under standard testing condition (STC) at 343.9 W, following its previous record of 334.5 Watt for poly-crystalline silicon modules. By far, JinkoSolar has become the new world record holder for both mono and poly C-Si solar module.