Home » In Talks » If the solar tariff increases then the demand of solar will go down which will impact the further capacity roll-out: Hindustan Power

If the solar tariff increases then the demand of solar will go down which will impact the further capacity roll-out: Hindustan Power 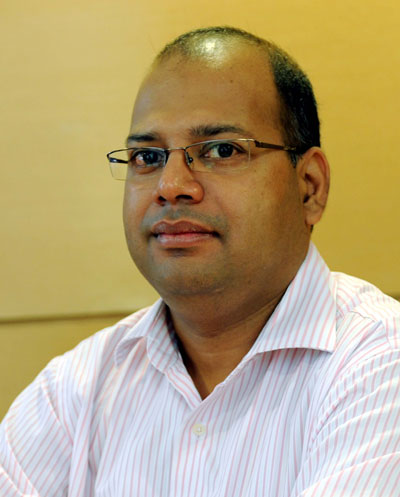 The Clean energy arm of Hindustan Power is one of the leading India’s player in solar power generation. It has developed solar farms across the country and internationally.  Hindustan Power played major role in changing the scenario of solar power in India. India’s first solar power plant of 5 MW capacity and the then Asia’s first 30 MW capacity was commissioned by the Clean energy arm of the organization. Today, Hindustan power is one of the dominant solar power development company in India with a large presence across the country and strategic international markets like Germany, Italy, US, UK and Japan. In a candid chat Lalit Jain, Group Chief Commercial Officer & CEO (Solar International & Wind), Hindustan Power shared about the major drivers of the India solar market, technology obsolescence risk, policy need, effect of GST on Indian solar sector and more with Saur Energy International’s Sr. Journalist Santanu Mukherjee.

Solar sector in last few years has witnessed remarkable growth. The same is evident from the fact that 20 GW Solar target has quintupled to 100 GW by the year 2022 by Government and also by quantum of Solar bids which have come out in market in last one year. Going forward, in 2016-17 we envisage the Solar growth story to continue. The key driving factors for Solar are: high irradiation in India, suitability of Solar for meeting day-peak & seasonal power demand shortages as solar generates more in summer & day time; existence of strong & enabling regulatory framework; role of Solar in pollution reduction and most importantly, its tariff is now competitive with other sources of generation.

Solar in last few years has emerged as one of the rising sectors in the country. However, domestic manufacturers have not benefited from this growth. The Indian domestic players are plagued with multiple issues which need to be addressed by Government. The key issues which need to be addressed include the small scale of existing manufacturing units, i.e. absence of local supply chain; poor R&D investment and high interest costs and availability of working capital.

It is important to understand distinction between technologies under development & commercially usable technologies. A new technology can easily take 5-7 years to be used commercially with non/limited resource funding. Nevertheless, a disruptive technology can significantly impact the manufacturers. As a developer, we sell energy under a long term contract and we are therefore protected from such risks.

While the country is adding renewable energy capacity at a brisk pace, it is equally important to ensure that the power transmission infrastructure is in place to off take additional power generation capacity. Similarly, grid stability is a major issue which needs to be addressed. We need Government to also monitor implementation of Uday such that our buyer becomes credit worthy. Government also needs to restrict its direct/indirect role to be a facilitator rather than regulator/ participant in the industry.

India’s goal to provide uninterrupted and affordable power for all requires the entire power industry as well as the coal and gas sectors functioning seamlessly. That involves making sure that electricity producers get affordable supply of coal and natural gas, competition drives down tariffs, the transmission network is congestion-free and distributors become more efficient by eliminating power theft and reducing AT&C losses. The Government will have to work on these areas to achieve the desired goal.

The sector, currently enjoys various tax benefits and exemptions, like – taxes currently applicable on equipment of a solar PV plant are customs duty, excise duty, VAT, service tax, etc., most of which are nil/exempted depending upon the state and central policies. The average tax applicable on the solar equipment is 2-3%. However, after the planned application of proposed GST from 1st April 2017 it is expected that average tax would increase to 18%. This increase would primarily be based on following factors, i.e. removal of lower duties & taxes on – capital goods & services; removal of concessions available in lieu of statutory forms etc. The impact is due to the proposed exemption of electricity consumption from the gambit of GST. These factors would create a mis-match situation wherein the inputs related to execution & commissioning of Solar power plants are getting taxed under GST whereas the output, i.e. electricity produced has been kept out of the gambit of GST. Further Solar, as compared to other sources of electricity, has no fuel cost and has only the capital servicing costs, which are dependent on GST on capital goods & services.

In light of above, tariff increase/revision of solar power will be required to ensure the continued viability of new projects. As per MNRE report itself, the expected impact of GST on Solar tariff would be in range of 12%-16%. This increase in Solar tariff would lead to a delay in Solar achieving grid parity. The Government efforts in the last 12-18 months & due to various other factors had resulted in reduction in solar tariff, i.e. from Rs. 6.71/kWh (Karnataka bid, November-14) to Rs. 4.35/kWh (Rajasthan bid, July-16). This reduction of tariff was able to address the “high cost of solar power” concern of the Discoms to great extent. Further due to reduction on solar capex, solar roof-top had become viable for commercial and industrial consumers in few states. If the solar tariff increases then the demand of solar will go down which will impact the further capacity roll-out. Thus, this increase would push back grid parity and will also slow the pace of achievement of 100 GW targets.

Going forward, GST may also impact those projects for which PPAs have already been signed but which won’t be now able to complete its procurement and execution of projects by the likely date of GST implementation, i.e. 1 April 2017. These projects shall seek compensation because of Change in Law/ Taxes which shall impact the tariff and financials of Discoms.