GoodWe Inverters bring you 3 key points to ensure the safety of you and your PV plant when it comes to risks from inverters. 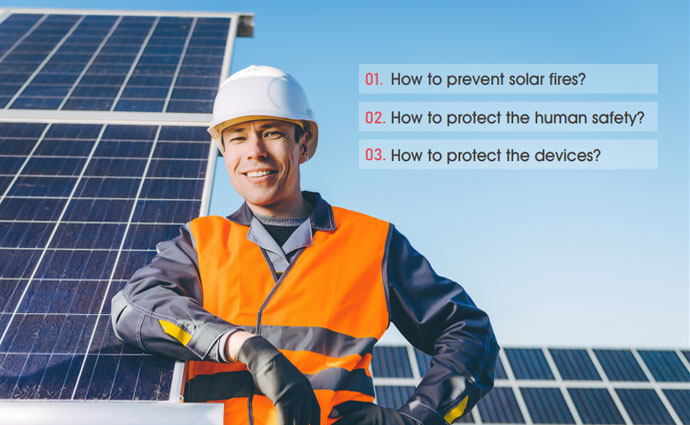 Solar energy has become one of the most popular forms of renewable Energy and the numbers of PV systems in use have rapidly grown in recent years. Like any energy generating option, Safety is always a key focus of attention. A solar system is normally composed of PV array, inverter, combiner box and monitoring platform. As a key component in the system, the inverter undertakes the task of both generation and protection. This article focus on how to prevent solar fires, protect the personal safety and protect the devices from the inverter side.

1. HOW TO PREVENT SOLAR FIRES? 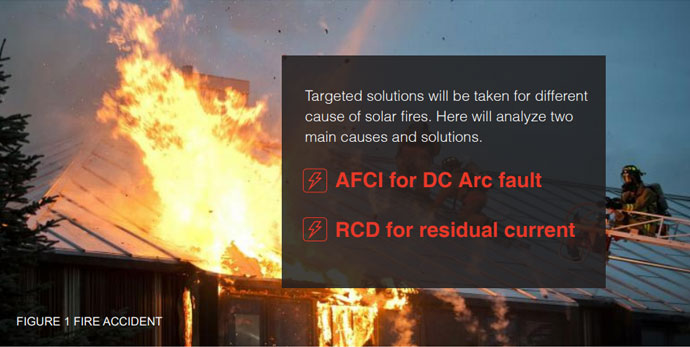 In the discussions about the fire hazard in the PV system, the DC side is always the focus. And the major risk of fault on the DC side is DC arc fault. So what is an arc fault? An arc fault refers to a situation in which loose or corroded connections(usually wiring) create an intermittent contact that causes electrical current to spark, or arc, between metal contact points. Arc faults may be caused by several reasons such as: faulty components, installation errors, or mechanical damage and aging, including Loose or separated joints, connections or terminations; damaged or aged insulation; damp and broken cable and bad contact. 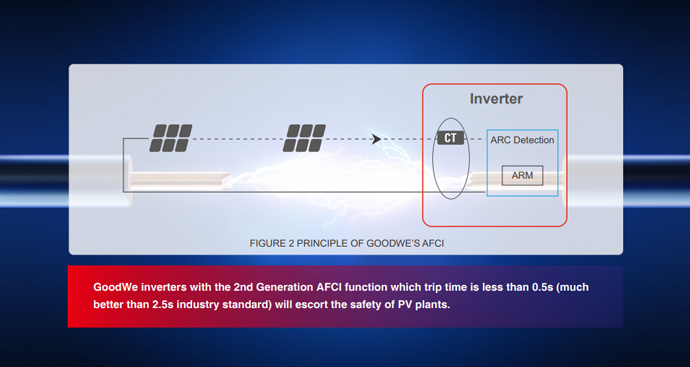 PV systems produce residual currents like any other electrical equipment. Residual current in the PV system, which refers to the leakage current from PV to the ground, could be caused by the parasitic capacitance between the PV arrays and the ground and ground fault. As the figure 3 shows, a loop will be formed between the AC grid, inverters, PV modules and ground. If the continuous leakage current exceeds a limit value, the carbon deposits and insulation can quickly ignite and cause a fire hazard.

According to requirement in IEC 62109-2:2011, inverter shall provide residual current monitoring, i.e RCMU, which shall measure the total (both AC and DC Components) RMS current and activate an alarm. In addition, an external RCD (Residual Current Device) can also be used to detect these currents and disconnect the circuit from the source automatically according to the preset threshold value. To prevent the fire risk RCMU or RCDs should be equipped with maximum 300mA of rated residual operating current for inverters with a rated output power less than 30kVA. Inverters with a rated out power greater than 30KVA shall disconnect if the detected continuous residual current exceeds maximum 10 mA per kVA.

2. HOW TO PROTECT THE HUMAN SAFETY?

Just as with other electric system, PV system present the risk of electric shock. How to protect the human from inverter side? This chapter focus on RCD and external emergency switch. Keep in mind that modern PV systems come with some of the most effective and easy to use features to ensure user safety.

As the figure 4. shows, leakage currents can flow through a human body to ground and form a loop between human, inverters and AC grid, which resulting in a risk of electrical shock. This risk also can be prevent by the protection method of RCDs.

The RCD integrated into non-isolated grid-tied inverters are required to have a limit value for sudden changes of 30mA. That means, the inverter will disconnect from the mains within a time, when the current exceeds 30 mA.

02 SHUTDOWN ON AC SIDE

Inverter as the key unit in PV system is connected with AC grid. GoodWe inverters provide remote shutdown solution for system security protection by cutting from grid on AC side. 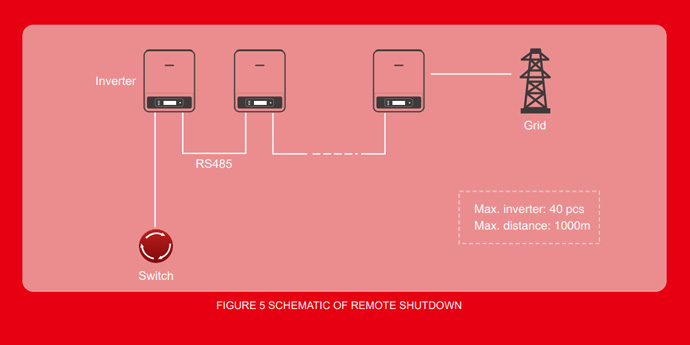 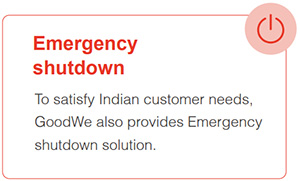 The on-off switch can be deployed in a remote place, where the operator can turn on or off the switch at a safe distance to control the inverter. Communications cable such as RS485 are used to connect inverter and switch to transmit signals of remote shutdown. To realize communication between multi inverter and one switch, inverter should be connected hand in hand as shown in figure 5. When operator turn on the switch, signals of remote shutdown shall be sent to multiple inverters at the same time, and the inverters should disconnect from grid and stop power output within 0.5s.

3. HOW TO PROTECT THE DEVICES?

The installations of PV Plants which arise from their exposed nature and collection areas makes them vulnerable to overvoltage surges form lightning.

In a lightning-prone area, the lightning-induced array failures can be more detrimental to solar equipment. SPDs are particularly crucial to protect against damage from surges including direct lightning strokes and indirect lightning.

GoodWe inverters integrate SPD I or II on DC side and SPD II on AC side. SPD I can discharge the back-current from lightning spreading from the earth conductor to the network conductors. SPD II prevents the spread of overvoltages in the electrical installations and protects the loads.

SPD connected in parallel has a high impedance. Once the transient overvoltage appears in the system, the impedance of the device decreases so surge current is driven through the SPD, bypassing the sensitive equipment.

PV Systems are generally a safe technology. Nevertheless, like any other electrical equipment PV systems constitute a risk of fire, electric shock which is dangerous to humans. To prevent the potential fire risk it is important to analyze the cause of fire. In this article we discussed two main causes and proposed the relevant solutions. In critical applications, AFCI should be equipped for a reduced risk of DC arc fault. RCMU and RCD can against the fire risk, which caused by residual current. RCD can also be a life-saving device which can prevent human from getting a fatal electrical shock. To minimize the risk which the human contact with the live cables, the emergency switches of remote shutdown are used to separate the power from Ac grid. Also we provide the device protection like SPD to against damage from surge. It is always important to remember to operate these under trained supervision or through trained experts.