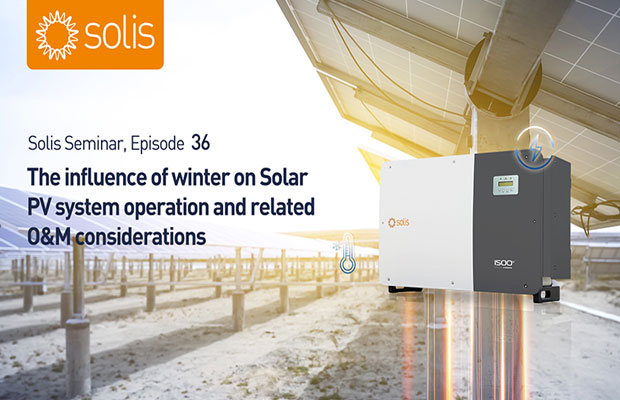 Winter is well and truly on its way for the northern hemisphere with temperatures beginning to fall and already reaching freezing point in some regions. According to forecasts there will be prolonged periods of icy and snowy weather in Europe on its way. So, what are the specific effects of winter on the operation of a solar PV system, and how should we carry out effective operation and maintenance (O&M) of the PV plant in cold weather?

This Solis seminar will look into the effects of cold weather and share suggestions for keeping your solar plants running effectively through winter.

The main impact of winter on PV plants

In addition, the main influences on the operation of solar power plants in winter are the following factors:

In cold weather, the ambient temperature in some areas often drops below freezing point (0°C), and in some severe cold areas may drop below -10°C;

Since the equipment in a solar PV system, such as solar panels, inverters, data collectors, batteries, etc., have a certain operating temperature range, when the temperature is lower than the allowable temperature of the equipment, it may affect normal operation. This should be considered when choosing the installation site and design of the system.

Recommendation: Equipment should be sited in areas that have temperatures within the working limits of the equipment. Items such as energy storage batteries, household PV inverters, data collectors, etc., could be installed indoors or in a cold-proof environment.

Low temperature affects the Voc voltage of the PV system

Low temperature will cause the open circuit voltage(Voc) of PV strings to increase. If the initial design of the system does not fully consider the influence of temperature, during the later operation of the system, the string Voc under low temperature conditions can exceed the maximum allowable input voltage of the inverter, which will likely cause damage.

Taking a 20kW (maximum DC input voltage of 1100V) grid-tied PV system as an example, 52  475W PV panels are used. Assuming that the lowest temperature in the area during the day is

Note: The open circuit voltage temperature coefficient of this PV panel is -0.28%/℃, The value of this coefficient is different for different brands of PV panels;

Recommendation: In the preliminary design of a PV plant, it is necessary to fully consider the Voc of the PV string in extreme low temperature.  Reserve sufficient margin to prevent the DC overvoltage in the winter from causing damage to the inverter. If the system has a “OV-DC” alarm, it is necessary to immediately turn off the DC switch of the inverter and reduce the number of solar panels of the PV string.

In winter, the angle of sunlight is narrower and shadows are longer. Therefore, the PV array is more prone to shadow occlusion, which has a great influence on the power generation of the PV system.

Recommendation: In winter, the cleaning of the solar panel surface is advised to avoid dirt accumulation.  It is also recommended to keep overhanging trees well cut back to prevent the formation of shadows as well as removing furniture causing shadow if possible.

Another major problem facing PV plant operation in winter is snow accumulation. Snow covering the solar panel will reduce the solar radiation received by the solar panel and directly reduce the power generation. Moreover, the long-term uneven irradiation of the components may also cause greater hidden dangers due to the hot spot effect. 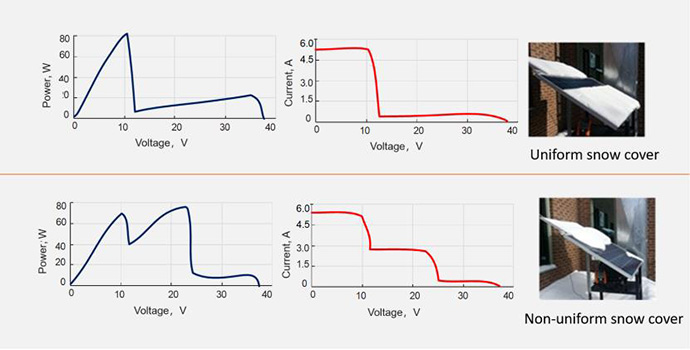 In addition, snow cover is also a major test for the structural design of the entire PV system due to its weight. Severe snow accumulation can even cause the PV array to collapse, causing equipment damage and personal injury and property losses.

When a PV plant accumulates snow, it needs to be cleaned off in good time to prevent excessive snow accumulation forming into ice, making it heavy and difficult to clean. Please use soft objects for cleaning, do not scratch the glass, and do not step on the PV panel.

Snow removal includes not only solar panels, but also equipment such as inverters and power distribution cabinets. For example, timely clean-up of snow from the cooling air outlet of the inverter, will prevent the surface of the inverter and the external cooling fan from icing.

Winter is coming! In addition to the adequate protection of warm and cold protection measures, you also need to maintain your own photovoltaic power station, keeping the panels clean and clear of shadowing. If snow falls, clear it swiftly to avoid potential damage and loss of power. Ensuring local conditions and weather patterns are taken into consideration when designing a new solar PV system will ensure that power is maintained during harsh winters.