Solar Energy On-Demand Use can be a Marvel Possibility

Researchers at MIT have come up with a ground breaking new innovation – a unique process for absorbing and retaining solar energy for on-demand use.

“It is a material that is capable of absorbing photons (light) and storing their energy,” said MIT professor Dr. David Zhitomirsky.

“Then, this energy can be released as heat on-demand, re-generating the original material, and this can be done many times.”

Dr. Zhitomirsky, the project lead and the first author of the journal Advanced Energy Materials asserts that storing solar heat in the form of a chemical change (instead of storing the heat itself) is the answer to long-lasting and stable storage. No matter how effective the insulation, heat will always dissipate over time.

On the other hand, a chemical storage system can keep the energy in a stable molecular formation until it was time to be released. The release could be triggered by heat, light or electricity.

“Absorbing light results in a shape change in the molecules within these materials. The energy of the resultant molecule is higher than its initial energy, so upon reversion to the original state this energy can be released to the environment as heat,” Dr. Zhitomirsky explained. 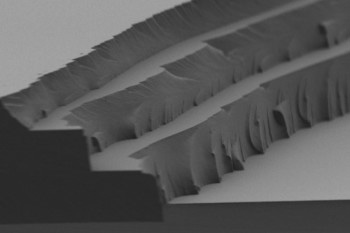 The process is based on polymers, cost-effective materials and common manufacturing technology. Previous attempts at chemical-based storage materials were based on liquid systems, which limited their application. This new approach, however, is based on solids.

Manufacturing the material is a two-step process. The team used azobenzenes that change their molecular configuration when exposed to light. A small amount of heat reverts the azobenzenes back to their original configuration and enables them to release the previously stored heat.

Researchers changed the material’s chemistry to improve its energy density, its ability to create even, constant layers and its reaction to the activating heat pulse.

“These materials could find a lot of use in rural areas and in third world countries, but also in urban first world environment where they can be integrated into clothing, for example.”