The Brahma Kumaris, the now global spiritual movement with its Headquarters in Mount Abu, Rajasthan has grown to be a massive organisation today. With hundreds of thousands of members and centers across almost a 100 countries.

One of the driving ethos of the movement today is a push to be sustainable, and while that can be seen in many things they do, if you visit their HO in Mount Abu, two things will really stand out on this front. The focus on sustainable food practices, and energy. While the former manifests in the sourcing, production and processing of the food that is consumed at the Ashram, which incidentally also uses a lot of solar cooking, the latter is what drew us to the place.

What we found is a commitment to solar that is way older than anyone could have imagined, with the movement trying out solar along with battery storage as far back as the 90’s first. Sudhir Kumar, who heads the Electrical Division for the sprawling campus, told us that a key reason for the attraction to solar was its availability in abundance, the fact that it was clean, and in many ways, conforming to the conception of pure, as a natural resource. Solar is truly life giving for all on Earth, and for the group, the idea of using Solar energy was always an idea worth exploring. That is what led to the massive push behind the showcase 1 MW IndiaOne project for instance, which is a concentrated solar+thermal generation project built with German support. However, while IndiaOne was still coming up, the group also decided to go on their own for a regular solar PV plant of the same size, to be built adjacent to the IndiaOne project. Simply because Solar costs by 2018 had reached a point where the group believed the combination of ROI and sustainability was simply perfect. It’s a view that many corporates are coming around to now.

These 5 Firms Moved To Solar in 2021. How Many Will Follow?
Also Read

The 1 MW plant, now well into its second year, has become a showpiece plant, with visitors, both local and international that visit the Ashram and Mount Abu, inspired by the impact it is having. The Brahma Kumaris, who benefit from the huge advantage their own members from relevant fields bring in sometimes, certainly benefited from the wide experience and exposure their own members brought for this. From design to procurement to the final engineering work, their own experts worked with the EPC contractor for the project. Manish Kumar Founder and CEO of Samhita Technology, who executed the project, tells us how the Brahma Kumaris first tried a smaller, 100 KW project to power their printing press, and only after seeing the results there, went for the larger, 1 MW project that would serve the whole Ashram.

With REC Group Modules and ABB Inverters, the plant is serving the needs of the Ashram well today, saving over Rs 10 lacs per month in electricity costs for the Ashram by generating over 120,000 units every month on average. 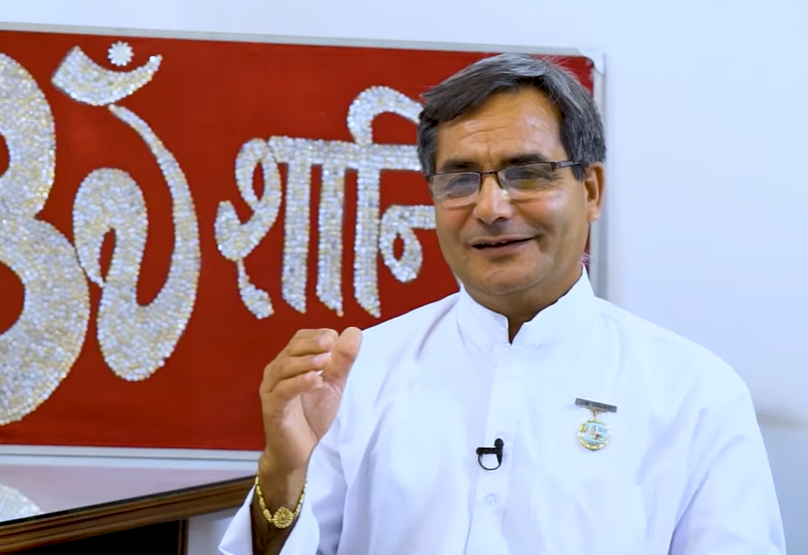 For the Ashram, and REC Group itself, the PV plant is a very strong demonstrator of taking the long term view on solar, with quality the focus rather than just lowest possible cost. This is apparent when we spoke to the plant maintainance team, who iterated that the running has been relatively smooth and trouble free for them, and the production both predictable as well as per the promises made. Between the 100 KW pilot and the 1 MW plant now, the Brahma Kumaris are happy enough to have started making plans to use solar in a bigger away across more centres, and have become a big votary of progressive net metering policies too.

For Samhita Technology’s Manish too, the risk of recommending a ‘premium’ but high quality module in the form of the REC Group panels has paid off with a larger project following the 100 kW project he executed first.

Note: The visit to the Ashram by SaurEnergy, and multiple sites across Rajasthan to watch solar at work was supported by the REC Group.