The ability to use cheap materials and simple manufacturing methods are two huge advantages of printed organic solar cells. OlleInganas, professor at Linkoping University, is head of a research group that has now developed an even simpler method to manufacture solar cell modules. The results have been published in the scientific journal npj Flexible Electronics. The energy efficiency of organic solar cells is approaching that of conventional silicon solar cells, but they don’t necessarily have to compete on the same market. 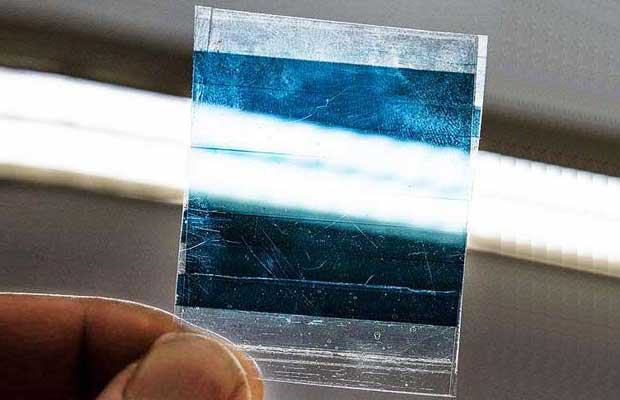 “The organic solar cells can be used in many contexts, not least those in which their special properties are useful: they can be semitransparent, soft, flexible, can be obtained in different colours, and they are cheap to manufacture,” says OlleInganas, professor of biomolecular and organic electronics at Linkoping University. Together with his research group, he has now developed an improved method to manufacture these thin and flexible solar cells.

In a semi-transparent solar cell module as shown in the photograph, electrodes with two variants of the polymer PEDOT:PSS (commonly used in organic electronics) are used, where one acts as the anode and the other is modified to become the cathode. What appear as stripes across the solar cell module are lines of either cathode-type or anode-type material. The active layer that absorbs light and produces electrons is located between these electrodes. The individual solar cells are connected in series in the module.

When the electrodes and the active layer are printed as thin films on top of each other, defects in one layer will act as points of attack for the next layer to be printed. These defects reinforce each other and cause short-circuits between the top and bottom. Until now, this problem has been solved by passing a current through the cell. “The defects in each individual cell must be burned away. Not only is this time consuming, it’s not easy to gain access to all cells, and this means that the reject rate for faulty units is quite high,”

OlleInganas explains. The researchers have now successfully tested a method in which they use instead the active polymer material as glue. Two plastic films, one with the anodes and the other with the cathodes, are covered by the active material before the complete unit is laminated together. Since only two layers are to be printed, the number of defects is lower and the probability that two defects are located exactly opposite each other during the lamination is negligible.

“It just doesn’t happen. But we did discover that when we laminate the two layers together to give a flexible and robust module, the solar cells generate more current when illuminated from one side than from the other. Of course, we want the cell to generate the same current no matter whether the sun is rising or setting,” he points out.

The researchers have shown that it is moisture causing the trouble. Small electron traps form in the material that capture electrons before they reach the electrode. The problem can be solved by manufacturing the anode and cathode films, and then rapidly laminating them together with the active polymer in a protective atmosphere. The shorter the period that the film is exposed to moisture the better.

“We have shown that this lamination method works with many different combinations of polymer, and that the energy efficiency is just as high as that obtained by conventional manufacture,” says OlleInganas.

The solar cell modules that have been developed by OlleInganas and his group at Linkoping University are being developed and manufactured by the spin-off company Epishine, which has chosen to aim at the market for indoor cells. The solar cells then absorb the indoor illumination and create enough current to power, for example, sensors that keep track of a dog when its owner is not at home, or that measure the indoor humidity or temperature. Indoor illumination has a different spectrum and intensity than sunlight, so the conditions of use are simpler and the efficiency high.