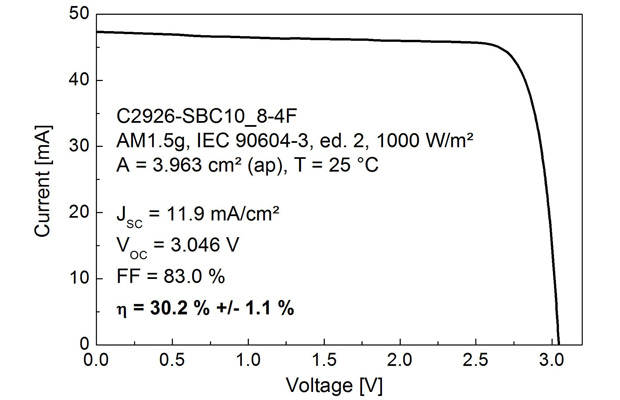 Researchers at the Fraunhofer Institute for Solar Energy Systems ISE together with the Austrian company EV Group (EVG) has developed a silicon-based multi-junction solar cell with two contacts and record efficiency of 30.2 % exceeding theoretical limit of silicon solar cells.

To achieve this efficiency, researchers used a “direct wafer bonding” process to transfer a few micrometers of III-V semiconductor material to silicon, a well-known process in the microelectronics industry.

According to the researchers after plasma activation, the subcell surfaces are bonded together in vacuum by applying pressure. The atoms on the surface of the III-V subcell form bonds with the silicon atoms, creating a monolithic device.

The efficiency recorded presents a first-time result for this type of fully integrated silicon-based multi-junction solar cell. The new solar cell has a simple front and rear contact just as a conventional silicon solar cell and therefore can be integrated into photovoltaic modules in the same manner.

“We are working on methods to surpass the theoretical limits of silicon solar cells,” said Dr. Frank Dimroth, department head at Fraunhofer ISE. “It is our long-standing experience with silicon and III-V technologies that has enabled us to reach this milestone today.”

A conversion efficiency of 30.2 percent for the III-V / Si multi-junction solar cell of 4 cm² was measured at Fraunhofer ISE’s calibration laboratory. It is worth noting that the highest efficiency measured to date for a pure silicon solar cell is 26.3 percent, and the theoretical efficiency limit is 29.4 percent.

The III-V / Si multi-junction solar cell consists of a sequence of subcells stacked on top of each other. So-called “tunnel diodes” internally connect the three subcells made of gallium-indium-phosphide (GaInP), gallium-arsenide (GaAs) and silicon (Si), which span the absorption range of the sun’s spectrum. The GaInP top cell absorbs radiation between 300 and 670 nm. The middle GaAs subcell absorbs radiation between 500 and 890 nm and the bottom Si subcell between 650 and 1180 nm, respectively. The III-V layers are first epitaxially deposited on a GaAs substrate and then bonded to a silicon solar cell structure.  Later the GaAs substrate is removed, and a front and rear contact as well as an antireflection coating are applied. “Key to the success was to find a manufacturing process for silicon solar cells that produces a smooth and highly doped surface which is suitable for wafer bonding as well as accounts for the different needs of silicon and the applied III-V semiconductors,” explains Dr. Jan Benick, team leader at Fraunhofer ISE. “In developing the process, we relied on our decades of research experience in the development of highest efficiency silicon solar cells.”

The cost of the III-V epitaxy and the connecting technology with silicon is expected to fall once the III-V / Si multi-junction solar cells are available commercially. Researchers note that there are still great challenges to overcome in this area, which they aim to solve through future investigations.