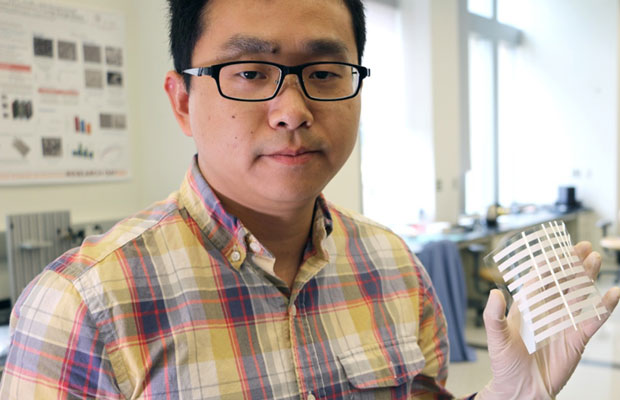 A research team Led by Shashank Priya has developed flexible solar panels that can become part of window shades or wallpaper capturing light from the sun as well as light from sources inside buildings.

The solar modules which are said to be less than half-a-millimeter thick are created through a screen-printing process using low-temperature titanium oxide paste as part of a five-layer structure that creates thin, flexible panels. These tiles like flexible panels can be joined together to cover large areas.

According to the researchers an individual panel can generate about 75 milliwatts of power, which means a panel in the size of a standard sheet of paper could easily recharge your smart phone.

The flexible panels are designe to absorb diffused light, such as that produced by LED, incandescent, and fluorescent fixtures, according to Priya, the Robert E. Hord Jr. Professor of Mechanical Engineering in the College of Engineering.

“There are several elements that make the technology very appealing,” said Shashank Priya, the Robert E. Hord Jr. Professor of Mechanical Engineering. “First, it can be manufactured easily at low temperature, so the equipment to fabricate the panels is relatively inexpensive and easy to operate. Second, the scalability of being able to create the panels in sheet rolls means you could wallpaper your home in these panels to run everything from your alarm system, to recharging your devices, to powering your LED lights.”

The panels can also be used as the window shades and curtains absorbing sunlights through windows.

“The properties of the panels are such that there are really few limitations in terms of light source,” Priya said. He added “And the fact that we are dealing with an emerging technology, means we will be able to expand the utility of the panels as we go forward.”

According to the researchers the efficiency of the cells is nearly on par with the heavier, rigid silicon structures, however at panel-level there is some research required. Still, it is likely the new flexible panels will overtake their rigid cousins soon.

“Right now we are on the cutting edge of this technology,” Priya said. “Our edge is in the ability to fabricate large-area modules with high efficiency. We are actively working to integrate the product with the market and we see a wide variety of uses for the technology, from clothing to windows, to smart buildings to UAVs to mobile charging stations.”