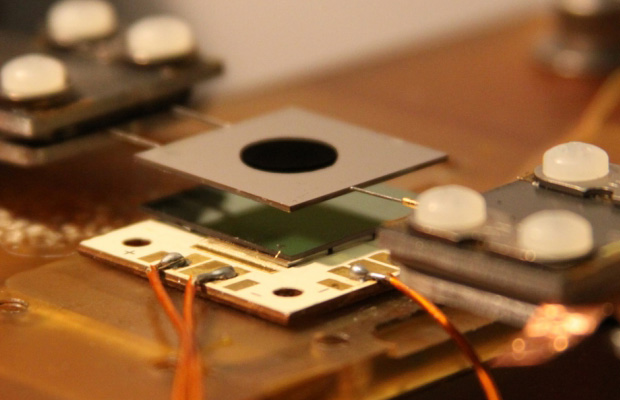 Researchers at MIT demonstrated a device based on a method that enables solar cells to break through a theoretically predicted ceiling on how much sunlight they can convert into electricity.

A single-layer cell made of silicon is used for the vast majority of today’s solar panels — the upper limit of these cells is about 32 percent. But there are ways to increase that overall efficiency, such as by using multiple layers of cells, a method that is being widely studied, or by converting the sunlight first to heat before generating electrical power. It is the latter method, using devices known as solar thermophotovoltaics, or STPVs, that the team has demonstrated.

The findings are reported in the journal Nature Energy, by MIT doctoral student David Bierman, professors Evelyn Wang and Marin Soljačić, and four others.

All research in traditional photovoltaic faces the same underlying theoretical limitations, Bierman says, “With solar thermophotovoltaics you have the possibility to exceed that.”

Theory predicts that in principle this method, which involves pairing conventional solar cells with added layers of high-tech materials, could more than double the theoretical limit of efficiency, potentially making it possible to deliver twice as much power from a given area of panels.

“We believe that this new work is an exciting advancement in the field,” said Wang “as we have demonstrated, for the first time, an STPV device that has a higher solar-to-electrical conversion efficiency compared to that of the underlying PV cell.”

The research team used a relatively low-efficiency PV cell in the demonstration, the overall efficiency of the system was only 6.8 percent, but in direct comparisons it clearly showed the improvement enabled by the STPV system.

The basic principle is simple: Instead of dissipating unusable solar energy as heat in the solar cell, all of the energy and heat is first absorbed by an intermediate component, to temperatures that would allow that component to emit thermal radiation. By tuning the materials and configuration of these added layers, it’s possible to emit that radiation in the form of just the right wavelengths of light for the solar cell to capture. This improves the efficiency and reduces the heat generated in the solar cell.

“The carbon nanotubes are virtually a perfect absorber over the entire color spectrum,” said Bierman allowing it to capture the full solar spectrum. “All of the energy of the photons gets converted to heat.” Then, that heat gets re-emitted as light but, thanks to the nanophotonic structure, is converted to just the colors that match the PV cell’s peak efficiency.

The photonic device producing emissions based on heat rather than light means it would be unaffected by brief changes in the environment. In fact, if coupled with a thermal storage system, it could in principle provide a way to make use of solar power on an around-the-clock basis. The biggest advantage of these systems would the promise of continuous on-demand power.

The team conducted tests using a photovoltaic cell with the STPV components, first under direct sunlight and then with the sun completely blocked so that only the secondary light emissions from the photonic crystal were illuminating the cell. The results showed that the actual performance matched the predicted improvements.

“A lot of the work thus far in this field has been proof-of-concept demonstrations,” Bierman says. “This is the first time we’ve actually put something between the sun and the PV cell to prove the efficiency” of the thermal system.

The team’s next steps include finding ways to make larger versions of the small, laboratory-scale experimental unit, and developing ways of manufacturing such systems economically.