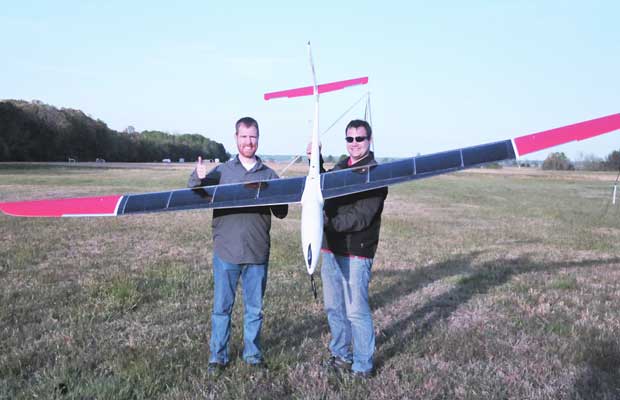 Researchers at the U.S. Naval Research Laboratory (NRL), Vehicle Research Section and Photovoltaic Section are building on the proven concept of autonomous cooperative soaring of unmanned aerial vehicles (UAVs). Their research investigates the presence of solar photovoltaics (PV) to the cooperative autonomous soaring techniques, which enables long endurance flights of unmanned sailplanes that use the power of the Sun.

The Solar Photovoltaic and Autonomous Soaring Base Program and the U.S. Marine Corps’ Expeditionary Energy Office (E2O) want to improve the ability of unmanned platforms to support a 24-7 information, surveillance, and reconnaissance (ISR) mission. By doing so, the warfighter will greatly benefit because it will reduce the amount of batteries or fuel they must carry into battle, and improve the availability of continuous coverage of ISR assets.

“NRL has twice flown our solar UAV [based on the SBXC sailplane] over 10 hours using a combination of solar photovoltaics and autonomous soaring as part of the ‘solar-soaring’ research program,” said Dr. Dan Edwards, aerospace engineer. “This research is investigating the value of combining autonomous soaring algorithms and solar photovoltaics for capturing energy from the environment to extend flight endurance and mission operations of an aircraft.”

A photovoltaic array, custom built in NRL’s Vehicle Research Section and Photovoltaic Section, is integrated into the center wing panel of the PV-SBXC aircraft as a drop-in replacement to the original wing. A power management and distribution system

converts the power from the solar arrays into direct current (DC) voltage, which the electric motor can use for propulsion, or recharge a ‘smart battery.’

Additionally, an autonomous soaring software algorithm — that would typically monitor the local vertical winds around the aircraft — commands the aircraft to orbit in any nearby updrafts, very similar to soaring birds. However, the algorithm was disabled for the two solar flights in order to assess the solar-only performance. Passive soaring — meaning no specific maneuvers are attempted to catch thermals — was still allowed, to let the aircraft turn the motor off if altitude increased because of an updraft along the aircraft’s pre-defined flight path. The autonomous soaring software was tested extensively in previous flight demonstrations in late October 2015.

The UAV with solar arrays built at NRL using SunPower Inc. solar cells, flew for 10 hours, 50 minutes on October 14, 2016. Takeoff occurred at 7:20 a.m. at 95 percent battery state of charge and landing occurred at 6:10 p.m. with the battery at 10 percent state of charge. Thermal activity was very good in the middle of the day and 40 percent of the flight was spent with the motor off, and the solar array partly recharged the battery while the motor was off.

The UAV equipped with solar wings incorporated PV arrays from Alta Devices, Inc. It flew for 11 hours, 2 minutes on April 19, 2017.

The power management system for both flights was provided by Packet Digital, Inc., as part of a grant from the North Dakota Renewable Energy Council.

“The experiments confirm significant endu-rance gains are possible by leveraging thermal updrafts and incident solar radiation, rather than ignoring these free sources of energy,” Edwards said. “Future testing will focus on quantifying the trade space between improvements in solar cell efficiency and combining with autonomous soaring for improved solar-recharging.”

The Vehicle Research Section at NRL con-ducts research to develop technologies for autonomous, affordably expendable, unmanned systems that carry a wide variety of payloads for numerous mission scenarios. The Section is composed of aeronautical, aerospace, electrical, and mechanical engineers, scientists, and technicians dedi-cated to advancing the state-of-the-art in unmanned systems technology.

The Photovoltaics Section at NRL conducts research to develop photovoltaic (solar cell) technologies to enable logistics free, renewable, portable, power sources for the warfighter. The Section is composed of physicists, electrical engineers, and chemists dedicated to advancing the state-of-the-art in PV power sources and systems.