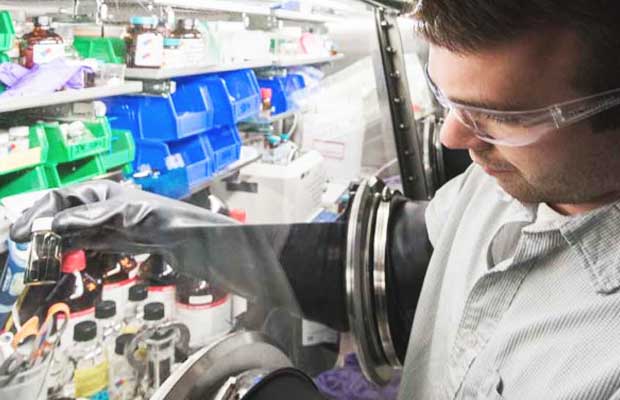 Researchers at the U.S. Department of Energy’s National Renewable Energy Laboratory (NREL) have developed new designer quantum dot systems with greater control over beneficial properties for photo-electrochemical and photovoltaic solar applications. The scientists were able to chemically modify lead sulfide (PbS) quantum dot surfaces so that their ionization energy– the amount of energy needed to remove a single electron from the solid– could be varied systematically from 6.5 eV to 4.1 eV (greater than a 2 eV change). “What we showed here with quantum dots is they can be very flexible chemical systems. You can tune their ionization energy over a very large range of values in a very systematic way,” said Matthew Beard, a senior scientist within NREL’s Chemical and Biosciences Center and lead author of a new paper in Nature Communications, Tuning colloidal quantum dot band edge positions through solution-phase surface chemistry modification. Beard’s NREL co-authors are Daniel Kroupa, Elisa Miller, Jing Gu, and Arthur Nozik. They were joined by University of Chicago researchers Marton Voros and Giulia Galli and Brett McNichols and Alan Sellinger from the Colorado School of Mines. Quantum dots (QDs) are considered to be pseudo-atoms that have highly tunable opto-electronic properties. Researchers are studying films of QDs as functional solids in a variety of applications, including solar cells and solar photo electrochemical cells.

The ionization energy of a typical solid is determined from the constituent atoms and, in general, cannot be modified. In QD solids, however, the ionization energy, as well as other beneficial optoelectronic properties, can be modified in controlled and rational ways. Their work presents clear design rules for tuning the ionization energy over a large range of values. NREL’s research also established the fundamental principles that govern the relationship between a quantum dot and ligand, which are organic molecules attached to the surfaces of a QD. Prior studies have shown that modifying the interface between a PbS QD and a ligand produces different chemical systems, but a clear and quantitative relationship hasn’t been reported until now. NREL researchers worked with seven specific ligands, chosen from a field of more than 500 possibilities. Knowing the specific design rules allows for rational design of functional semiconductor systems. “You can really dial in the properties you want,” Beard said.

NREL is the U.S. Department of Energy’s primary national laboratory for renewable energy and energy efficiency research and development. NREL is operated for the Energy Department by The Alliance for Sustainable Energy, LLC.