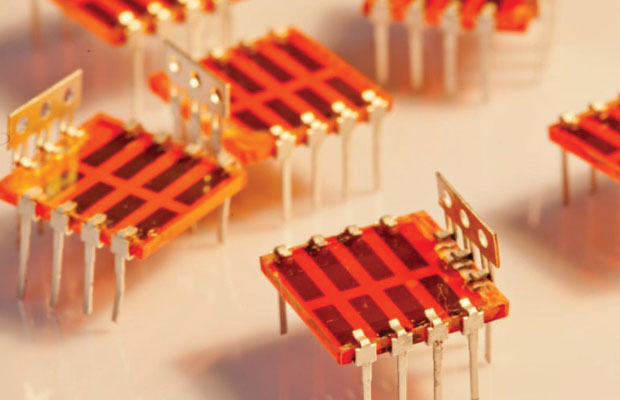 Researchers have demonstrated how a non-toxic alternative to lead could form the basis of next-generation solar cells.

The team of researchers, from the University of Cambridge and the United States, have used theoretical and experimental methods to show how bismuth — the so-called “green element” which sits next to lead on the periodic table, could be used in low-cost solar cells. Their results, reported in the journal Advanced Materials, suggest that solar cells incorporating bismuth can replicate the properties that enable the exceptional properties of lead-based solar cells, but without the same toxicity concerns. Later tests by another research group showed that bismuth-based cells can convert light into energy at efficiencies up to 22%, which is comparable to the most advanced solar cells currently on the market.

Most of the solar cells which we see covering fields and rooftops are made from silicon. Although silicon is highly efficient at converting light into energy, it has a very low “defect tolerance,” meaning that the silicon needs to have very high levels of purity, making it energy-intensive to produce. Over the past several years, researchers have been looking for materials which can perform at similar or better levels to silicon, but that don’t need such high purity levels, making them cheaper to produce. The most promising group of these new materials are called hybrid lead halide perovskites, which appear to promise a revolution in the fi eld of solar energy.

“We wanted to find out why defects don’t appear to affect the performance of leadhalide perovskite solar cells as much as they would in other materials,” said Dr Robert Hoye of Cambridge’s Cavendish Laboratory and Department of Materials Science & Metallurgy, and the paper’s lead author. “If we can figure out what’s special about them, then perhaps we can replicate their properties using non-toxic materials.”

In collaboration with colleagues at MIT, the National Renewable Energy Laboratory and Colorado School of Mines in the US, the Cambridge researchers have shown that bismuth, which sits next to lead in the periodic table, could be a non-toxic alternative to lead for use in next-generation solar cells. Bismuth, known as the “green element,” is widely used in cosmetics, personal care products and medicines. Like lead, it is a heavy metal, but it is non-toxic. For this study, Hoye and his colleagues looked at bismuth oxyiodide, a material which was previously investigated for use in solar cells and water splitting, but was not thought to be suitable because of low efficiencies and because it degraded in liquid electrolytes. The researchers used theoretical and experimental methods to revisit this material for possible use in solidstate solar cells.

The bismuth-based devices can be made using common industrial techniques, suggesting that they can be produced at scale and at low cost. “Bismuth oxyiodide has all the right physical property attributes for new, highly efficient light absorbers,” said co-author Professor Judith Driscoll, of the Department of Materials Science and Metallurgy. “I first thought of this compound around five years ago, but it took the highly specialised experimental and theoretical skills of a large team for us to prove that this material has real practical potential.” “This work shows that earlier theories about bismuth oxyiodide were not wrong, and these compounds do have the potential to be successful solar cells,” said Hoye, who is a Junior Research Fellow at Magdalene College. “We’re just scratching the surface of what these compounds can do.”