Next-gen solar cells could be improved by atomic-scale redesign 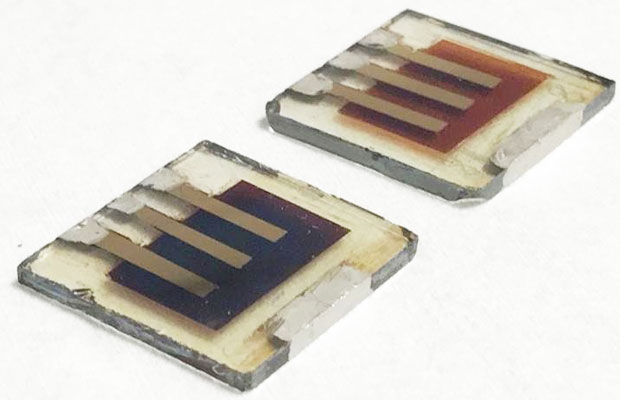 Solar cells harness energy from the Sun and provide an alternative to non-renewable energy sources like fossil fuels. However, they face challenges from costly manufacturing processes and poor efficiency — the amount of sunlight converted to useable energy.

Light-absorbing materials called organic lead halide perovskites are used in a new type of solar cells that have shown great promise, as they are more flexible and cheaper to manufacture than traditional solar cells constructed of silicon.

However, perovskite cells degrade rapidly in natural conditions, greatly decreasing their performance in a matter of days. This is one reason they are not currently widely used.

Previously, a team led by scientists from the Department of Chemistry at Imperial discovered that this breakdown is due to the formation of ‘superoxides’ that attack the perovskite material. These superoxides are formed when light hitting the cells releases electrons, which react with the oxygen in the air.

Now, in a study published in Nature Comm-unications, the team have determined

where iodide is missing. These vacant spots are then used in the formation of superoxides.

The team found that dosing the material with extra iodide after manufacturing did improve the stability, but that a more permanent solution could be to engineer the iodide defects out. Lead author of the new study, Nicholas Aristidou from the Department of Chemistry at Imperial, said: “After identifying the role of iodide defects in generating superoxide, we could successfully improve the material stability by filling the vacancies with additional iodide ions. This open up a new way of optimising the material for enhanced stability by controlling the type and density of defects present.”

added: “We have now provided a pathway to understand this process at the atomic scale and allow the design of devices with improved stability.” Currently, the only way of protecting perovskite cells from degradation by air and light is to encase them in glass. However, perovskite solar cells are made from flexible material designed to be used in a range of settings, so the glass encasement severely limits their function.

Dr Haque said: “Glass encasement restricts movement and adds weight and cost to the cells. Improving the perovskite cell material itself is the best solution.” The team hope to next test the stability of the cells in real-world settings. The cells would be exposed to a combination of both oxygen and moisture, testing the cells in more relevant scenarios.