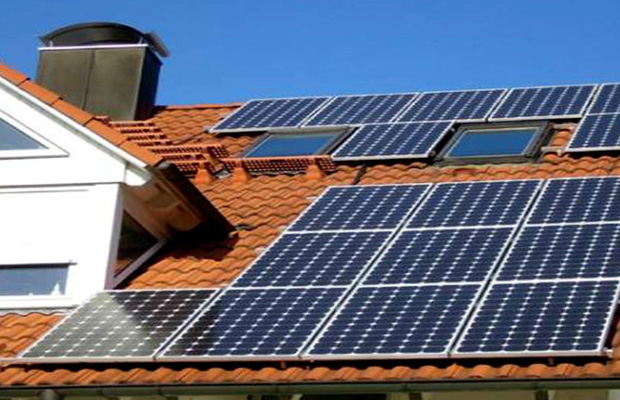 The solar panels work best when they receive sunlight for longer period of time they are mounted at an optimal tilt and should face southwards. Today rooftops provide you the opportunity to turn unused space into an energy-producing, cost-cutting asset. There are several ways to mount solar panels to maximize solar exposure and energy production. With technology advancement the rooftop mounting has become hassle-free.

The solar panels are mounted on specially-designed racks to secure them in place as per structural and safety requirements. If the wind speeds are high in a state, one has to set up systems which can withstand a three-second burst of 90 mile-per-hour wind.

The panels placed on roof are fixed in place to their racking system at an optimized angle so that it can gather most direct sunlight available. Ideally, a building in India facing southwards should receive at least 5-6 hours of sunlight in winter. More solar power can be achieved by ensuring that there are no obstructions within a 45-60 degree arc on either side of true south.

When installing rooftop solar panels structural integrity should be given prime importance. You may face several problems if systems are attached poorly to the structure or if the building is not able to withstand the weight of the system.

Joe Byles, an aerospace engineer has developed a non-penetrating, sloped-roof solar mounting system for asphalt shingle roofs which may bring far-reaching benefits to the solar industry if commercialized.

The system developed by Texas-based inventor is expected to remove the need to penetrate a roof as possibility of leaks is a key concern among homeowners.

He built several prototypes each with different polymer and ballast combinations and used everything from high-power leaf blowers to mounting small sections on his truck driving at 100 mph on back-roads to check the performance.  The result was a ballasted friction plate connected to a solar panel with L-shaped feet, the friction plates with a 3/16-in. thick, semi-rigid material looks like mouse-pad

The material uses a cross-linked polymer which is non-flammable and weighs about 6 lb/sqft without a solar panel. Using plates, users can install solar panels in seconds, without any need for roof penetrations. You can manage wires with clips and bonding pins to keep the system grounded.

Byles solar mounting system can withstand wind, fire and loading – shows his in-house tests. “You have the shingle, and then you have the cross-linked polymer with a cell structure to it so when you increase the weight or wind pressure on it, it moves a little bit, but the cell structure is designed as such that it make the bond stronger,” said Blyes.

The friction plate remains intact on rooftop like lizard stays attached to a vertical window. Blyes’s polymer material comes with an expanded cell structure which represents a composite surface area much greater than the apparent area the friction plate is covering.

When asked ‘will heavy rain weaken the bond’? Byles said that nothing would happen because it’s an open cellular structure and rain can move through the cells without disturbing the intimacy between roofing material and polymer.

The system without added material and labor costs for roof penetrations would also reduce costs and length of ROI. The best part of Byles’s system is that if you are planning to sell your house or re-roof you can simply need to lift each panel off the roof, just the way you set it down.