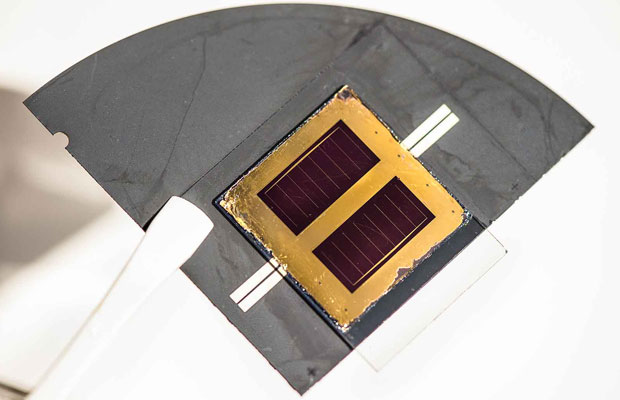 A team of researchers led by Taiho Park at Pohang University of Science and Technology (POSTECH), Korea, has found a new method to improve not only the efficiency, but stability and humidity tolerance of perovskite solar cells.

The Korean researchers designed a hydrophobic conducting polymer that has high hole mobility without the need of additives, which tend to easily absorb moisture in the air.  Park and his students, Guan-Woo Kim and Gyeongho Kang recently published their findings in Energy & Environmental Science.

The hole transport layer plays significant role because it not only transports holes to the electrode but also prevents perovskite from being directly exposed to air. Spiro-MeOTAD, a conventionally used hole-transport material, needs additives due to its intrinsically low hole mobility. However, Bis(trifluoromethane)sulfonimide lithium salt (LiTFSI), one of the common additives, is prone to suck in moisture in the air. Moreover, Spiro-MeOTAD forms a slightly hydrophilic layer that easily dissolves in water, and thus it cannot work as a moisture barrier itself.

Researchers focused on an idea of an additive-free (dopant-free) polymeric hole transport layer and designed and synthesized a hydrophobic conducting polymer by combining benzodithiophene (BDT) and benzothiadiazole (BT). The new polymer with face-on orientation, which helps vertical charge transport of holes helped the researchers achieve high hole mobility without any additives.

Park and his team confirmed that the perovskite solar cells with the new polymer showed high efficiency of 17.3% and dramatically improved stability — the cells retained the high efficiency for over 1400 hours, almost two months, under 75% humidity.

“We believe that our findings will bring perovskite one step closer to use and accelerate the commercialization of perovskite solar cells,” said Taiho Park, a professor with the Department of Chemical Engineering at POSTECH.