Market analyst IHS Markit has issued its first forecast for 2018 installations. It expects the global market to surpass the 100 GW mark for the first time ever, hitting 108GW. IHS Markit is predicting another recording breaking year for solar in 2018, forecasting installations to hit 108 GW by the end of the year.

The analysts state that continued demand from China will be the key driver behind this growth, as the country has successfully diversified its market and achieved strong momentum in the distributed generation segment.

The latest edition of IHS Markit’s PV Demand Market Tracker highlights how China has now become the priority market for domestic manufacturers, something likely to shape the market in 2018.

“Short supply and higher than anticipated module prices in the first half of 2018 will impede many market outside China, due to worsening project economics,” says Edurne Zoco, Research and Analysis Director at IHS Markit.

“Projects in some regions might be delayed or even cancelled, because market prices are higher than were estimated during the planning phase.”

While demand from China is expected to remain strong, question marks remain over other leading PV markets, as the U.S. industry awaits the President’s final decision in the section 201 case, and India mulls the introduction of anti-dumping duties.

While it still expects these two to remain the second and third largest PV markets, respectively, IHS Markit warns that in the U.S., the section 201 case has already begun to distort the supply/demand relationship, as developers have been stockpiling modules ahead of the decision, and that planned tax reforms could also weaken investor interest in the sector. 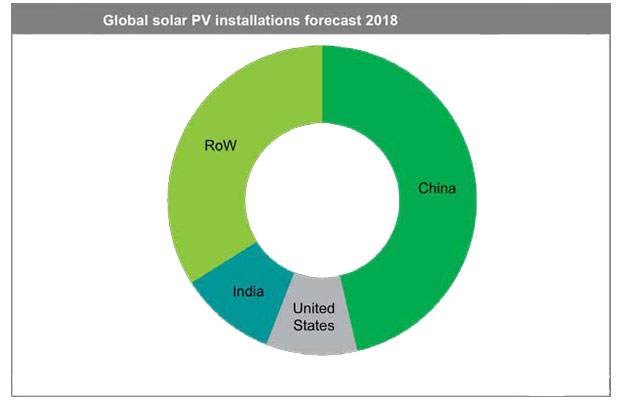 Meanwhile in India, IHS warns that that raising anti-dumping duties could limit the number of modules on the market, unless domestic manufacturers are able to ramp up very quickly.

This forecast will leave little room for unexpected demand increases – as occurred in 2017, unless polysilicon is also able to quickly grow.

“Exceeding 108 gigawatts of PV installations is close to the top-end of what can be achieved, based on the global polysilicon manufacturing capacity,” said Zoco. “Supply will therefore be tight throughout the first half of the year at least, resulting in stable to higher prices across the supply chain.” Recently, in its 4Q Global PV Market Outlook, Bloomberg New Energy Finance predicted similar installation numbers. With stabilization of the polysilicon market expected, improved cost-efficiencies on the upstream side and increased efforts to meet 2020 energy targets in Europe, demand in 2018 should be between 94 and 111 GW; and 107 and 121 GW in 2019, it said.