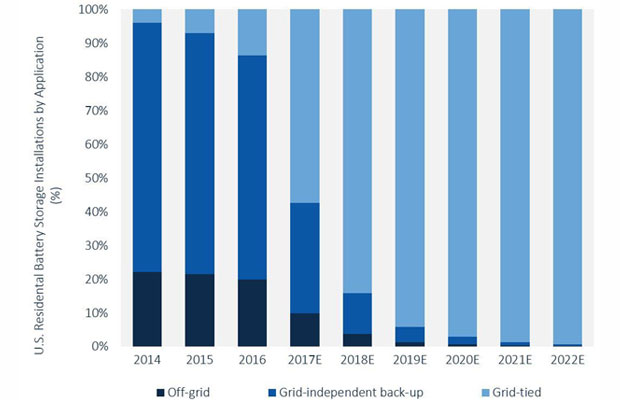 A new report from GTM Research has determined that for the first time ever, grid-tied residential battery storage deployment will overtake that of the traditionally-leading off-grid and grid-independent battery storage systems across the United States in 2017.

Further, and astonishingly, GTM Research predicts that by 2022 grid-connected sys-tems will account for 99% of new dep-loyments, with off-grid and grid-independent backup deployments remaining relatively flat.

According to GTM Research, this massive shift in battery storage trends is being driven both by homeowners and utilities, each of which are doing so for a different set of reasons: Homeowners are looking for backup power or for monetary savings, while utilities are looking to mitigate the effects of so much variable electricity making its way into the grid by way of high solar penetration.

“It is most instructive to think of the residential battery market not as a monolithic entity, but rather as a patchwork quilt of geography- and homeowner-specific applications that will be stitched together over time,” the authors of the report note. “Each application lends itself to a specific set of system requirements, which may potentially overlap with the requirements for other applications. Further complicating the matter, homeowner preferences and site-specific constraints may alter or limit what can be achieved by a given system.”