Under the global net-zero carbon goal, the safety of power stations is of great concern. Since this year, inverter manufacturers have successively released inverters with DC protection switches, various experts in the industry have discussed the protection capability and standard compliance of DC side switches and given different opinions. The following are related reports from various media:

The debate focuses on whether safety can be achieved only with disconnectors without adding protective devices such as fuses or circuit breakers under the system design of “more than 2 access strings in a single MPPT“. In today’s market, such products have been applied in practical power stations. How about the actual protection capacity? The author has carried out on-site reverse connection and backflow tests to verify the safety performance of the system.

Reverse connection, wrong connection and short circuit often occur on inverters during actual construction, installation, operation and maintenance, which may easily lead to safety risks, so the system protection capability of the equipment is very critical.

Each MPPT of the selected equipment was connected with 5 strings of PV modules, and the on-site single string current was nearly 20A. One string of the equipment was selected for the reverse connection test of positive and negative electrodes. After being inversely connected, this string formed a loop with the other 4 strings, in which the current then flew back to this string and form a backflow current of 70A. 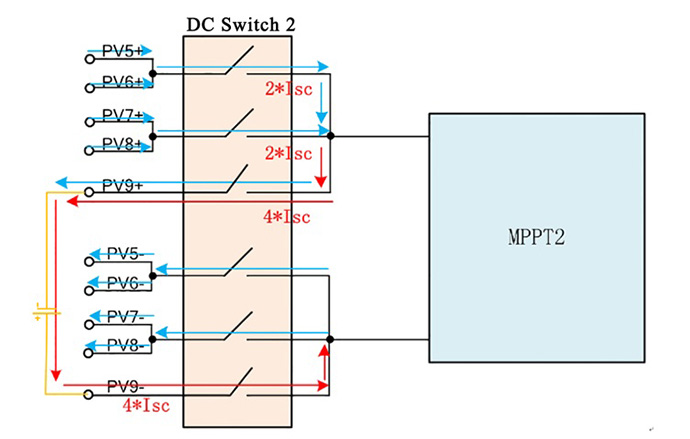 After the first test was triggered, the disconnector took protective action, but tripped after 240ms, which is different from the turn-off capability of 15ms advertised by the manufacturer.

After the second test was triggered, the disconnector failed to trip, protection failed, and the backflow current always existed, resulting in a sharp rise in the temperature of modules in the corresponding strings. And the diode temperature of one module exceeded 150 ℃ and burst on the spot, which is a great risk of fire.

At present, most power stations are in complex environments. Due to the large laying area of PV modules in power stations, there are often many factors such as uneven illumination, occlusion, aging of modules, etc. Inconsistent illumination or power generation of each module could easily lead to a voltage difference in the string, which would result in current backflow. Failure to effectively protect the system may cause safety risks.

Therefore, one of the inverter strings was selected to carry out the backflow test, so that one string of modules maintained a certain voltage difference with the other 4 strings in the same MPPT, causing current from the other 4 strings to flow back to the fault string and the current backflow reaches 30A. Three rounds of testing were carried out under the above conditions. 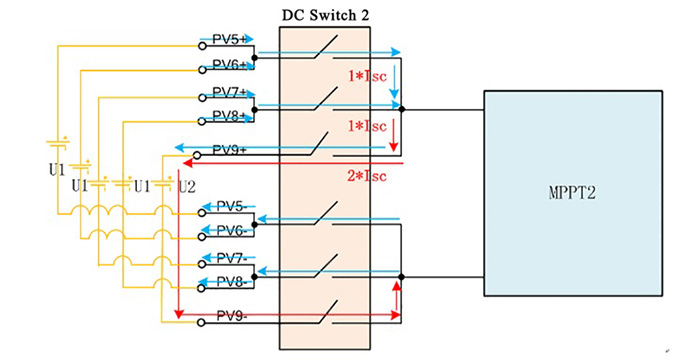 After the first two tests were triggered, the disconnector took protective action, but tripped after 250ms, which is very different from the turn-off capability of 15ms advertised by the manufacturer.

After the failure occurred in the 3rd test, the disconnector failed to trip, protection failed, and the temperature of corresponding modules and circuits rose sharply, among which the module temperature soared by 49 ° C (to 76.8 ° C) in one minute. If it could not be disconnected promptly, the temperature would continue to rise, which may cause the modules to catch fire and burn out.

These tests show that when one MPPT is connected to more than 2 strings of modules, the disconnector cannot provide effective protection and may cause damage, fire or even greater risk to the modules.

To sum up, disconnectors can be used as redundant protection to improve the safety of the system, but not as necessary protective device for the system, and can not replace the fuses or circuit breakers specified in the standard. In a system where there are more than 2 access strings in one MPPT, overcurrent protective devices such as fuses or circuit breakers that meet the standard requirements must be provided. Safety issues must be treated seriously.

Note: The article is based on inputs from a global inverter firm.