The global concentrated solar power market is predicted to reach USD 8.92 billion by 2025, according to a new report by Grand View Research, Inc. increasing awareness about renewable energy along with government regulations to control growing carbon footprint is further propelling the market growth. 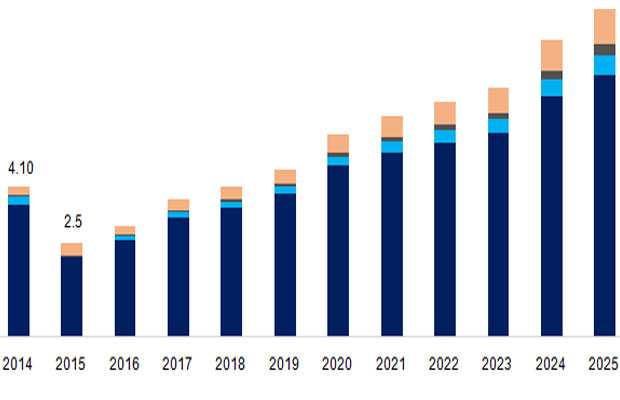 Growing electricity demand along with rising investments to augment the efficiency index will provide an impetus to the concentrated solar power market growth. The Federal Government sponsored USD 9 million towards the research and development of six new CSP projects in the country, to reduce the total project costs though technological growth.

Substantial reduction in the component costs along with supportive government incentives like energy certificates, and carbon credits will expand the concentrated solar power market over the forecast period. Regulators around the world have been encouraging grid integration, making it an affordable alternative compared to nonrenewable energy sources.

Concentrating Solar Power technology can store solar energy in the form of heat, even post sunset, which is perceived as the greatest advantage that it offers over all the other competing technologies. Reliable power supply coupled with flexibility in usage assist in bridging the demand supply deficit, currently faced by nations especially in the developing world. However, CSP technology is capital intensive as compared to other solar thermal technologies, as this may prove to be a restraint for the its adoption over the forecast period.

In terms of technology, the parabolic trough technology held over 75% of the global concentrated solar power market share in 2016. Matured technology coupled with affordable costs as compared to other forms of available systems will positively influence the growth of the concentrating solar power market over the forecast period. Power tower technology was valued over USD 955.5 million by 2025. Enhanced heat storage ability, higher efficiency, and favorable capacity factor will augment the business growth.

• The U.S. concentrated solar power market, in terms of value, will witness growth of over 18.9% over the forecast period. Favorable government initiatives like tax credits; installation cost subsidies among other benefits will augment the business growth.

• In Morocco, climatic conditions are favorable to the growth of CSP technology adoption, in tandem with the existing pipeline projects. Morocco concentrating solar power market is expected to exceed USD 852.2 million over the forecast period.

• Spain concentrated solar power market size is set to exceed USD 1.22 billion by 2025. Spain is the market leader with the maximum installed capacity in the world as of year 2017.