According to the 2011 national census, agricultural and related sector activities employ 54.6% of the total workforce and contribute to 17.8% of the nation’s Gross Value Added (GVA). These stats show that despite the digital transformation that has taken place in the country, India is fundamentally an agrarian economy. 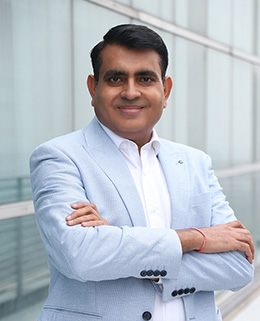 Under its Mission 500GW, India has planned nearly 50% cumulative electric power installed capacity from non-fossil fuel-based energy resources by the year 2030, with renewable energy making up 50% of all energy requirements. The next goal is India’s Net Zero goal, which is a significant advancement in the worldwide fight to combat climate change.

After the US, it’s India which has the second-highest area of arable land, cultivating close to 60% of its land. India sees nearly 300 clear and bright days each year, and the quantity of solar energy that is accessible in a single year surpasses the total power generation of all the country’s fossil fuel energy sources. But an achilles heel for solar proliferation is the vast amount of acreage needed for solar energy production.

The one solution that could help India achieve solar and land optimization is Agrivoltaics.

Agrivoltaics is the practice of using land for both solar energy production and agriculture at the same time. Crops are typically grown beneath or in between the rows of solar panels in a conventional Agrivoltaics solar system, which consists of ground-mounted solar arrays. The panels can be mounted on structures that are tall enough for farming machinery to pass underneath.

The IEEFA (Institute for Energy Economics and Financial Analysis), in their 2021 report Agrivoltaics in India: Fertile Ground? points out the potential this innovation has in meeting India’s energy demands. The study states, India is a good fit for Agrivoltaics, especially given that agriculture now takes up 60.43% of the nation’s total land area. Additionally, it makes up around 18.8% of the overall GVA. Thus, Agrivoltaics is a perfect answer for India because a substantial section of the nation is engaged in agriculture. Using this technique, farmers may grow food on rich soil while solar panels provide electricity.

How India Stands to Win with Agrivoltaics

Another key study, titled Agrivoltaics in India, executed by National Solar Energy Federation of India (NSEFI) in association with the Indo-German Energy Forum (IGEF) asserted the immense value Agrivoltaics can offer to India’s agriculture and renewable energy needs. The study hypothetically draws conclusion from what would happen if 5.5 acres of land, which can support 1 MW of agrivoltaics, were used for the technology. This would result in a total potential of 629.69 GW being realised from net area sown (agricultural) lands alone. For fallow areas and other uncultivated lands, the potential for Agrivoltaics is 49.50 GW and 56.6 GW, respectively.

Beyond these numbers, there are also a host of other gains that it offers:

Once plants reach what is called the light saturation point, too much sunlight is not advantageous to them. Instead, it may result in increased water use and possibly stunted growth. Crops planted under solar panels are not only protected from high temperatures, but their yield also increases considerably. Solar panels can also be adjusted to get the ideal quantity of sunlight.

Some crops grow more well with solar panels than they do in more traditional environments. For instance, an APV system in a tea plantation farm in Assam can massively profit from being shaded under panels.

In addition to assisting in temperature control, solar panels’ shadow also helps to significantly reduce water evaporation. As a result, it aids in increasing soil moisture, enabling farmers to keep crops at the ideal water level. A “light saturation point” is a feature common to all plants. When a plant reaches this stage, sunlight no longer promotes growth but instead raises stress and water needs. You can keep crops from reaching their light saturation threshold and experiencing stress by developing an agrivoltaic system.

The plants’ requirement for extra water is reduced by the low-stress environment provided beneath the solar panels. Additionally, the solar panels’ shade keeps soil-based moisture from evaporating. Farmers won’t need to irrigate as frequently because the plants will need less water and more water will be retained in the soil.

Agrivoltaics with a rainwater collection system together is a unique idea. In order to use it later for irrigation and PV cleaning, farmers can collect rainwater from solar panel arrays and store it in storage tanks. Studies show that it enables farmers to capture a substantial amount of rainwater that falls on the panels, offering a workable remedy for the water shortage brought on by climate change.

Some farmers might earn more money without putting in more labour by installing solar. Aside from their crops, farmers can earn money through programmes including virtual net metering and solar renewable energy credits (SRECs). Large factory farms, erratic global trade policy, and shifting climatic circumstances all pose daily threats to small farms. The extra cash generated by adding solar helps keep many farms viable when they otherwise wouldn’t be able to.

Agrivoltaic systems have the potential to increase agricultural land’s adaptability to climate change, particularly in dryland environments where farmers already face challenges from rising temperatures and water scarcity. Agriculture can be supported while also producing more clean energy thanks to agrivoltaics.

Though there are obstacles, it is possible that using the land for both food production and energy production would yield twice as many outcomes. Not all crops can be cultivated under the panels, and in climates without significant seasonal changes, the panels’ ability to regulate temperature is less effective. Despite this, there is no doubt that the dual-use of land would stabilise the rising demand for solar energy and allow farmers access to a new source of income. More potential to combine more agricultural activities with PV systems will be made possible by advancements in the usage of tracking systems and transparent PV modules.