“Internet of Things” is expected to make life more efficient and cities “smarter” connecting an extensive network of tiny communications devices. But these machines need lot of energy.  Instead of adding to the global reliance on fossil fuels to power the network, researchers have introduced a single device that harvests wind and solar energy. The research has appeared in the journal ACS Nano. 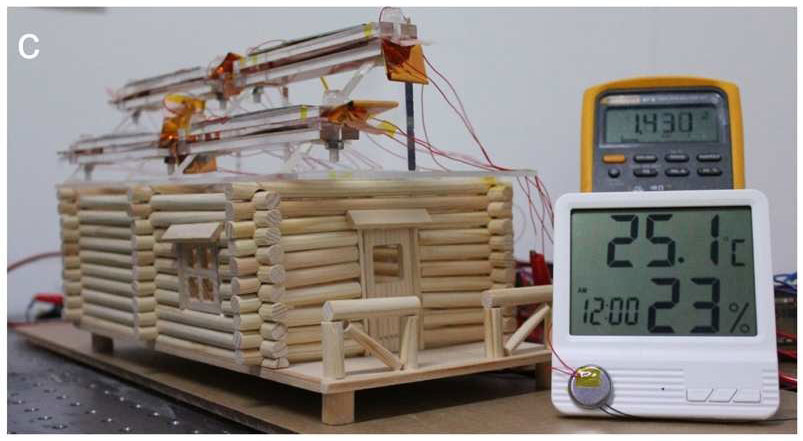 According to industry experts tens of billions of gadgets will make up the Internet of Things within just five years. Generating sustainable energy in cities close to where the devices will be used is quite challenging. Cities don’t have enough space to install wind turbines, so researcher Ya Yang, Zhong Lin Wang and colleagues wanted to find a better way to power smart cities.

The researchers have integrated two energy harvesting technologies in one device: a silicon solar cell and a nanogenerator that can convert wind energy into electrical output.

The solar cell component of the system delivers 8 milliWatts of power output (1 milliWatt can light up 100 small LEDs). The wind harvesting component delivers up to 26 milliWatts. Together, under simulated sun and wind conditions, four devices on the roof of a model home could turn on the LEDs inside and power a temperature-humidity sensor. Installed in large numbers on real rooftops, the hybrid device could help enable smart cities.

Researchers said “we rationally design a hybridized nanogenerator, including a solar cell (SC) and a triboelectric nanogenerator (TENG), that can individually/simultaneously scavenge solar and wind energies, which can be extensively installed on the roofs of the city buildings. Under the same device area of about 120 mm × 22 mm, the SC can deliver a largest output power of about 8 mW, while the output power of the TENG can be up to 26 mW. Impedance matching between the SC and TENG has been achieved by using a transformer to decrease the impedance of the TENG. The hybridized nanogenerator has a larger output current and a better charging performance than that of the individual SC or TENG.