Home » Magazine Exclusive » What Solar Panels Do at Night?

What Solar Panels Do at Night?

Sun is the prime source wherein solar panels efficiently convert sunlight into electricity. But why can’t solar panels gleefully generate electricity at night. Righto! The designing and technology of solar panels have been developed to work with sun. Few experts argue that Moonlight can be used to power PV cells at cost of 345:1. That is, a panel that would normally produce 3450 W at high noon would produce only 10 W of power during the full moon. The quarter moon (50% illumination) would likewise produce only 5 W, and so forth. Concentrating moonlight using reflective or refractive techniques would enhance the wattage. As long as the light has a wavelength within 400-1127 nm (violet to near-infrared) the PV cell will convert it to electricity. Some say in near future we will have a technology called “Lunar Panel”. Present solar panel needs energy of 1.1 eV (equal to band-gap of Silicon) to create electron-hole pair which moon light cannot provide due to less intensity (less energy).

If in future, we are able to replace Silicon with a material whose band-gap is equal to energy provided by moon light then solar panel or say, Lunar Panel can be used at night for electricity generation. Presently, since solar panels can only produce power during the day, the question then becomes “how will solar panels provide power overnight when there is no sunshine?” There are two primary solutions that help to resolve that problem. Net metering and solar-plus-storage technology allow your solar panel system to access electricity overnight when solar panel production is dormant, either through connection to the electric grid or to a battery. Thanks to grid connections and solar energy storage, solar panels are a sustainable round-the-clock energy solution. This will also solve the problem of battery requirement for storage. To move beyond our wildest dreams of solar panel working at night we have to understand the possibilities and practicability behind to make it a reality. 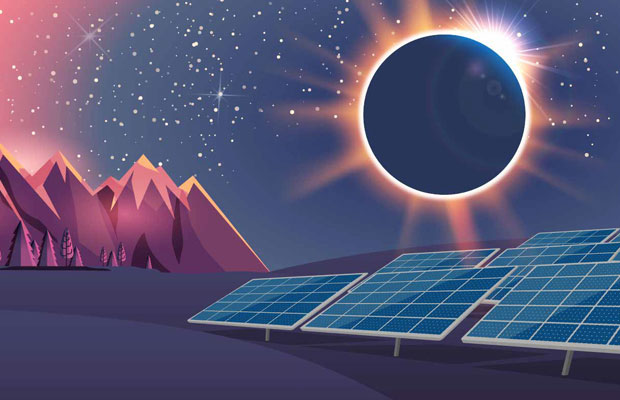 Exploring the Night and its Light

Moonlight is just sunlight that has been reflected by the moon. Of course it’s down by a factor of about 1/350. But it’s still something. If you’re designing concentrated solar energy a collector tracking the Moon is a great way to test out your system without having to worry about cooling or dealing with very high energy densities. Once you’ve tested your system under moonlight you can advance to sunlight once you’re sure you’re Cooling and tracking and focusing and anything else are all performing well with moonlight which you can track with a camera and won’t melt anything like concentrated sunlight will. I spent two years developing a concentrated solar photovoltaic system. Dealing with 1000 x concentrated sunlight can be very scary. Dealing with 1000x concentrated Moonlight is like dealing with 3x sunlight. Still a little powerful but not nearly as dangerous as 1000x sunlight, notes Leo Baldwin, B.Sc. Honours Applied Physics, University of Waterloo – Faculty of Science.

Few argue that to understand if solar panels can work at night one has to first understand two factors:

1. How much threshold energy does that particular solar panels(photovoltaic cell) needs to operate or strike off electrons and get charge for storage . There are many types of solar panels depending on their materials. Even now, researchers have used ultraviolet and infrared wavelengths to get charge. Hence we should know the wavelength range and power emitted in each electromagnetic spectral range.

2. What is the range of wavelength of that particular source? In this case this is moonlight.

The solar thermophotovoltaic (STPV) cell is an idea to concentrate sunlight onto a solar cell, grab most of the solar spectrum, and convert it to the wavelength that photovoltaic prefer. The multilayer STPV cell incorporates an absorber made of carbon nanotubes that absorb most of sun’s spectrum and convert it to heat, and an emitter made of a silicon photonic crystal that glows when heated. The emitter’s output is tuned to the wavelength at which PV cells operate most efficiently: 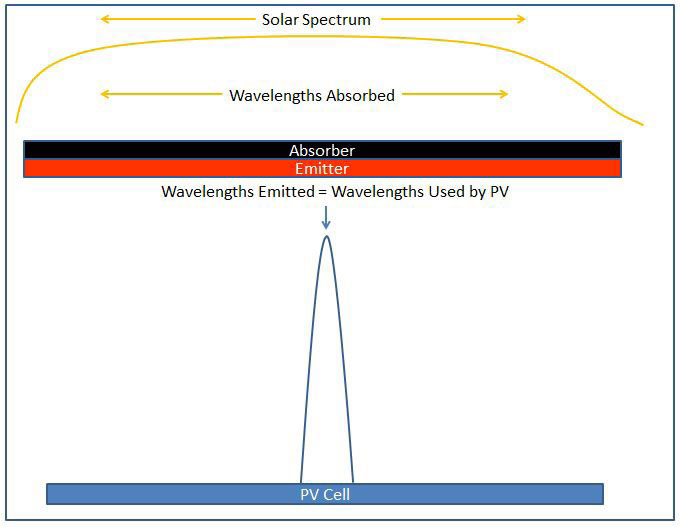 What happens at night? Heat can be stored more easily than electricity, so solar panels made of solar thermophotovoltaic (STPV) cells can generate electricity at night, assuming they hold on to the heat that they absorbed during the day. The researchers are a little sketchy about how the heat would be stored. I’m wondering if the emitter material can have a relatively large thermal mass, so it heats up slowly and retains its heat after the sunlight disappears. That way, instead of getting a burst of energy when the sun is shining and nothing after sunset, you’d get a more steady energy production day and night.

STPV isn’t exactly a new idea; the MIT researchers simply improved its performance. Past attempts at using STPV cells have produced experimental efficiencies of around 1%. MIT’s team brings that up to 3.2%. They believe that with slight improvements, STPV will soon achieve around 20% efficiency, making it competitive with today’s PV panels. Theoretically STPV could reach 80% efficiency, according to Dr. Evelyn Wang, associate professor of mechanical engineering at MIT, one of the lead researchers on this project. But even at 20%, the ability to store energy as heat and convert it to electricity later gives STPV an edge over a 20% efficient PV panel.

Another research work from U.S. Department of Energy’s (DOE’s) Argonne National Laboratory of designing designed an inexpensive thermal energy storage system that will be significantly smaller and perform more than 20 times better than current thermal systems. With funding from DOE’s SunShot Initiative, the Argonne team is building a pilot-scale prototype of their high-efficiency latent heat thermal energy storage system (LHTES) for testing. The SunShot Initiative is a national collaborative effort to make unsubsidized solar energy cost competitive with other forms of electricity production by 2020.

Argonne’s thermal energy storage system relies on a “phase-change” material that melts as it stores thermal energy and releases energy as it re-freezes similar to the charge-discharge cycle in a battery.

Inexpensive salts like rock salt (sodium chloride) can be used as phase-change materials, but their use in existing thermal storage systems is limited because of the poor thermal conductivity of the salts.

However, the Argonne LHTES system drastically improves the conductivity of these salts by integrating them with a high-conductivity graphite foam. This combination reduces the overall amount of material needed to build the system and its cost, while making the thermal energy transfer significantly more efficient and still providing up to 8 to 12 hours of energy storage – a typical night of storage for a concentrating solar power plant. “Phase-change materials tend to have low conductivity but meet the heat energy storage requirements,” said Dileep Singh, leader of Argonne’s Thermal-Mechanical Technologies group.

“High-conductivity graphite foam meets the conductivity requirements, so we thought: why not combine the two?” The porous graphite foam traps the salts in pores, facilitating rapid melting and freezing. The team demonstrated that this rapid phase change holds up over time. After building and testing an initial prototype about the size of a blender, the team is now scaling up the prototype size by 50 times. Although still smaller than a full-scale power plant system, the pilot-scale modular system will be tested this fall and could expand on applications, such as providing backup power on a microgrid or storing waste heat from another energy source. The pilot system will also further improve 3-D thermal modeling used for estimating performance and planning the design of a full-scale system.

“We are looking at developing the fullscale power plant system as a modular system, and the pilot-scale system we are building this year can actually be used as one module within a full-scale system that is made of many modules stacked or organized together,” said Argonne mechanical engineer Wenhua Yu. “Therefore, the performance characteristics we will measure from testing the pilot can directly reflect those of a power plant system.” The full-scale design is expected to meet the needs of current power plants that operate steam turbines at about 450 to 600 degrees Celsius (850-1100 degrees Fahrenheit) using magnesium chloride as the storage medium. When advanced supercritical carbon dioxide turbines — which are more efficient than steam turbines but operate at a hotter 700 degrees Celsius (1,300 degrees Fahrenheit) — come online, the same design can be used with sodium chloride. While there are some researchers in Mexico who are close to producing solar panels that work at night, nothing is commercially available yet and likely won’t be for many years.

Today, researchers continue to come up with concepts, prototypes, and technology with the potential to not only be cost-effective, imprinted on flexible materials, and would be able to harvest the energy from the sun in order to work even after the sun goes down. One of the companies that have tapped into this research and development is the Idaho National Laboratory. Their technique involves embedding square spirals of conducting metal onto a sheet of plastic. These sheets are called nanoantennas.