What Happens When Low Quality, Unproven Materials are Used in Solar Panels?

The quality of PV modules and the materials used in them can be best assessed by evaluating their performance in the field. Challenging climatic conditions, like those in India, cause severe environmental stresses for PV materials in the field over their lifetime. Materials with poor durability can degrade quickly, so materials must be chosen carefully. Material degradation can lead to premature, faster power degradation, electrical safety hazards or even catastrophic failures of solar PV systems.

Though PV modules manufactured by different suppliers look similar, different Bill of Materials (BoM) are used, and module performance varies significantly based on the materials used. Understanding the field performance of different modules and materials is crucial to differentiate between good and poor quality materials to ensure reliable, durable, safe operations for PV systems.

DuPont initiated an extensive global fielded module inspection program to study module aging and degradation and analyze root causes. Many modules from the field have been taken to DuPont PV labs for detailed analysis. The learnings can be used to strengthen the module selection process for project developers, EPCs, banks, and others. This article focuses on key findings from the inspections of solar installations and recommendations based on the extensive analysis done on the fielded modules. 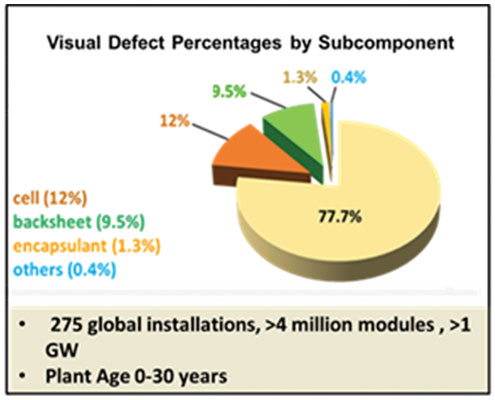 The focus of this study was to inspect solar panels to understand the real aging and degradation of modules in the field. The study included visiting more than 275 installations (>1GW) and inspecting more than 4 million modules installed around the globe. 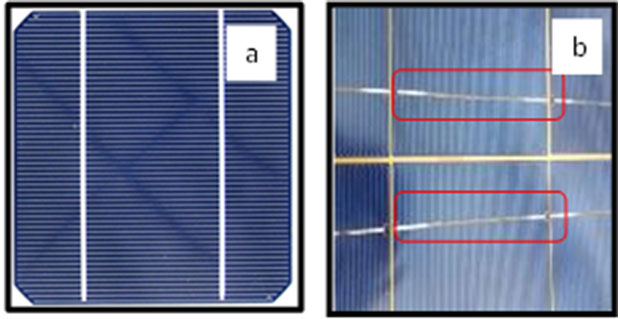 Figure 2: a) Snail trails along cell crack; b) Ribbon corrosion

The visual changes in cells mainly included snail trails. Snail trails, as shown in figure 2a, is a discoloration of fine silver grid lines on the front side of the cells, which develop mostly along the cell micro-cracks. This phenomenon occurs due to a reaction between EVA encapsulant and silver grid lines in the presence of oxygen and UV light. [ref 1] Snail trail defects confirm the presence of cracks in the cells that can impact the power generation of the module over time.

Solder Ribbon Corrosion- can be seen as a color change on the flat wires used to interconnect individual cells – in many modules as shown in figure 2b. This defect can lead to increased resistivity and, in extreme cases, can lead to ribbon break and module power loss.

The most common encapsulant defect observed was yellowing of EVA as shown in figure 3a, due to constant exposure to UV radiation and elevated temperature. Yellowed EVA was predominantly observed in older modules.

Figure 3: a) EVA Yellowing; b) Encapsulant delamination from glass

This defect can reduce light transmission by up to 6%, directly impacting power generation [2,3]. Another issue related to encapsulant was its delamination from the front glass as shown in figure 3b due to poor material selection or lamination process in production. Based on the severity of delamination, this defect can significantly reduce light transmission and drop power output. 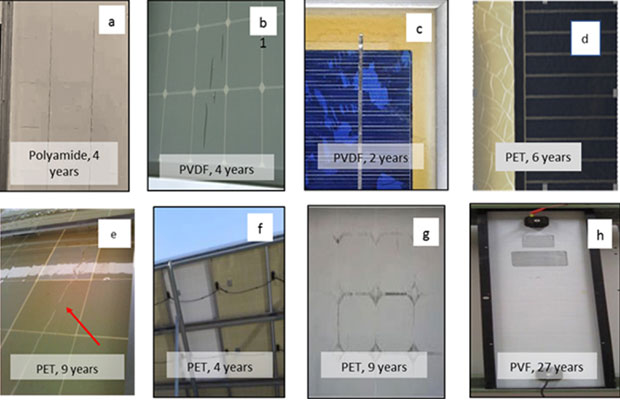 Cracking is typically associated with the loss of mechanical properties and increase in brittleness of the backsheet material / materials due to exposure to UV radiation, heat and humidity. The brittle material eventually cracks due to thermal stress caused by day-night changes in the temperature.

Many backsheet types are observed in the field [ref. 4,5], such as backsheets based on Polyamide film, PVDF Film, PET Film, Fluoropolymer coatings, and Tedlar® PVF film as outer layers. Typical observations are shown in figure 4. Note the Tedlar® PVF based backsheet (figure 4h) shows no visible defects and the field had <0.5% annual power loss at 27 years of service.

In many cases, the cracking of backsheet inner / outer layer was leading to current leakage, which is a serious safety hazard. Moreover, in some cases, the defect led to significant power loss in the form of module ground faults (no power output) and inverter tripping (no power output from the whole block).

Field studies conducted by DuPont clearly demonstrate that modules with different materials behave differently in the field. Low quality materials degrade quickly when exposed to environmental stresses that can negatively impact power generation and safety performance of the modules.

Moreover, defects such as backsheet cracking are becoming frequent in young modules and highlight the risk of using unproven materials. It has become critical for stakeholders investing in PV plants to give more importance to BoM while selecting panels to specify and ensure use of right materials rather than leaving it to the discretion of module suppliers.

DuPont has developed a set of specifications for key PV materials based on the data collated from the field studies. Please write to us if you are interested in BoM specifications or discussing the results of these studies in detail.