With over 100 operational airports, civil aviation in India has emerged as one of the fastest growing sectors in the country during the last three years. India is currently considered the third largest domestic civil aviation market in the world. India’s passenger traffic grew at 16.52 per cent year on year to reach a whopping 308.75 million in FY18. In FY 19, while the numbers are projected to grow over 12.7%, the weight on the environment by the industry is also slated to grow exponentially. With the IATA predicting a 6.1% growth rate post 2019 for the next 20 years, Indian aviation could witness 527 million journeys per year by 2037.

The aviation sector already has a disproportionately high carbon footprint, thanks to the sheer scale of airports, besides the use of aviation fuel, and all else that keeps an airport ticking. With the large areas that airports occupy, the sheer size offers opportunities for more environment friendly remedial measures. Today, from using recycled materials, to water harvesting to zero plastic zones, airports are doing everything they can to reduce the carbon footprint. But the big area for transformation is solar energy plants, which help offset electricity consumption from fossil fuels.

Already, we are seeing that among the first things airport operators are doing today, to become ‘greener’, is to set up solar energy plants. For this, the industry has the Cochin International airport to thank, which has been a trailblazer globally, when it comes to leveraging solar energy to make a real impact goes. In fact, if one goes by the figure at Cochin airport, at 30 MW, it truly opens up the possibilities at airports across the country. A spokesperson for an EPC player involved with some of the work at an Airport for AAI says that “ we have estimated a total potential of close to 500 MW at airports, and linked infrastructure areas like cargo terminals, hangars etc”. It’s an opportunity that should play out over the next 3-4 years. Now, the white paper on National Green Aviation policy, released on March 11 for feedback, has a clear mention of making provisioning for solar energy generation mandatory for all new airports. For the largest Airport Operator by numbers, the Airports Authority of India, which alone manages 126 airports (both civil and Military and others), waiting for a greenfield development is not enough. An analysis of the tendering on its site for the past six months shows that tenders have been taken out for over 20 MW of solar installations, at smaller airports across the country. This is a trend that can only firm up as prices are a lot more competitive now.

Besides the public sector Airports Authority of India, the GMR Group and GVK Group are the other two major players in aviation industry. The two run some of the biggest airports in the country, with Mumbai and Bengaluru managed by GVK, while GMR runs Delhi and Hyderabad. The two are likely to be joined soon by the Adani Group, which has successfully bid for managing five airports (Ahmedabad, Jaipur, Mangaluru, Thiruvananthapuram, and Lucknow) at the recent airport tenders. The good news is that while both GMR and GVK are already looking at and using Solar Power at their airports, the Adani Group is likely to be even more aggressive , thanks to its extended solar operations.

So just what are these major airport managers doing at their respective airports?

GMR currently has 3 airports in pipeline and runs 2 airports, one each in Delhi (IGI) and Hyderabad . The two serve about 94.22 Million passengers via 248 routes. At the Delhi Airport GMR Group has installed 7.84 MW solar plant at IGI airport, which was the first airport in India to have a mega solar plant at airside premises. That’s a big deal, because the airside premises is land contiguous to runways and other vital infrastructure, and is usually locked out from being used in any other way. Permissions to use it came in after a long period of testing, and augur well for similar utilisation of similar land at other airports across the country. GMR has set a target to produce 20 MW by 2020.

At GMR Hyderabad International Airport Limited (GHIAL) too the solar capacity was ramped to 5MW, though an update on future expansion plans was not available due to unavailability of GMR to respond to this story.

Both the airports have received ‘Leadership in Energy and Environmental Design’ (LEED) certification for unique design, which allows maximum natural lighting, and other features that enable optimal use of energy and water. 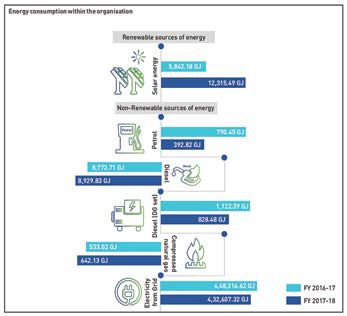 With a growth of more than 100% from last year in Renewable energy share, shows that the airport is in fact heading to the right direction. It also has a solar capacity of 5 kWp for providing green power for its operation. For this project, MIAL received “Gold” plaque award at the “ACI Asia- Pacific Green Airport recognition 2018”in Japan. The Mumbai International Airport is one of the most challenging and land constrained airports in the world when it comes to operations, handling more than 93 million passengers collectively.

MIAL operations has been carbon neutral since 2017 with 16% reduction in direct GHG emissions. Currently, GVK is in talks to buy stake of its partners, Airports Company South Africa (ACSA) and Bidvest Services in Mumbai International Airport (MIAL), a move that would help stave off a takeover bid by the Adani Group. On the other hand, the Bangalore International Airport Limited (BIAL) has set itself an ambitious target of running Kempegowda International Airport (KIA) completely on solar power by 2020. Currently, power demand at KIA is 11MW per day and airport authorities estimate it to increase to about 20MW after completion of the second terminal. The airport now generates 3.44MW from solar energy daily and the proposed capacity enhancement project will add another 8.35 MW in two phases, taking the total to about 12MW. While the 12MW would be from on-site energy generation, BIAL plans to source another 8MW of solar energy from off-site.

Airports all across the world have been including greener elements into their designs and operation strategies, as well as subscribed to eco-friendly initiatives. Like 6ft tall wind turbines on Boston Logan International airport or the famous Galapagos Ecological Airport which is run completely on solar and wind power, with 65% from windmills and 35% coming from photovoltaic panels fitted on walkways. The airports are fast becoming the cauldron of experimental designs and features to reduce emissions and increase energy efficiency. The renewable energy is panning out for aviation sector as Airports like to have more control over their electrical infrastructure and it is reliable too. RE allows their dayto-day operations to be less affected by global energy markets. This is a major advantage for the air travel industry, especially considering airlines’ profits often hinge on fuel prices. Which is why for most airports, solar makes the most sense. 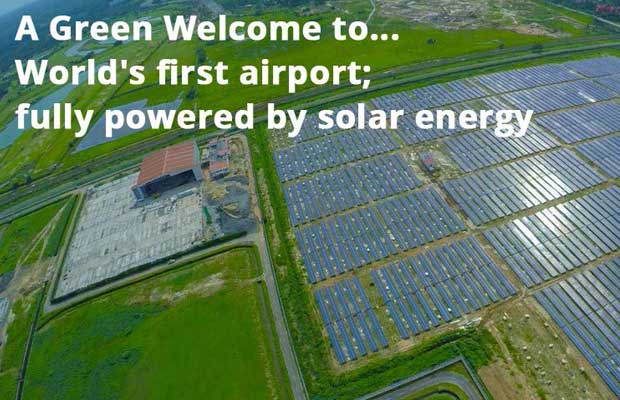 The seventh busiest airport in the country gets most of its energy from the 12 MW solar power project that has been set up within the airport complex, over 45 acres. Multiple panels were also installed across the entire facility which included car parks and roofs.

German company Bosch won the bid for Rs 62 crore to complete the project in 3 years. The project components include PV modules of 265Wp capacity manufactured by Renesola, and inverters of 1MW capacity manufactured by ABB India. With eight smaller hydroelectric power projects in the vicinity of the airport to take up the total energy generated to over 30 MW, with plans of increasing it to 40 MW.

In August last year, the airport suffered an estimated loss of over Rs 220 crores in the floods that ravaged the state of Kerala. CIAL management launched rebuilding of the damaged infrastructure including 2.5-kilometre long airport walls and its solar systems.

The solar power plant, which is reportedly the single largest solar project that has been constructed in an airport in India, is estimated to generate approximately 50,000 units of electricity daily. However, the solar plant does not have any battery storage, as it is connected directly to the grid, providing the grid as much power as it consumes, or more now.

In September, taking home the award for Entrepreneurial Vision, the Airport was recognized for its leadership in the use of sustainable energy. Globally recognised as the world’s first solar powered airport, for having its entire operations powered by solar energy.

The Airport officials have estimated the amount of carbon emissions to be reduced over the next 25 years would be equal to planting about 3 million trees. As an additional sustainability measure, the airport also houses an organic farm which over the past few years has yielded close to 80 tonnes of organic vegetables which are sold in the market and to the staff.