The Emerging Giants of the Oceans. Wind Energy Turbines

Solar might have grabbed most of the headlines, but wind energy has had its own march to relevance in the past couple of decades. In fact, on a like to like basis, wind energy has probably made bigger efficiency gains than solar power, where the biggest gains have been in price drops. And when we are talking wind energy, there really is one big parameter. Size. The size of the wind turbines has grown to levels that were literally barely dreamt of a couple of decades ago. The big boys of wind energy, which counts names like the Denmark-based MHI Vestas or even the Spain headquartered Siemens Gamesa Renewable Energy is today establishing wind farms where a single turbine is rated for 8MW of power or more. That’s a size that will require over 40 acres in a solar farm!

The phenomenal growth in size has had one major factor pushing it. The rise of offshore wind power. According to projections from the International Renewable Energy Agency (IRENA), global growth in offshore wind energy will continue to accelerate, with total installed capacity rising from 19.2 GW in 2017 to 520 GW in 2050. In fact, in 2018, global wind energy capacity crossed 600 GW, with offshore wind accounting for just 23 GW of the total.

Free from the limitations of risks on land, not to mention the protests from various groups, be it area residents or animal rights activists who believe wind turbines take an unacceptably high toll of bird life. The move to offshore installations has kicked off a race to bigger like nothing else. Firms like GE Energy have made huge bets on their bigger turbines, and with China finally moving into the offshore wind energy markets too, expect some serious heating up here too.

To understand just how much wind turbines have grown, you need to go back just three decades, a single life cycle really for a wind turbine, to see how the industry has evolved. From 55 to 75 KW in the 1980’s, to MW sized turbines in the 90’s, and now the immense effort GE Renewable Energy is putting behind its 12 MW Haliade X turbine. Yes, 12 MW. That’s over 200 times the size of the initial wind turbines that saw commercial duty in the 80’s. In fact, replacing that first batch of wind turbines from the 80’s right up to 2010 is probably the next big opportunity in Wind Energy. 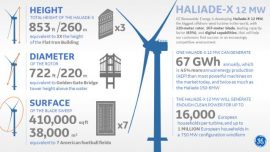 A giant by any number

With renewable targets going up all the time, it is no surprise that wind energy is expected to grow as well as solar, if not better, with a 25% CAGR predicted right up to 2030 for offshore wind energy.