With Budget 2021 finally behind us, India’s renewable energy sector, particularly solar has to reckon with a new reality finally. The renewable energy sector, especially solar, will have the government’s ear, but don’t expect any major moves anytime soon, as the government grapples with broader issues across the economy. Solar at least has the comfort of knowing this, because when it comes to wind energy, one wouldn’t like to be in the shoes of any wind energy developer right now. Not a mention in the budget, and certainly no indication from the MNRE or any other source on what to expect. 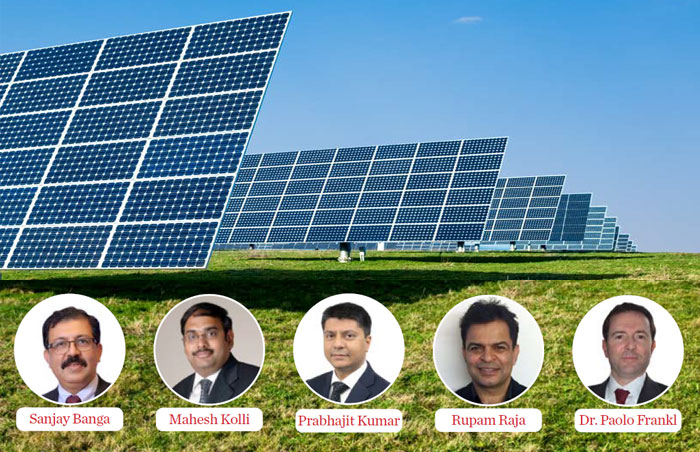 Irrespective, in a year when solar will definitely overtake wind energy capacity, just what does the year ahead hold for solar? We look at the three key issues that will determine success, namely, policy, politics and infrastructure and technology. What looks like a manageable challenge is financing, especially for larger projects and developers. Thanks to a global liquidity tap that stays ‘on’, and the irresistible attraction of the world’s third-largest energy market. Yes, it might take some extra resolve to stay the course with the vagaries of policy and challenges in India, but enough firms have made a decision to stay the course in the market here. Ditto for sourcing, with the government going with the status quo on the basic customs duty issue, and a token duty hike on solar inverters, from 5 to 20 percent. At a project share of around 5-6 percent, the net impact on costs is well within limits, we are told. Though manufacturers have already expressed their disappointment at the move, while hoping for a fresh take sooner than April 2022, the date everyone assumes will mark the next phase of the duty hikes on modules and cells.

Nothing explains the approach of the solar sector to government policy better than the fact that the sector is still to get out of ‘incubation’ mode. By that, we are talking about a sector that looks to the government for support at every step, and leaves it to the government to decide almost every key move. Thus, be it the shift of focus to utility projects while ignoring rooftop solar, the massive plans for solar pumps and their uncertain benefits, or the increasingly mixed results of the reverse auction approach, the industry has chosen to accept quietly, more often than not whatever the government has deemed fit. That is probably because of the efforts they see the government make to ensure payments on priority from Discoms for renewable generators, the ‘must run’ status for RE, or the renewable purchase obligations (RPO’s), which might just provide the next big push for the sector, should the Electricity Amendment Bill (2020) be passed anytime soon. However, there is clearly a shortage of ideas at the government too now, when it comes to scaling up annual capacity creation from a barely achievable 10 GW per annum to the 25 GW per annum that the 2030 targets imply for solar. Power Minister R.K. Singh, who also doubles up as the MNRE minister is clearly at the end of squeezing out ‘synergies’ from having both portfolios, as the contradictions of pushing for renewables over a strong, well entrenched and still critical thermal base come home. He in fact has been brave to champion renewable energy, ignoring the strong interests of the massive coal ‘lobby’ and the world’s largest coal miner, Coal India Limited. That India will need its thermal power for well into 2050 and beyond by every estimate only means that he can focus at most on retiring old plants that are farthest from coal pitheads, as these are the ones where renewables offer a cost advantage today. For now, the best hope on the thermal front is the retirement of old coal-based units totaling 25,252 MW that been estimated for the period 2022-30.

At a broader level, policy moves like the move to reform discoms with a Rs 3.6 lakh crore infusion over 5 years, or even the mandate to ensure 24X7 power for all have a strong influence on renewable growth, simply by creating space for them with the extra electricity demand and consumption that will result if India was to truly achieve 24X7 power. Post Budget, Sanjay Banga, President Transmission & Distribution, Tata Power, said that “Tata Power welcomes the step announced today for the distribution sector reforms as most of the Discoms are reeling under huge losses and finding it difficult to provide the uninterrupted power supply. We also welcome the scheduled discussion on the Electricity Amendment Act 2021 during the ongoing budget session as when implemented in its true letter and spirit, the Act will provide the much-needed independence to the regulatory mechanism for effective and timely decision making. It will also pave the way for speedier implementation of the National Tariff Policy, a must for the tariff rationalisation across all segments of consumers. This is very crucial for overall industrial development for realization of Atmanirbhar Bharat. Besides the above, for the revival of the power sector, the Government should use announced funds to provide transitional support to state governments who want to initiate distribution reforms by involving private sector players”

Asked to venture a best case scenario for peak consumption by 2023, experts we spoke to arrived at a figure of 225-230 GW, from the current 190 GW (approx.) of peak demand that was seen on Jan 28, 2020. That is a not so ambitious 10 percent growth for the coming two years. Importantly, these experts stressed that should these numbers happen, then it would also signal a momentum shift to maintain that growth path to 2025 and beyond. It’s a view that finds support from the Central Electricity Authority’s (CEA) own long term projections of consumption and capacities, as seen in the charts below from their latest Electric Power Survey (EPS). 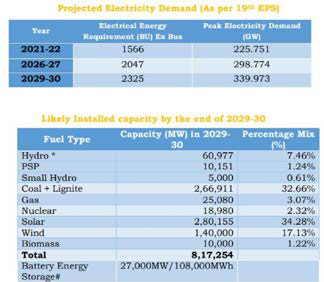 Politics: All But Convinced

The Politics of pushing for more renewables is surprisingly an issue that is much more manageable than people imagine, in this current ‘polarised’ environment. With solar costs dropping to almost grid level or even lower for some states, hitherto laggard states like Punjab have changed their views on renewable energy already. Punjab, which pays a premium for its thermal power due to distance from the source coal mines, is just one example. Other states like Rajasthan, Madhya Pradesh have already made huge plans. Outliers remain states on the Eastern coal belt, notably Bengal, Bihar, Jharkhand and Odisha. These states, with a combination of high population density, lack of ‘wasteland’ at the scale utility-scale projects demand, and low thermal power costs, have resisted the charms of renewable energy so far. But with a low industrial base and consumption, they simply have to shift future consumption growth to renewable energy to improve their own numbers and provide a market for renewables. For that, they need to improve their state discom finances too. Even Andhra Pradesh, the state that sent shockwaves through the sector when a new state government sought to cancel/renegotiate signed contracts, has not gone off renewables. Instead, the new government has actually mapped out its ‘own’ new and bigger 10 GW plan, which, which is progressing, albeit slowly. Other states like Karnataka in the south have gone a little slow simply because they added on renewables much earlier, mush faster, leaving them saddled with higher costs. As those projects mature and fresh demand is created, expect these states to adapt much faster. Especially in areas like repowering old wind energy installations, for instance.

When talking about infrastructure and technology, probably two areas come to mind for the former. Land availability and speed of upgrade and build-up of transmission infrastructure. Both have emerged as serious challenges, especially land, with ever-increasing demands for large solar parks. While that might be one reason for the relative absence of renewable energy in the densely populated and fertile Eastern states of India, the land issue is now becoming a cause for concern in larger states too. Both Rajasthan and Gujarat, states with massive solar plans have seen issues escalate around land acquisition in recent months, which need a better long term approach. Chances are high that the massive solar parks planned, from 30 GW in Gujarat or the 7 GW plus in Ladakh, might be the earliest, and last of their kind. The future of renewables might lie in smaller 50-100 MW parks, where land acquisition is far easier. This looks even more promising if one looks at the government’s resolve to monetize land banks owned by its own ministries and arms more effectively. Ministries like Railways are already focused on achieving ambitious solar targets like 3 GW on the back of its own and banks and buildings infrastructure. Technology will play its role, by allowing for consumption locally through regional grids, saving on transmission losses. Similarly, technology will be critical for something like the National Hydrogen Mission that has been declared in this years budget. The announcement couldn’t have come sooner, as further delays would have risked India meeting the same fate as its solar manufacturing industry in Hydrogen too. Keep in mind that till 2011, India was actually a quality destination for solar exports to the world, before the Chinese wave of manufacturing and R&D buried overtook us. To be globally competitive, the country will need to grow homegrown technology and manufacturing innovations, otherwise no amount of duty protection will help. Hydrogen, or green hydrogen production in that sense, provides that opportunity again.

Dr. Paolo Frankl, Head of Renewable Energy Division, International Energy Agency in his presentation at REINVEST 2020 had stated that the future of RE in the long term this decade is very important and this depended on the right policies. He predicted in 2025 renewable will surpass coal and will become a first-generation technology in the world. Besides storage, he stressed on the need for a wider technology portfolio for energy needs, be it optimized hydropower, offshore renewable and geothermal energy. Enhanced market and regulatory frameworks are critical to attract timely investment in grids and remunerate flexibility from dispatchable supply, storage and demandside response. Deeper commitments to emissions cuts would mean faster clean technology deployment and cost reductions, innovation for hydrogen and other low carbon fuels, battery storage and CCUS. He also emphasised the role of governments to attract affordable financing, accelerate the transition in building, industry and transport. Thus, technology and building at scale in Storage, and the whole solar cycle, will be much needed, with the proviso to innovate and build our own standards that deliver the same output through an India way.

The decade to 2030 has started with a nudge to the Renewable Energy sector to find its own feet. Be it financing, costs, or solving integration challenges, the industry will increasingly be expected to be proactive, rather than look to the government for solutions. Demand growth, and a slowdown or complete stop on thermal expansion, along with the retirement of old plants, offers renewable energy its best chance to expand its space. New areas like Hydrogen generation offer a technology-led opportunity to invest in and look for scale. A similar but tougher test awaits the sector in storage, where a strong case for battery storage especially is still not being made on cost considerations. The obsession with cost in fact is the best way to fall behind in the global race, and this is perhaps the one area where the government has to play a final hand, by creating an enabling environment for discoms and consumers alike, to allow a market to develop.