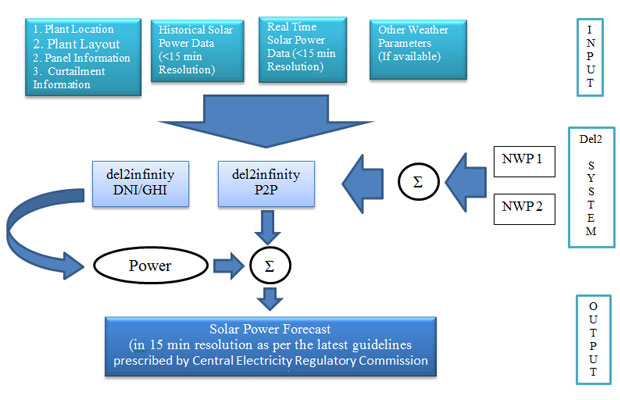 The demand of energy has multiplied manifold due to socio-economic development and this demand can be no longer satisfied by the traditional energy technology using local resources only. Hence the renewable energy is being seen as a transformative solution to meet energy demand as well as economic challenges. The solar power generation shows a promising future in India. But due to the variability and intermittency, large scale renewable energy penetration in existing grid is a challenge and proper policy and regulatory mechanisms, technological solutions and institutional structures are key issues in solar energy penetration. The Forecasting and Scheduling (F&S) of variable renewable energy (Solar and Wind) generation is an essential requirement of stable grid system due to the balancing challenge in load and generation.

A forecast model of solar power generation can be viewed as probabilistic evolution to generate different plausible patterns considering the unscheduled fluctuations. A good forecasting system is a process which gives proper accuracy with minimum penalty due to deviation even in small capacity of solar plants with high variability with minimum number of intraday revisions. Unnecessary submission of intraday revision in every one or two hour not only represents the inefficiency of forecasting algorithm but also represents the lack of availability of proper pattern recognition algorithm in forecast models.

The concept of forecasting and scheduling of renewable energy generators and the commercial settlement was introduced in Indian context by CERC through Indian Electricity Grid Code (IEGC), 2010. Considering the recent development of KERC regulations, it has come to our knowledge that SLDC has duly communicated that the regulation will be implemented effective from 1st June 2017, which is as per the scheduled date of implementation w.r.t KERC’s latest order on this regulation. The DSM penalty will be levied w.e.f 1st June 2017. The DSM charges are to be computed on a monthly basis. Hence IPPs have to submit their day-ahead power generation forecast and schedule (F&S) to SLDC to manage the grid stability.

According to the regulation, the forecasting & scheduling (F&S) of power generation can be submitted to SLDC using different options:

Hence while different IPPs are connected to the pooling station (PS), there may be different models for submission of the F&S to SLDC. Here in this article different model in communicating the F&S is described for an easy understanding.  The models are broadly categorized in two categories – A) Plant specific forecasting and B) Aggregated forecasting; and obviously each of the category has their own advantages and disadvantages.

Plant specific forecasting is useful not only to submit the F&S to SLDCs, this process is very constructive in determining the plant performances at IPP level. Moreover the commercial settlement in penalty due to deviation is comparatively simple. There is a common belief that due to law of large number and averaging out the positive and negatve error in forecasting methodology, the aggregated forecast in  solar power generation produce less variability. But factually the aggregataion at pooling station does not obey the law of large numbers and according to statistical theory, it is only applicable when the processes are random and have same probability or generation distribution.

With aggregation, the impact of forecast errors on individual plants is not as severe but the occurrence of bad generation of one plant affects the error of a plant having stable generation.

To simplify the F&S communation between IPPs and SLDC, different models can be considered as follows:

This model is a simplest model in communicating the F&S to SLDC. Here IPPs themselves do the forecasting and scheduling of the power generation and responsible for all related commercial transaction. This communication model does the plant specific F&S of each plant separately. This model is simple and effective. Few large IPPs advocates this model as they have separate organizational vertical in forecasting research. Till the time F&S services is accuracte in nature, this model is very effective.

Model B is an extended version of Model A in which some IPPs do not F&S for themselves but hire some Forecast and Scheduling Service (‘FSS’) providers to do the similar job. In this communication, SLDC gets the plant specific F&S for each plant and the commercial transaction is comparatively easy. Till the time F&S services of the FSS is accuracte in nature, this model is very effective.

Model C is the extended version of Model B in which the same FSS works for all IPPs connected to the pooling station but produces separate F&S for each IPPs and submit to the SLDC. Till the time F&S services of the FSS is accuracte in nature, this model is very effective.

Model D can be considered as a basic model of aggregated forecast. According to the regulation,  QCA is required to submit the daily F&S to SLDC in aggregated level. In this communication model, QCA may or may not have the proper forecast methodology hence can hire other FSS in doing this job. The penalty due to deviation is calculated on the basis of the available capacity of each IPPs or using the amount of energy generation in each time-block in which the penalty due to deviation is applicable.

Model E is an agrregator model in which QCA is not required but an Aggrgator is required. In this model, some IPPs have ther own forecasting methodology or hire some other FSS and submit their daily generation forecast to the agrregator, the aggregator submit the aggregated forecast to the SLDC. The penalty due to deviation is calculated on the basis of the available capacity of each IPPs or using the amount of energy generation in each time-block in which the penalty due to deviation is applicable.

In case of Model D & E, when the aggregator submits the BG, depending on the back to back BG / LC arrangement received from the IPP, then aggregator may not try to justify its stand or accuracy of forecasting before SLDC. It may be due to the reason that aggregator does have any responsibility for doing so and agreegator does not have any monetory benefit for the same. To ensure that the aggregator should protect the interest of the IPP and justify its stand for accurate forecasting, reasonable penal provision should be incorporated in aggregator scope & responsibility in its agreement.

Generally forecasting companies are very small entity or start up in respect of their paid-up share capital or economic capability or networth.As an example, total BG to be submitted for around 3GW wind power is more or less Rs 13,25,26,000/- which will 3 times of the paid up share capital of all the top 3 FSS in India. It will be very tough to believe that all of a sudden if F&S company turns aggregator feels that they have reach the competency or financial capability to stand before the SLDC. Moreover, there is not procedure established by law or process specified in the regulation in case there are any dispute, how such dispute will be resolved. SLDC shall have the BG in hand, so to restrain SLDC from encashing the BG needs a court or KERC order in case of inaccurate forecasting, which will be impossible if there is no agreement/arrangement between the aggregator & SLDC. Moreover the locus standi of the agreegator shall be raised before such court or commission.

In view of such scenario, Model A,B & C, wherein IPP still have an option to approach the court/ commission, which will not be very simple if there is aggregator in between. In the undertaking submitted by the aggregators, the aggregators have expressly waived all its right to challenge the order/ judgement of SLDC in case of accuracy.

Now the question will be judgeing the judges, as SLDC is the final authority to decided the accuracy of the F&S, then who shall be judgeing their competency or calculation. There will be several revisions by various FSS, if SLDC fails to consider all such revision then what measure shall be available with the FSS. Other state SLDCs have already started charging for the revisions, if KA-SLDC also starts charging the same, as they are absolute authority holder.

Moreover few IPPs or its subsidiary is planning to act as an agreegator, then the question will be their impartiality as an agreegator. For the sake of argument, if suppose there is a penalty on such agreegator, then such agreegator shall always distribute the penalty propoertionate to the capacity, without getting into the merit about the actual situation. What will be the process to ensure that aggregator shall be forced to act properly and reasonably? If the agreegator starts to favour any of the IPPs irrationally then other IPPs shall suffer unnecessarily.

Forecasting and scheduling of variable energy generation is a requirement for stable grid management and communicating those F&S to SLDC in proper way is essential to minimize the variability of solar power generation, penalty due to deviation and the difference in opinions of different stakeholders in the system. Hence proper choice of commucation model is required depending on different situations and scenarios.