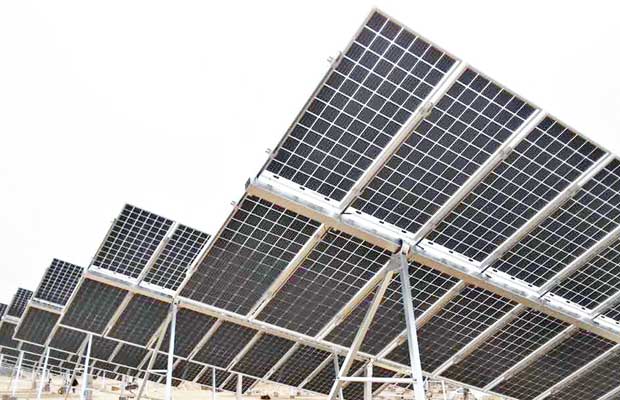 Height from peak of rotation axis’s center to the ground: 3.6 m Rotation range of azimuth: – 45° ~ plus 45° The pictures of the project are as follows:

As it can be seen from the two comparisons:

This project which was invested by Elion Resources Group, turnkey system solutions charged by Xi’an Longi Clean Energy Co. Ltd, and the facilities were provided by Jiangsu Xietong new energy technology Co. Ltd. It took only 26 days from the launch day to the grid-connection.

In many applications, the Double-sided PV module, a new hotspot of the component recently, has good power-generation capacity i.e. high efficiency at the front side and multiple power generation at the back side. In order to lower the cost of electricity, to improve integrated generation capacity of the power plant and to reduce the cost of power generation, the doublesided PV module along with tracker and good quality inverter has become best project portfolio selection.

Besides, the climatic characteristics of Kubuqi desert belongs to the typical Semi-arid plateau of continental climate with middle temperate zone, strong solar radiation, abundant sunshine and higher ratio of direct sunlight. Here, the combination of double-sided PV module and trackers are expected to increase the power generation more than 35%.

However, as a typical desert power station project, the wind and sand factors affect the direct sunlight, especially the reflected light of the background and the scattered light surrounding. On the back of high frequency of variation of maximum power point of the double-sided PV module, MPPT of the inverter required to be efficient in tracking its maximum power point rapidly and with stability.

Further, this characteristic of an inverter is a significant guarantee that the power generation from the double-sided PV module can be converted efficiently. In addition, since the working environment of this project was at high-temperature in the desert area, this shows that system equipment will work properly in hightemperature environment for long time. So the equipment needs to have the operational capability of long-term reliability and stability in high-temperature environment.

Otherwise, problem in any part of the system may arise and it will affect the integrated generation capacity of the system. Thus, inverters from Ginlong Solis ensure long-term reliability and stability in operation in a high temperature environment. With its great temperature protection capability, Solis inverter can perform normally under 45° ambient temperature, with key components temperature rise up to max 150°.

The variation of maximum power point of the Double-sided PV module is more complex than that of traditional components. This component receives direct sunlight to generate electricity from the front side, while the back side generates electricity by absorbing reflected light from the background and scattered light from the surrounding. Since, power generation on the back is significantly affected by the light intensity received on the back.

So, it is required that the inverter must have a faster and more stable MPPT to adapt to this component, and the tracking frequency of MPPT should be higher. Here Ginlong Solis’50kW series inverter incorporates highspeed DSP chip having high computing speed and PWM resolution, and also adopts more advanced and precise MPPT algorithm, which can adapt to the fast changing sunlight intensity. It also has high tracking accuracy, which can match the complex variation of the maximum power point of the Double-sided PV module better.

According to the professional efficiency evaluation of EN5530, Static MPPT efficiency of Solis inverter is more than 99.5%, MPPT precision adjustment (<1V/S), this MPPT can ensure that the tracking power point is exactly stable near the maximum power point of the component, and more importantly, it can guarantee the conversion efficiency of the photovoltaic system, thus improving the power generation. When compared with traditional components, the single block output power of doublesided PV module is larger and the range of power variation is wider. Therefore, the range of input and output power of the inverter is also required to be wider.

Thus, if the range of input and output of inverter is wider then more components can be accessed and the excess output capacity will be stronger. Further, Dc input power of Solis inverter can reach 1.2 times above of rated input and output power can reach up to 1.1 times of rated output. While ensuring DC ratio and power generation efficiency, the number of inverters can be reduced. Thereby saving costs and shortening the cycle of investment return. How to convert and transmit the electricity smoothly? Project construction client finally chooses GCI_50k_HV inverter from Ginlong Solis after multiple comparisons.

Inverters from Ginlong Solis have the characteristics of high MPPT efficiency, low start-up voltage, low grid voltage, high switching frequency and high power generation efficiency. They can provide guarantee for high-quality and efficient transmission of solar power energy to this project in such climatic conditions. The high reliability of Solis inverter can also provide convenience for later operation and maintenance of this project. Meanwhile, this project has provided technical support for the application of photovoltaic pioneer program.