Solar to operate the complete Vizag Port from March 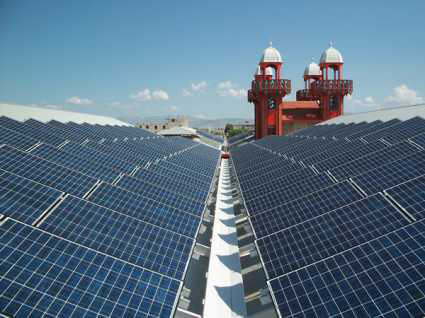 After all the fizz, chairman M T Krishna Babu clarifies that the Vizag port of Andhra Pradesh will run its entire operations on solar power from next month.

Visakhapatnam Port Trust has already commissioned 2 MW solar capacity and will add another 8 MW by March 20, he said at a roadshow here ahead of Maritime India Summit 2016, to be held in Mumbai in April. “We will be the first major port in the country to run entire port operations on solar energy,” Krishna Babu said, adding VPT has spent Rs 60 crore to set up the plants. Devendra K Rai, Director, Union Ministry of Shipping, said the target is to operationalise 135 MW of solar power projects by 2020 in eight major ports — JNPT, Paradip, Kamarajar, Kandla, V O Chidambaranar, Visakhapatnam, Kolkata and New Mangalore. He said 50 MW of wind energy projects are also planned to be developed in V O Chidambaranar, Chennai and New Mangalore ports during the period.

Rai also said that consulting firm McKinsey has submitted a draft National Perspective Plan and made a presentation to Union Minister for Road Transport, Highways and Shipping Nitin Gadkari recently. “It (the draft NPP) will be put on website for feedback very soon. ”This particular plan will guide us for the next 10-20 years as to how the maritime sector as a whole can grow,” he said. Rai added, “We are developing 78 lighthouses (including 34 island lighthouses) as tourist hubs and cruise terminals at Mormugao, Chennai, Mumbai and Cochin.” He said while ports have capacity to handle more cargo, “the situation regarding (inadequate) capacity of Railways is a major concern”. Director of Ports, Government of Andhra Pradesh, V Ravi Kumar, said development of four new ports is on the anvil in the state. S N Venkatraman, Convenor, CII Telangana EXIM Panel and Vice-President, ITC Ltd, suggested to the government of Telangana, a land-locked state, to establish ‘dry ports’ and develop strong infrastructure to link it with the sea ports in Andhra Pradesh.

Johnson Engineers Limited of NOIDA and Visakhapatnam Port Trust signed a MoU in November for installation of solar panels, operation and maintenance for seven years.