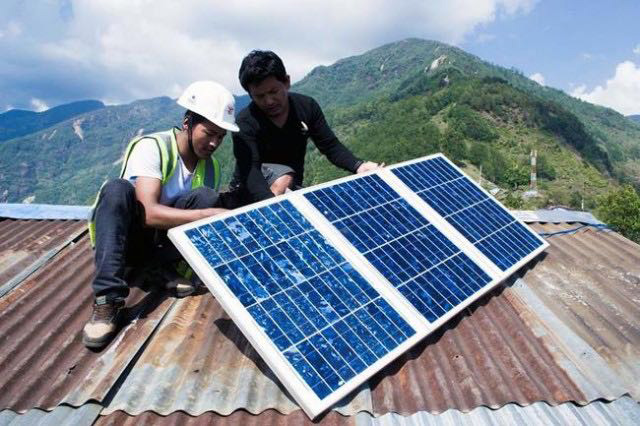 After Nepal is dithery on power sources and depending on the sun and full-moon to light up houses, the country is majorly facing scarce on national fuel reservoirs.  With growing political turbulence and dominant protestors, the country looms on economic revamp.

The country has a well economic dropout the easy and viable option for the majority seems to be solar.

A management consultant, Pankaj Shrestha has splurged on a set of solar panels for his home in Kathmandu on asked he said, “First there was no cooking gas available, so we bought an electric cooker. But then there was no electricity, so how could we cook anything?”

With 3 hours of maximum power availability, the Himalayan nation’s solar industry is eyeing a boom in sales.

Although solar panels are unaffordable for millions of poor Nepalis, the industry is confident the crisis will spur the country’s frustrated middle-class to invest in the renewable energy. ”We have already seen a 10 per cent increase each year in the number of houses using solar energy,” said Ram Prasad Dhital, chief of the state-run Alternative Energy Promotion Centre. ”But as interest develops in urban areas after the fuel crisis, we expect (the industry) to grow exponentially in coming years,” said Dhital, describing solar as “the ideal option” for many in the power-starved country. Landlocked Nepal has historically relied on neighbouring India for petrol, diesel and cooking gas, but these and other critical supplies have slowed to a trickle since a border blockade kicked off more than four months ago.

NGOs and the government have subsidised sales of solar panels to more than 750,000 homes in need.

The crisis is well articulated as the recent Kathmandu trade fair on clean energy sold solar systems surpassed USD 18 million during the three-day event, with representatives of about 90 companies struggling to keep up with demand, organisers said.

Nepal receives more than 300 days of sunlight a year, more than Germany, the world leader in solar power, making it an ideal hotspot to harness renewable energy. This can be a new inception for the solar sector into the Himalayan nation.