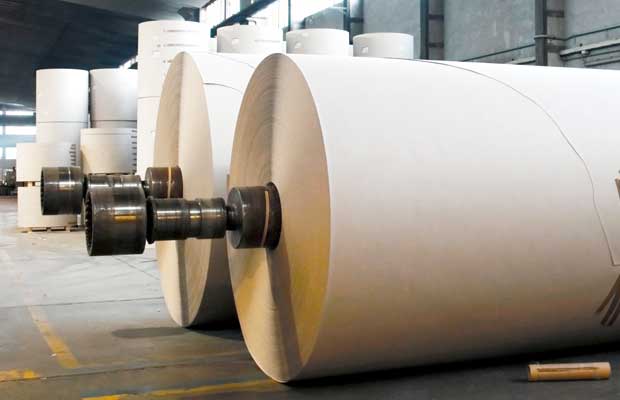 The paper industry in India has become more promising as the domestic demand is on the rise. Increasing population and literacy rate, growth in GDP, improvement in manufacturing sector and lifestyle of individuals are expected to account for the growth in the paper industry of India. Notwithstanding, paper sector is one of the most energy-critical and highly polluting sectors. Hence it pulls an extensive dis-cussion on the implementation of green technology to plummet carbon emission. The major share of energy which is needed in industrial production processes is below 250°C which could be easily supplied by Concentrated Solar Thermal (CST) tech-nologies.

At present fuel mix in paper industry in India comprises mainly of coal, petroleum fuels, biomass and electricity with the first two providing more than 68 percent of the total final energy consumption. It is desirable to reduce fossil fuel consumption while meeting the increasing energy demand of paper industry. This may have the twin benefits of reduced consumption of fossil fuels and lowering of greenhouse gas emissions. A reduction in the consumption of fossil fuels in the paper industry in India can be achieved by (i) improving the efficiency of fuel utilization and (ii) substitution of fossil fuel by harnessing renewable sources of energy area in suitable processes and end use. While energy efficiency improvements are necessary and would provide substantial benefits in the short run, harnessing of renewable energy sources to meet the energy demand of paper industry can pro-vide multiple benefits for the Indian economy for the long term. Paper industry primarily consumes energy in two forms-electrical and thermal. A major fraction (75%) of energy used in paper production is essentially for process heating at low and intermediate temperatures (50-2500 C). In a typical paper mill, processes such as pulping, drying, bleaching and washing (using hot water), boiler feed water heating etc. require most of the process heat. This heat is transferred through a heat transfer medium that could be water, steam, air or thermic oil based on specific process requirements. With the use of state of the art technologies, solar energy can be effi-ciently harnessed to provide heat at required temperatures (below 2500C) with or without integration with conventional fossil fuel based process heating systems.

The Booming Paper Industry in India

BILT and ITC are among the largest pro-ducers of paper and paperboard in India. Many of the existing players are increasing their capacity to meet the growing demand. The focus of paper industry is now shifting towards more eco-friendly products and technology. Government of India has esta-blished rules and regulations to control the population and degradation of forest. These measures taken by the government has brought the significant changes in the paper industry of India. According to “India Paper Industry Forecast & Opportunities, 2017” the paper industry in India is expected to grow at the CAGR of around 9.6% during 2012-2017, which will make the revenues of paper industry of India to reach up to USD 11.83 Billion by 2017. About 70% of the total installed capacity of paper production in India is accounted by Gujarat, West Bengal, Orissa, Andhra Pradesh, Karnataka and Maharashtra. Uttar Pradesh, Tamil Nadu, Haryana, Kerala, Bihar and Assam together account for about 25% of the total paper production in India.

Ashish K. Sharmaa, Chandan Sharmaa, Subhash C. Mullicka and Tara C. Kandpala presented details of paper production and thermal energy requirement in paper mills located in different States of India, the details are presented in table below. The annual thermal energy requirement of paper production in these mills is estimated at 56 PJ. Annual average DNI availability as estimated from the procedure is also given in Table. 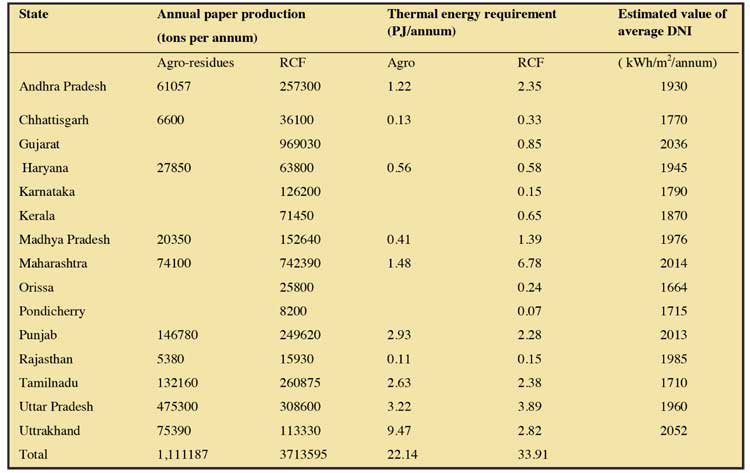 In the states with annual average DNI ava-ilability of more than 1900 kWh/m2/annum or more, the agro residues and recycled fiber based paper mills produce 3.86 million tons of paper and the corresponding thermal energy requirement for process heating is estimated at 43 PJ. It is worth mentioning that a major share of paper mill clusters in India that use agro residues and recycled fibers as raw feedstock are located in the states with adequate DNI availability (1900kWh/m2).

Use of Solar in the Industry

The following are the processes involved in the Paper & Pulp industry that require heat energy to generate steam and heating water where we can use concentrated solar power technologies for meeting demand of heat energy:

Paper industry is one of the most energy intensive and highly polluting sectors and is therefore of particular interest in the context of both local and global environmental discussions. The major share of energy, which is needed in industrial production processes is below 250°C – a temperature level, which could be well supplied by solar thermal technologies.

The process whereby timber is converted into paper involves six steps. The first four convert the logs into a mass of cellulose fibres with some residual lignin using a mixture of physical and chemical processes. This pulp is then bleached to remove the remaining lignin and finally spread out into smooth, pressed sheets (often with chemicals added to provide particular properties such as color or water resistance). The last step is Paper making which consists of preparation, forming, pressing and drying of the paper. The operations of pulp making, pulp processing and paper making require large amount of thermal energy in the form of hot water (60 °C) or low pressure steam (up to 150°C). This requirement of the thermal energy can be easily fulfilled by the solar thermal systems. Along with the man-ufacturing process, the plant requires lot of energy for utilities and waste treatment plants. The major energy requirement is for the water treatment and steam and power generation and effluent treatment. The following figure depicts the schematic of the paper and pulp manufacturing plant.

There is a vast potential for use of solar energy devices / systems in industries for process heat and other thermal applications. Presently, energy for these applications is being met mainly through fuel oil which is not only import dependent but is also creating huge GHG emissions in atmosphere resulting threat to our planet. India is consuming over 100 million tonnes of oil every year for various uses. Out of this, almost 40% is being consumed in the industrial sector alone. Further, 40-50% of this consumption is in thermal form alone with temperature range below 250 C which comes to around 15 million tonnes of fuel oil per annum. The applications include craft pulping, bleaching and drying in pulp and paper industry and various such applications.

There are number of solar energy technol-ogies which can be used for such app-lications and reduce consumption of fuel oil mainly during day time. The technologies include solar water heating systems, steam generating systems and air heating systems based on flat plate or evacuated tube coll-ectors and automatically tracked solar concentrating collectors.

Solar Water Heating is a well established technology and is in promotion worldwide. It can be used in industries for boiler feed applications in raising water temperature from 25 to 80 C and thereby saving a substantial amount of fuel oil being used in boilers. A 10,000 liters per day capacity system may cost between Rs. 15-18 lakhs and can save around 14,000 liters of fuel oil per year for a period of about 20 years, the life of the system. Also, Solar Air Heating Systems based on flat plate collectors have been found to be useful in Paper & Pulp industry. The systems installed in industries for drying of various products have been saving a significant amount of fossil fuel, apart from improving the quality of end product and reducing GHG emissions.

There is no doubt that the sun is able to generate huge amount of energy and it is used not only to power homes and app-liances but the paper industry too is making good use of it. Certain operations in pulp and paper industry have unusual demand when it comes to power supply. So there are many paper mills in India that are now supplementing their operations by using solar energy. There is no doubt that this form of energy is a cost cutter and helps to save the other sources of energy from running out. The paper mill owners will no longer have to depend on the other sources of energy.