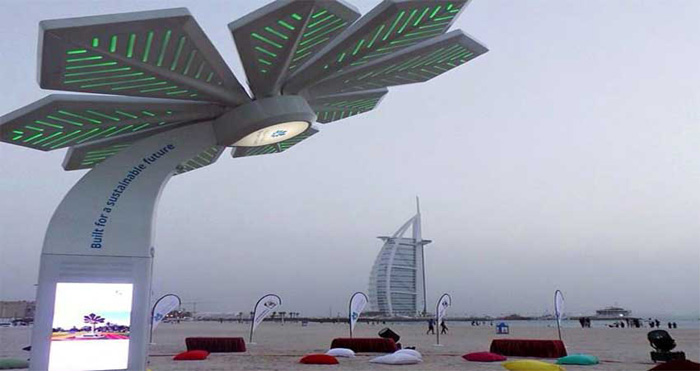 Dubai, the most populous and grandeur city in UAE has been catching light with its huge infrastructures. But, with growing urbanisation the city seems to have alarmed the need of ‘Green Technology’.

To make the city greener Dubai based Gadget Company D-Idea has decided to germinate different variety of Palm Trees around the city known as Smart Palm Tree.

It’s smart because the trees won’t just render date fruits, the leaves of the tree are technology advanced which is known to generate solar energy to permit individuals to gaze city information, data’s, access Wi-Fi, charging mobile phones and other small e-devices for free of cost.

Two archetypes palms have already been installed for trial – one at the Shoreline close to the Burj Al Arab Hotel and other at Zabeel Park.

Each of the Smart Palm convey Wi-Fi hotspot, 8 nos. of charging unit for mobile phones, tablets or other small e-devices and a touch-screen display for delivering data’s like weather/climates and transportation.

Finished with 9 nos. of leaf-structure PV modules, a six-meter-tall Smart Palm Tree can create around 7.2 KW/Hrs. for every day, enough to engage without ever drawing off the grid.

Dubai based Company; D-Idea who is behind the Smart Palm solar device says connectivity is just the start of the Smart Palm’s potential.

The company, D Idea plans to install 103 nos. of Smart Palm devices. The next upcoming model of Smart Palm will be created by 3d Printer and have a unique design. Produced using a mix of fibre-fortified plastic and concrete, the new Smart Palms will likewise is better ready to defy Dubai’s tropical desert atmosphere.

“The gadget won’t just look alluring, yet would counter the amazing climate conditions,” Nalepa said. He would not say how much the palms cost, but rather said the organization arrangements to swing to promoting and marking to meet future costs, he added.