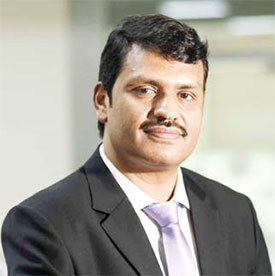 The world we live in is adaptive to technological advancements and energy is no exception. With the world moving towards non-polluting sources, renewable energy sources and especially solar PV (due to its widespread adaptability) shall play a major role in such transformation. Earlier, solar PV technology was only limited to space applications because of its low energy to weight ratio and cost. However, increased interestandtechnological exploration has seen solar PV flourish.

However, it was only in the early 21th century that the world started realizing the true potential of solar PV. From then, the market for solar energy has been growing exponentially thanks to the extensive support from the government coupled with the energy costs from solar PV breaching grid parity.

The solar module (see Figure 1) constitutes more than 50% of the plant’s cost, and is rightfully known as the heart of a solar plant. While the traditionally available solar modules in the market are multi & mono crystalline and thin film based, a lot of cell technologies (such as PERC, Bifacial, N-type cells, etc.) 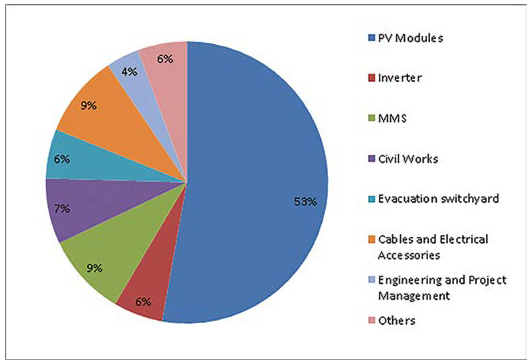 are already available in the market today after being lab tested for reliablility. With so much variety available, it can be a challenge for aninvestor to select the right technology. In a changing market, it is also critical to pick the right technology for a power plant considering various factors. This article aims to educate its readers on such technologies and also give them insights on them.

Traditionally, solar modules were more broadly classified into crystalline and thin film technologies. We will limit our discussion only to crystalline technology because of its huge market share and ease of availability. The history of solar cell dates back to 1954 where a first n-type cell was manufactured. However owing to space based applications p-type solar cell which showed less degradation to exposure of cosmic rays compared to n-type cell was adopted in the market. The main difference between p-type and n-type solar cells is the number of electrons. A p-type cell usually dopes its silicon wafer with boron, which has one less electron than silicon (making the cell positively charged).

An n-type cell is doped with phosphorus, which has one more electron than silicon (making the cell negatively charged). P-type cell due to its wide spread adaptation had gained significant advantage of economies of scale. This is because the entire value chain right from sand to solar cell is optimized as per p-type solar cell. However p-type cells are susceptible to light induced degradation (LID) and Light and Elevated Temperature Induced Degradation (LeTID). The n-type cells on the other hand are understood to be completely free from both LID and LeTID. In addition to this, n type solar cells are known to be more efficient compared to its counterpart. While this may lower the overall cost of energy generated from such cells, but cost of alteration to process of manufacturing is still an impending concern.

The trade-off between efficiency and cost in the solar market is between mono and multi crystalline technology especially in the past few years. The cost of multi and mono crystalline solar cells are now almost comparable, which would have a tremendous impact on growth of mono crystalline market. However, with optimised manufacturing technique (passivated emitter and rear contact) (PERC) cell (refer Figure 2) have started dominating the PV market. The manufacturing requires just 2 additional steps (comparing to traditional cell) by which a 2% gain in efficiency could be realized. While PERC based cell are poised to be a new normal in solar market in the next decade, a similar trade-off between multi and mono PERC is expected. However one key concern still raising the eyebrows is the effect of LID &LeTID in p-type multi crystalline PERC cells which causes efficiency reduction of (approximately) 5%relative. 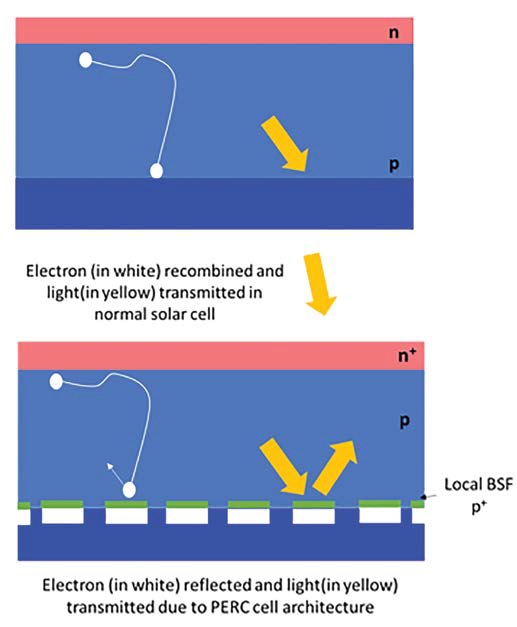 All the cells mentioned above generate power only from their front side i.e. the side which faces the sun directly. However in order to utilize the available space to the maximum, bifacial cellswere introduced. At cell level, bifacial technology sounds exciting as from the same available area enhanced power output could be obtained. The module made from such cells (refer Figure 2) need to be transparent on both the sides to allow the entrance of light.

While glass remains the choice of material for the front side, using either glass or transparent backsheet is an option for the rear side.

Using glass on the rear side enhances the overall mechanical strength of the module. It also almost nullifies the chances of water vapour transmission inside the module over longer period of time (>20 years).Bifacial modules when combined with trackers have been proven to provide exceptional generation. However such trackers demand the module to be framed which increases the weight of the module. The frameless module on the other hand are light in weight but they have a fair chance of cracking or being damaged if not handled/ installed properly. Also, due to glass-glass structure these types of modules are highly susceptible to PID if appropriate raw materialsare not used. The traditional transparent backsheet based option on the other hand is similar to manufacturing traditional solar PV modules. Lastly while the international market has started to adopt bifacial modules, a certification standard is still under development.

While the current article dealt with the cell technologies, the next part shall inform its readers on the variants available particularly in the module. Further it would also guide them on the parameters to be considered for selecting the right module technology. Keep looking this space for our next article. Let us all pledge to make solar energy the primary source of energy in the near future.