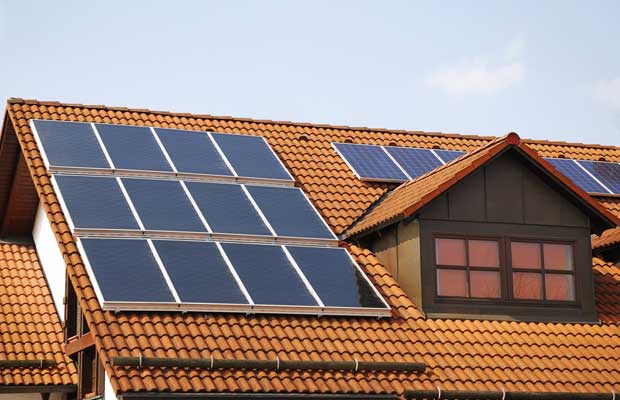 For the huge solar energy potential that remains untapped in India, a considerable amount constitutes of rooftops. With about 0.24bn households spread across the length and breadth of the country, there are enough roofs to generate 40 percent of the total solar generation target to be achieved by the government by 2022.

A Solar PV setup once installed could power a home for free after 7-10 years (maximum) of its break-even period. But it needs high initial capital costs, enough to overshadow its benefits and keep it off-reach to most house owners.

Loans and subsidies are the best way forward, adopted by governments to encourage and promote green energy. Especially for rooftop setups where the break-even period varies heavily from region to region due to high difference in the feed-in tariff provided by the DISCOMs.

Not only for households, sectors like agriculture if made gridindependent for their electricity needs can put a lot of debt off DISCOM’s shoulders and help create surplus grid power to ease off power companies and thier need for reckless use of resources to feed peak-power requirements. Subsidy – for rooftop – grid connected systems 30% – States and union territories 70% – Special states Subsidy – for solar plants 30% under Jawaharlal Nehru National Solar Mission.

What all parts come under the subsidy umbrella?

As per norms set by MNRE, there are select preset setup capacities against which you could avail the subsidy. The scheme was earlier implemented by IREDA through National Bank for Agriculture and Rural Development (NABARD) and more channels have been created for a faster disbursal of the subsidy amount.

As per the government, subsidy funds for grid connected rooftop systems, as updated in December 2015, has been scaled up from Rs. 600cr to Rs. 5000cr (50bn). Out of the total new amount Rs. 3250cr is to be used from 2017-2020 while the rest is being utilized since the new budget was approved by the cabinet committee on economic affairs.

In urban and rural areas alike, the subsidy amount is limited to 30% of the project cost as benchmarked by MNRE for various capacities of setup. Restricted to residential, government, social and institutional segments only, it will help achieve the 40GWp power target set for rooftop installations to be achieved by 2022.

But the subsidy amount in special category states has been kept at 70% of the project cost. The regions include Jammu and Kashmir, Lakshwadweep and Andaman and Nicobar Islands, hill states Uttarakhand and Himachal Pradesh, and all the North Eastern states including Sikkim which either have a very irregular supply of electricity or don’t have it at all due to geographical challenges.

There are specifics to be followed for the project to be eligible for subsidy. If the cost of the unit is less than or equal to the benchmark cost of the project capacity, full subsidy, i.e. 30% of the amount can be claimed. For example the benchmark cost of a 50 Watt (peak) panel is Rs. 13,500 and Rs. 4,050 is the maximum subsidy that can be claimed
on the installation.

The least cost (or a reduced cost in future) of the approved models would be taken as benchmark costs.

Pertaining to specifics laid down for solar lighting and small capacity PV systems, a solar setup could be financed under the NABARD scheme of capital subsidies that cover 40% of the system cost. But it was taken out of service in 2015. But similar schemes are being offered by respective state governments.

Individuals/companies can apply for setup loans. The extent of the loan isn’t fixed but the bank would only exclude a part of the project cost, considering technical feasibility and financial viability. Delhi government made it mandatory for public institutions and offices to use solar power, while incentives and tax benefits are available throughout the country for industries and company premises.

Subsidy for a solar setup can be applied for using three key channels. It can be either applied under a scheme run by state government or approved from MNRE. Subsidy provided by the state government varies heavily from state to state, but are one of the easiest to get, majorly because the information for the same is readily spread in local language and by word of mouth. Information about the subsidy and the process to get one could be a deciding factor in adopting solar.

MNRE certified installers are playing a vital role in adding to the rooftop generation capacity. The task of selecting eligible equipment, applying for netmetering and subsidy apart from setting up the generation unit with compliance is all undertaken by Surya Mitra installers. Another important mode for subsidy disbursement is through financial institutions. MNRE has approved State Bank of India and several other nationalized banks to offer loan for installation of grid connected rooftop PV along with the applicable subsidy and directed them to encourage people “to install rooftop solar PVs and include the cost of such equipment in their home loan proposals just like non solar lighting, wiring and other such fittings”

Subsidy to manufacture in India

There are a lot of attractive subsidy options to manufacture solar setup equipment in India. Though a panel is an integral part of a system, it is not the only thing that runs the system and there are many other important components required for proper and efficient functioning. Falling panel prices and limited R&D output should not put India on the back-foot of solar manufacturing. The two government schemes explained below are a great encouragement for manufacturers to kick start production for ever growing need for solar system components.

The Modified Special Incentive Package Scheme or M-SIPS was designed to attract investment in the electronics manufacturing industry.

Under the MSIPS scheme, a capital subsidy of up to 25 per cent for setting up new or extended project facility is provided by the government. The investment cost could be anywhere between Rs 1 Crore to Rs 5000 Crore. Incentives are applicable to 29 different verticals across the electronics industry, which also includes solar equipment like inverters, DC converters, IECs among others.

The Government of India announced concept of Special Economic Zones (SEZs) back in year 2000 to provide hassle-free environment and promote production and export to manufacturing setup of standard and scale of international levels. They are formed like a different country within the country, exempt from rules and regulations governing import and export, and from tax levies, duties, foreign investment and other transactions.

Various states, realizing the potential of SEZs have facilitated and expedited the processing of setting up of such units since then.