An alternative approach that has seen steep progress and adoption by industry is “passivated contacts.” In one form of this approach, a thin tunnel oxide with a poly silicon layer is used as the passivation and contact layer whereby direct metal contact to the crystalline silicon substrate can be largely avoided.

This approach also has the benefit of being able to withstand high temperature processing steps including firing for contact formation, which is most common in the current PV industry. Passivating contacts (more widely known as TOPCon) can be used to improve efficiency in both n-type and p-type solar cells. 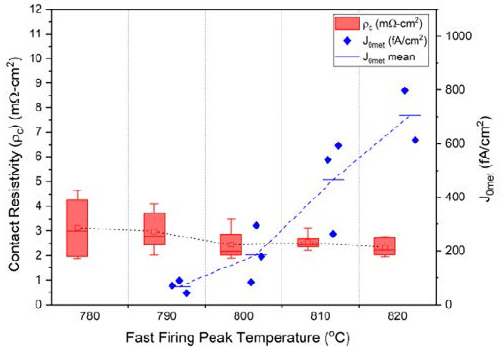 Significant improvements in metallization pastes have enabled the use of screen printing and firing to contact Poly-Si layers while preserving the passivation properties of this layer and inducing only very small recombination losses from metallization. J0,met of <100 fA/cm2 using Heraeus pastes have been reported by A. Chaudhary [1] on 150nm poly-Si layers. In this paper, the effect of firing temperature on J0,met was studied and analyzed using SEM imaging. They have reported that as the peak firing temperature is reduced, the J0,met reduces quite significantly as shown in fig 1 and a value of ~69 fA/cm2 was measured with respectable contact resistivity.

SEM images in fig 2 reveal that as the firing temperature is reduced, the amount of poly Si etched by the screen printed paste is drastically reduced, which could be one of the reasons for the reduced J0,met at lower firing temperatures. 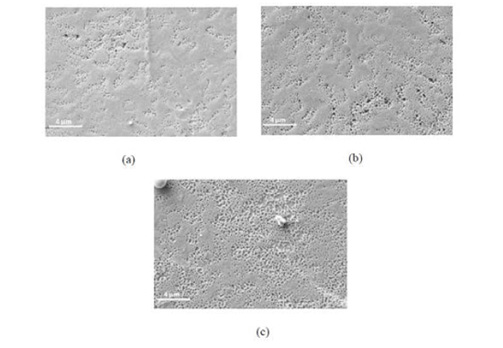 This study clearly demonstrates the importance of lower firing temperatures to reduce the J0,met and achieve the highest possible Voc from poly-Si passivating contacts. In an n-type cell where n+ poly Si is used in the rear side of the solar cell, in order to achieve the full benefit in a finished solar cell device, the front side metallization paste used to contact the Boron emitter also needs to be able to perform optimally at the lower firing temperatures. 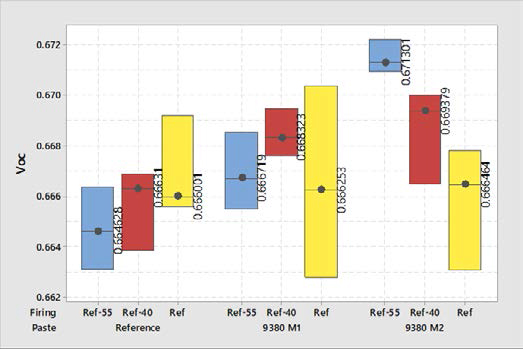 For 9380M2 paste, the Voc continues to increase as a function of lower firing temperatures. With this paste, Voc is improved by 5mV at Ref-55 ˚C.

In order for the cell performance to improve, we must ensure that the improvement in Voc is not offset by a loss in other IV parameters, particularly FF. FF data for the three pastes as a function of firing temperature is shown in fig 4. The reference paste shows a small drop in FF at Ref-40˚C, but a significant drop in FF at even lower temperatures. 9380M2 has a trend of generally lower FF as the firing temperature is reduced, but the overall values for FF are still comparable to the Reference paste at it’s optimum firing condition.

On the other hand, 9380M1 shows an improvement in FF at Ref-40˚C firing temperature. Similar to the Voc trend, the FF also drops at even lower temperatures, closer to that at Reference firing condition.

In order to understand the source of FF differences, series resistance and pseudo-FF data for the pastes at different firing conditions were analyzed. As it can be seen in fig 5, series resistance increases for all pastes as the firing temperature is reduced. However, it is interesting to note that the pseudo FF 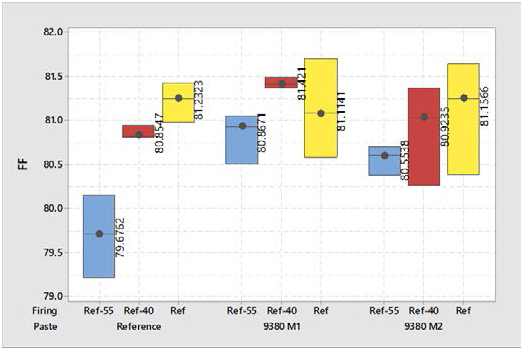 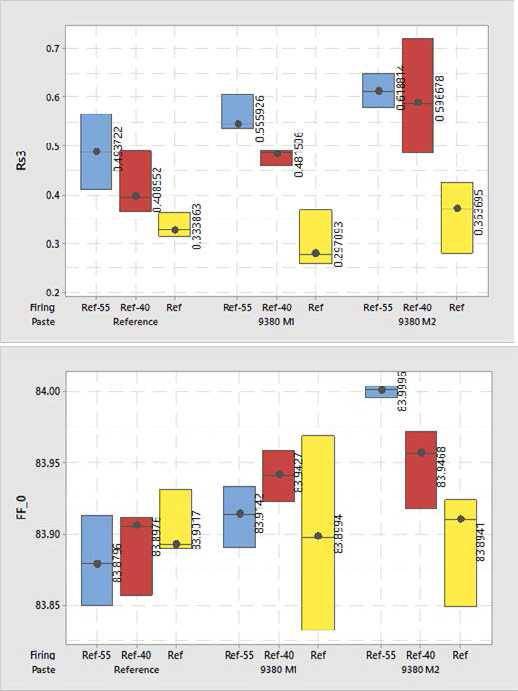 The trend of improving pseudo FF for the development pastes indicate that there is less damage induced by the pastes, which is also consistent with the improvement in Voc observed for these pastes at lower firing temperatures.

The net result of efficiency is shown in fig 6 for the pastes under study as a function of firing temperature. We can see that, as the Voc and FF are improved at Ref-40˚C for 9380M1, this results in a net improvement in efficiency, as expected. For 9380M2, while there is a loss in FF, the improvement in Voc is quite significant that there is still a net increase in efficiency, particularly at a firing temperature that’s even lower than the optimum temperature for 9380M1. For both developmental pastes 9380M1 and 9380M2, the improvement in efficiency is ~0.15%. These pastes not only enable lower temperature firing but also provide the ability to optimize the processing and firing conditions for the Boron emitter contacting paste (SOL9380) that are also suitable for the back side passivated contact (SOL7200) to achieve the highest efficiency. 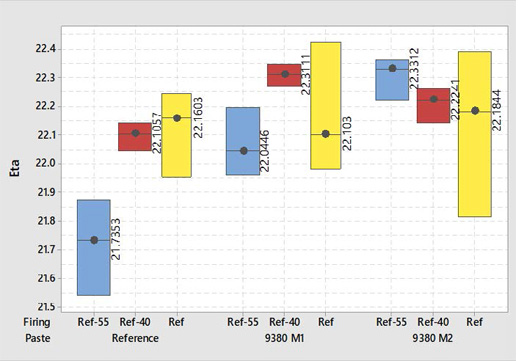