Photovoltaic (PV) module technologies are characterized according to Standard Test Conditions (STC) as per IEC 60904-3 1. This standard defines reference conditions at an irradiance level of 1000 W/m2 and an ambient temperature of 25 °C; less commonly known is that the standard also defines a spectral irradiance distribution characterized by ASTM G173 (shown in Figure 1). The G173 spectrum represents terrestrial solar irradiance at each wavelength under specified atmospheric conditions, as different atmospheric constituents absorb and/or reflect irradiance at particular wavelengths2. Just as module performance will vary from its characterization at STC due to field temperature and irradiance levels, module performance is also affected by the actual spectral irradiance distribution. The effect of spectrum on module performance is known as spectral shift, and this article will discuss the impact of this effect on various PV technologies. 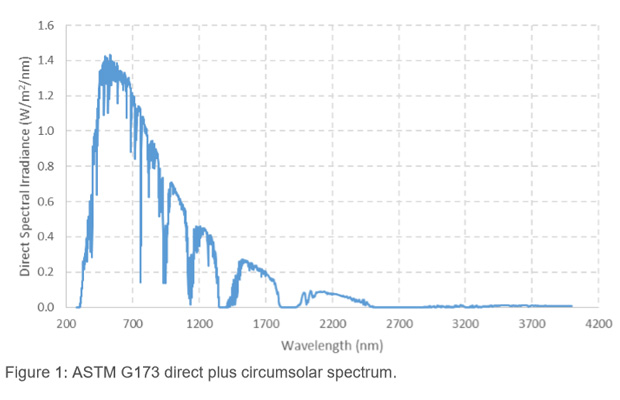 Why does spectral shift impact technologies differently?
The quantum efficiency (QE) of a photovoltaic device is defined as the ratio of electrons output from the cell to photons incident on the cell as a function of wavelength; effectively, this quantum efficiency curve (shown for several different technologies in Figure 2) describes a technology’s ability to convert particular wavelengths of incident irradiance into useful electricity. The width of this curve (i.e. which wavelengths are used by the device) is a function of the material’s bandgap. The height of the curve describes the cell’s efficiency at converting light to electricity at a particular wavelength, where a value of 1 indicates perfect conversion. 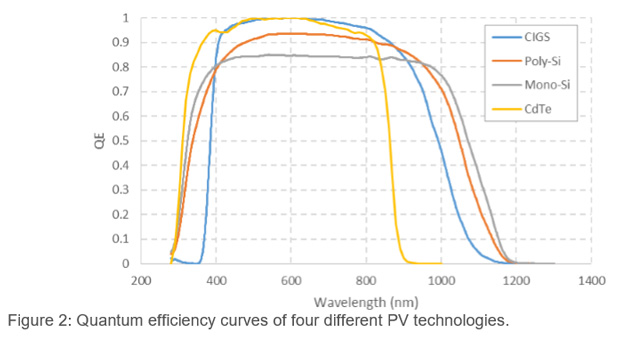 Irradiance is generally measured at a particular PV project location using a broadband pyranometer – where “broadband” refers to the fact that it is measuring a wide range of wavelengths, typically between 250 and 2800 nm.  However, this measurement does not specify the spectral distribution by wavelength, which would indicate how much of the broadband measurement is at wavelengths encompassed by the device’s QE curve. Depending on the composition of the atmosphere, where components absorb or reflect certain wavelengths of light, this spectral difference from STC may cause proportionally more or less of the measured irradiance level to be at wavelengths that can be converted to electricity by the cell.

In practice, this means that two different PV module technologies mounted in the same location with the same nameplate power may have significantly different energy production based on the prevailing atmospheric conditions. For example, Figure 3 illustrates a case where the performance of two module technologies is simulated at STC. The standard G173 spectral irradiance curve is shown, with typical QE curves normalized to 1.0 for c-Si (orange) and CdTe (blue) plotted concurrently. For this example, we see irradiance measured by a broadband pyranometer at 1000 W/m2 and our two module technologies reading 100 W at their nameplate power for simple comparison. 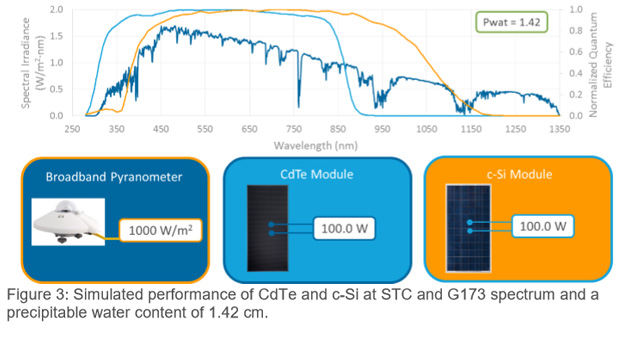 As we move to Figure 4, just one atmospheric component is changed: precipitable water, a measure of the amount of water in the atmosphere. As the precipitable water content changes from 1.42 cm at STC (Figure 3) to 4.5 cm (Figure 4), more irradiance at the wavelengths indicated by the light blue bands is absorbed by the atmospheric water. This causes the spectral distribution of the measured 1000 W/m2 irradiance measurement to shift towards shorter wavelengths, in turn causing proportionally more irradiance to be encompassed by the CdTe QE curve compared to the c-Si curve. As indicated by the power measurements, the CdTe produces more energy under these conditions at 104.7 W than the c-Si module at 101.2 W.

Has spectral shift been observed in the field and recognized by Independent third party laboratories? Spectral shift has been extensively studied by several researchers whose results have been published in scientific literature. These publications confirm that spectral shift has a significant impact on PV performance, highlighting the need for spectral corrections to be included in PV energy prediction models.

A review of the literature shows sensitivity of technologies to prevailing atmospheric conditions; in particular, several studies agree on the sensitivity of PV to precipitable water, with a more significant effect for CdTe3-6.More importantly, researchers have been able to move beyond modelling and laboratory testing and use outdoor studies to illustrate the effects of spectrum on PV performance. One such study was conducted by M. Schweiger and W. Hermann7 of TÜV Rheinland, who analyzed four different PV technologies in four outdoor test facilities in Cologne, Germany; Arizona, United States; Anacona, Italy; and Chennai, India. For the single junction modules, they measured spectral losses up to 1.6% and spectral gains of up to 5.3%. The largest spectral gains were for CdTe modules in Chennai, a location with high precipitable water content. The results of their study are included as Table 1.

Table 1: Spectral effects of c-Si, CIGS, CdTe and a-Si PV modules as measured by M. Schweiger and W. Hermann7
Two other studies8-9, analysed field performance data of CdTe and c-Si modules made publicly available by the United States National Renewable Energy Laboratory10, and found a significant correlation between module performance and spectral shift caused by precipitable water and air mass.The test locations were located in a variety of climates ranging from subtropical, to cold semi-arid, and cool summer Mediterranean.

How can spectral shift be determined? To determine the spectral irradiance distribution most accurately, it can be measured in the field using a spectroradiometer; however, this equipment is often prohibitively expensive. A reference cell or reference module can also be used to accurately determine the effective irradiance useful to the module, but generally energy predictions for project bids and energy guarantees rely on broadband irradiance measurements. As a result, several models have been proposed to try to characterize spectral shift using readily available atmospheric data.
Historically, the most commonly used spectral correction method was an air mass modifier proposed by Sandia National Labs11. However, this air mass function requires module testing outdoors under clear skies, and follow-up work has suggested that use of the air mass modifier yielded errors larger than when no corrections were applied, and that humidity may explain seasonal and geographic disparities in the modifier value12,13. Another approach was introduced by the CREST institute that uses air mass and a modified clearness index to capture the effect of cloudy conditions14. This method has been integrated into commonly used industry software PVsyst, but unfortunately published coefficients are only available for amorphous silicon and further field analysis has shown improvement compared to no spectral correction but relatively large error13.

The general consensus among researchers is that spectral shift is an important consideration when modelling the performance of a PV system, and there are many models that have been proposed to describe this behaviour. Models that consider air mass only have shown relatively poor performance, and the latest proposed models generally include both air mass and precipitable water with other possible factors. Currently, spectral corrections are only starting to be integrated into commonly used industry software. First Solar has proposed integrating monthly spectral shift values in with soiling inputs to capture these effects, allowing accurate predictions with use of industry accepted tools. Future updates will need to include these models to accurately describe PV performance in markets such as India, where high humidity and high ambient temperatures are directly correlated to spectrum-changing precipitable water. For example, Figure 5 illustrates the significant impact that spectral shift has on PV performance in India. On the left is the annual irradiance weighted spectral shift for First Solar Series 4-3 CdTe PV modules, and on the right is annual is the irradiance weighted spectral shift for a standard poly-Si PV module.

Conclusions:
Spectral shift due to prevailing atmospheric conditions may have a large impact on PV performance, particularly in humid climates such as India. Seasonal and short‐term weather related changes in solar spectrum cause a shift in the performance of CdTe PV systems as large as 6% from nameplate. There are a number of publications validating the effects of spectral shift on PV performance in the field and reaffirming the need for a spectral model for better energy predictions. Several models have been proposed, with common atmospheric considerations including air mass and precipitable water, but many commonly used software tools do not yet include spectral shift modelling capabilities. The inclusion of spectral variation into energy models has the potential to improve prediction accuracy which will lower the risk of projects failing performance commitments, and make projects more bankable and easier to finance.
References:
1 IEC 60904-3: Photovoltaic devices – Part 3: Measurement principles for terrestrial photovoltaic (PV) solar devices with reference spectral irradiance data, 2009.

5 B. Marion, “Influence of Atmospheric Variations on Photovoltaic Performance and Modeling Their Effects for Days with Clear Skies,” 38th IEEE Photovoltaic Specialists Conference (2012).

9 M. Mikofski, A. Oumbe, C. Li, B. Bourne, M. Anoma, and B. Meyers, “Evaluation and Correction of the Impact of the Spectral Variation of Irradiance on PV Performance,” 43rd IEEE Photovoltaic Specialists Conference (2016).