Home » Magazine Exclusive » Perovskite Solar Cells, Coming Soon To a Product Near You

Perovskites, named after Russian mineralogist Lev Perovski who discovered the base material over 170 years ago in the Ural Mountains of Russia are found abundantly in the earth’s mantle and sometimes, surface deposits even. They have now found an interesting and potentially breakthrough application in solar power generation technology. 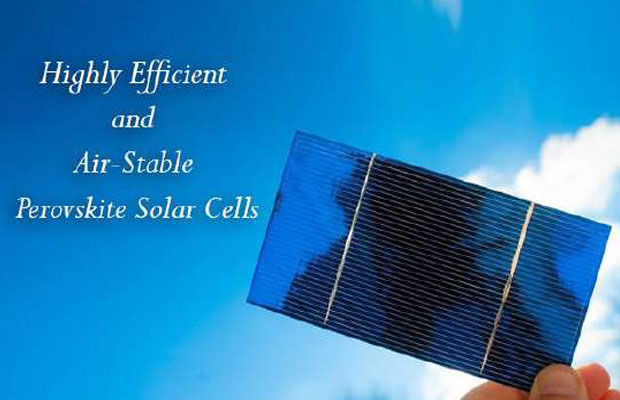 Different from the traditional silicon wafers that make up solar cells and panels of today – Perovskites have a unique crystallographic structure that makes them more effective at converting photons of light from the sun into usable electricity. Perovskites have generated excitement because solar cells that have a coating of Perovskite are delivering energy efficiencies of 25 percent and over in lab conditions, with just under 10 years of research in the sector. That’s a big jump over the 16 to 25 percent efficiency that is currently offered by the silicon-based models that are on the market currently and have over half a century of research behind them. More interestingly, due to their extremely thin nature, they open up applications across roofs, mobile phones, vehicles, and glass walls.

Perovskite solar cells are thus touted as the next big hope to increase efficiency and lower the cost of solar energy. Perovskite PVs indeed hold promise for high efficiencies, as well as low potential material & reduced processing costs. Perovskite PVs achieve their higher efficiencies by reacting to a much broader range of wavelengths of light, which lets them convert more of the sunlight that reaches them into electricity.

Moreover, they offer flexibility, semi-transparency, tailored form factors, light-weight and more. Naturally, electronics designers and researchers are certain that such characteristics will open up many more applications for solar cells.

All these research developments that made them a “potential” high efficiency, low-cost solar technology, finally have a real-world case. Actual mass production of Perovskite layered solar cells.

The firm claims that the factory will produce more than 200,000 square meters of Perovskite photovoltaic glass before the year-end. The announcement has been a bit of a surprise because until now, the mass production of Perovskite glass was considered another two years away, due to the early stages of commercialization compared with other mature solar technologies, besides other key concerns.

These included Overall cost as the product is still in the research phase and multiple components of the cells are expensive materials – For instance, the most common electrode material in perovskite solar cells is gold. Another drawback was that the cheaper perovskite solar cells have a short lifespan. Perovskite PVs also deteriorate rapidly in the presence of moisture and the decay products attack metal electrodes. Heavy encapsulation to protect perovskite can add to the cell cost and weight.

Scaling up is another issue – reported high-efficiency ratings have been achieved using small cells, which is great for lab testing, but too small to be used in an actual solar panel.

Another major issue is toxicity – a substance called (Lead Iodide) one of the breakdown products of perovskite. This is known to be toxic and there are concerns that it may be carcinogenic (although this is still an unproven point). And then there is the issue of using lead in many options, a massive pollutant.

In April this year, working with leading domestic solar companies, the National Renewable Energy Laboratory (NREL), the Washington Clean Energy Testbeds at the University of Washington, the University of North Carolina at Chapel Hill, and the University of Toledo had formed the U.S. Manufacturing of Advanced Perovskites Consortium (US-MAP), which is working to accelerate commercialisation of perovskite technologies.

For now, Microquanta is basking in the limelight, after stealing a march to mass production. “The wide use of perovskite photovoltaic cells will halve the cost of power generation,” said Yan Buyi, Vice President of Microquanta Semiconductor. The firm has also stated that the colour of the new material is also controllable, thus the photovoltaic power generation module can be tailored according to individual needs.

Earlier this month Microquanta had announced that it had passed IEC stability tests in 2019 for its Perovskite solar modules, the first time in the world. The firm claims that its 20 sq. cm. module had passed the 3000-hour damp heat test (3 times the IEC standards) without degradation of efficiency. The module also showed degradation of less than 2 percent after 100 kWh UV preconditioning test which was 6.5 times the standard. These results of rigorous and demanding tests demonstrate the market readiness of perovskite technology from Microquanta and a product lifetime of over 25 years.

The Microquanta product, if it achieves its promise and delivers on price, could open up a while new race for going solar by 2024, as production possibly ramps up elsewhere. That could have massive implications for the growth of solar, and the phase out of fossil fuels even faster.