The use of solar energy is mounting across the world, but the efficiency of silicon solar cells has made very little advancement in the last few decades. However, perovskite solar cell seems to be the answer to high-efficiency solar power. The rapid enhancement of Perovskite Solar Cells has made them the new star of PV industry and has taken the solar cell industry by storm with their ability to absorb light across almost all visible wavelengths, exceptional power conversion efficiencies and relatively easy process of fabrication. They are cheap, easy to produce and very flexible in their applications. Their efficiency at converting light into electricity has grown faster than that of any other material — from under four percent in 2009 to over 20 percent in 2017 — experts believe that perovskites could eventually outperform the most common solar cell material, silicon. Since their working methods are still at nascent stage, there is great chance for further research into the basic physics and chemistry around perovskites. 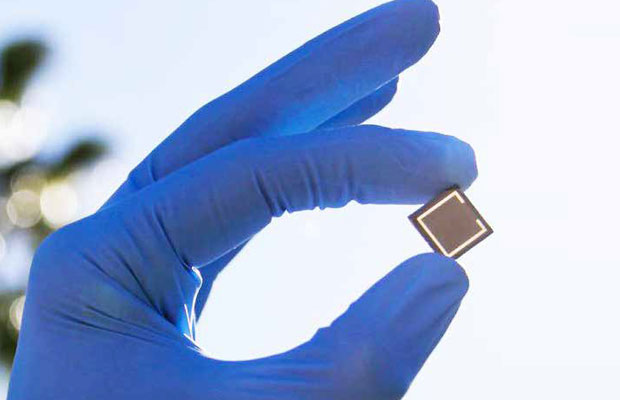 Perovskite solar cells are still facing several challenges, but much work is put into facing them and some companies are already talking about commercializing them in the near future. Usually solar cells are made of silicon with power conversion efficiencies that have been deteriorating in the low-20% range for about 10 years. A perovskite is a material that has the same crystal structure as the mineral calcium titanium oxide (also known as Perovskite). Generally, perovskite compounds have a chemical formula ABX3, in perovskites, the ‘A’ cation is much larger than the ‘B’ cation. Perovskite structures occur naturally as the minerals Perovskite, Loparite, and Bridgmanite. Perovskite are also predicted to play a role in next-gen electric vehicle batteries, sensors, lasers and much more.

A perovskite solar cell is a type of solar cell which includes a perovskite structured compound, most commonly a hybrid organic-inorganic lead or tin halide-based material, as the lightharvesting active layer. Perovskite materials such as methylammonium lead halides are cheap to produce and relatively simple to manufacture.

A Perovskite solar cell increases the efficiency and lowers the cost of solar energy. The 3rd gen solar cell indeed holds promise for high efficiencies, as well as low potential material and reduced processing costs. One of the biggest advantages of perovskite PVs over conventional solar technology is that they can react to various different wavelengths of light, which lets them convert more of the sunlight that reaches them into electricity. Additionally, they offer flexibility, semi-transparency, tailored form factors, light-weight and more. According to electronics designers and researchers, such characteristics will open up many more applications for solar cells.Kevin Tran, Stanford University notes that-perovskite solar cells have many distinct advantages over traditional silicon cells. Firstly, the fabrication of perovskite photovoltaics is much cheaper and simpler than silicon photovoltaics production. The wafer processing and cell fabrication associated with silicon require expensive equipments and facilities. In comparison, perovskite cell fabrication has been accomplished with simpler methods like solution spin coating. Additionally, perovskite cells have a higher band gap than traditional silicon or thin film cells. Therefore, they are transparent to typical solar absorption wavelengths and can be placed on top of lower band gap cells. This combined “tandem” photovoltaic system is able to absorb a greater part of the solar spectrum and achieves a higher efficiency than either type of cell individually.

In spite of the significant potentials, perovskite solar cell technology is still in the early stages of commercialization as compared to other solar technologies as there are a number of things that needs to be worked out before availability. One of the biggest problems is the cost of perovskite solar cells and another is that short lifespan. According to several reports the life of perovskite solar cells depreciates quickly in presence of moisture. Encapsulating this cell to protect them from moisture and decay can add to the cell cost and weight.

Scaling up is another issue – reported high efficiency ratings have been achieved using small cells, which is great for lab testing, but too small to be used in an actual solar panel.

Another major issue is toxicity – a substance called PbI is one of the breakdown products of perovskite. This is known to be toxic and there are concerns that it may be carcinogenic (although this is still an unproven point). Also, many perovskite cells use lead, a massive pollutant. Researchers are constantly seeking substitutions, and have already made working cells using tin instead. Kevin Tran notes that perovskite solar cells still face a number of challenges before they can be implemented on a widespread level, the efficiency of perovskite solar, though relatively high, is uncertain. To determine the efficiency of a solar cell, an I-V curve showing the current vs. the voltage is measured, and the point of maximum power is found. This power is compared to the incident light to determine the power conversion efficiency. In perovskite cells, however, the I-V curve changes depending on how quickly the voltage is varied and whether the voltage is scanned from high to low or low to high. Hence, the true performance of a perovskite photovoltaic in a long-term practical scenario is unclear.

Record In last few years the efficiency of the perovskite solar cell has increased to the point where its rivals are at the moment and looks like will overtake the efficiency of the conventional photovoltaic cell soon. However, the perovskite structure continues to experience stability issues, causing these cells to degrade quickly and shortening their lifespans. In order to help create better solar cells in the future, members of the Energy Materials and Surface Sciences Unit at the Okinawa Institute of Science and Technology Graduate University (OIST) have been investigating the cause of rapid degradation of these perovskite solar cells (PSCs) and have developed a potential solution to improving perovskite solar cell architecture. The new findings suggest that interactions between components of the solar cell itself are responsible for the rapid degradation of the device, and that interface engineering is important for the fabrication of highly stable and hysteresisfree perovskite solar cells.

The cell’s titanium oxide (TiO2) layer, which extracts electrons made available through solar energy, was found to cause unwanted deterioration of the neighboring perovskite layer. To achieve a high power conversion efficiency (PCE) and long lifetime simultaneously, an insulating polymer interface layer was deposited on top of the TiO2, preventing direct contact between the TiO2 and the perovskite layers. The polymer layer was insulating but very thin, letting the electron current tunnel through without diminishing the overall efficiency of the solar cell or the integrity of the perovskite structure.

Dr. Shenghao Wang, first author of the publication in Nature Energy, suggests that the degradation of MAPbI3 perovskites may not be a fixable issue. His research reveals that iodide-based perovskites will universally produce a gaseous form of iodine, I2, during operation, which in turn causes further degradation of perovskite. While many researchers have pointed to other sources, such as moisture, atmospheric oxygen and heat as the cause of MAPbI3 degradation, the fact that these solar cells continue to degrade even in the absence of these factors led Wang to believe that a property intrinsic to these PSCs was causing the breakdown of material.

“We found that these PSCs are self-exposed to I2 vapor at the onset of degradation, which led to accelerated decomposition of the MAPbI3 perovskite material into PbI2.” Wang explained, “Because of the relatively high vapor pressure of I2, it can quickly permeate the rest of the perovskite material causing damage of the whole PSC. This research does not rule out the probability of using perovskites in solar cells, however. Professor Yabing Qi, leader of the Energy Materials and Surface Sciences Unit and corresponding author of this work, expounds “our experimental results strongly suggest that it is necessary to develop new materials with a reduced concentration of iodine or a reinforced structure that can suppress iodine-induced degradation, in addition to desirable photovoltaic properties”.

Earlier this year in July, researchers at UNIST announced that hey has found key to produce a new cost-efficient way to produce inorganic-organic hybrid perovskite solar cells (PSCs) which sets a new world-record efficiency performance of 22.1 % in small cells and 19.7 percent in 1-square-centimeter cells.

This breakthrough came from a research conducted by Distinguished Professor Sang-Il Seok of Energy and Chemical Engineering at UNIST in collaboration with Professor Jun Hong Noh of Korea Research Institute of Chemical Technology and Professor Eun Kyu Kim of Hanyang University who both partook as co-authors of the study. A key feature of this technology is its ability to fix the dominating defect in perovskite-halides, which is known to decrease the photoelectric efficiency. Their results, published online in the June 30th issue of the journal Science, demonstrates that careful control of the growth conditions of perovskite layers with management of deficient halide anions is essential for realizing high-efficiency thin-film PSCs based on lead-halide-perovskite absorbers. “This study can improve the current record efficiency of perovskite solar cells from 20.1% to 22.1%,” said Professor Seok. “This will accelerate the commercialization of the low-cost, high-performance perovskite solar cells.”

In an another research, scientists at the University of Manchester recently demonstrated potential of the next generation solar cell technology by using insulating polystyrene microgel particles instead of costly polymers to make perovskite solar cells.

According to the research report, published by The Royal Society of Chemistry in the journal Nanoscale, showed that polystyrene particles enhanced stability and slashed the manufacturing costs of solar cells. As their power conversion is approaching parity with established solar PV technology, perovskite solar cells are becoming more commercially attractive. However, using organometallic halide perovskite as the light harvesting layer instead of silicon makes them vulnerable, as it quickly degrades when exposed to water. These cells also rely on a hole-transportation layer, which promote the efficient movement of electrical current when exposed to sunlight, but is very costly and unstable in the long run. In the research, the weak points have been addressed using insulating polystyrene microgel particles.

“The perovskite layer in solar cells is not inherently unstable, but the required holetransport material is. HTM layers made of congregated polymers are thin, but they are also relatively expensive and contribute a significant portion of the total cost of the solar cell. In this study we used polystyrene, which is 1/10,000th of the cost of polymers to produce, and is also hydrophobic which helps improve the stability of PSCs,” said Brian Saunders, Professor of Polymer and Colloid Chemistry from the school of Materials at The University of Manchester, noting that more research is required to enable the full potential of the existing PSC technology to be realized.

In last few years, perovskite solar cells have witnessed prodigious increase in efficiency which quite rare in PV technology. In the latest generation of solar cell technologies, perovskite photovoltaic seems to have the greatest potential to revolutionize the industry.