What happens to all the “green” infrastructure when it reaches the end of its life? The question is how will India dispose 100 gigawatt (GW) worth of solar panels in the next 20 years? While the production of solar energy is green, is there a well thought out and environment-friendly plan for end-of-life treatment of Solar PV panels and associated equipment? So, with exponentially ramping up of solar power generation, how would we address the prospect of used panels inundating landfills and leaching toxic waste into the environment? These are the most intriguing questions that require answers not just from the industry players but from the Government as well. 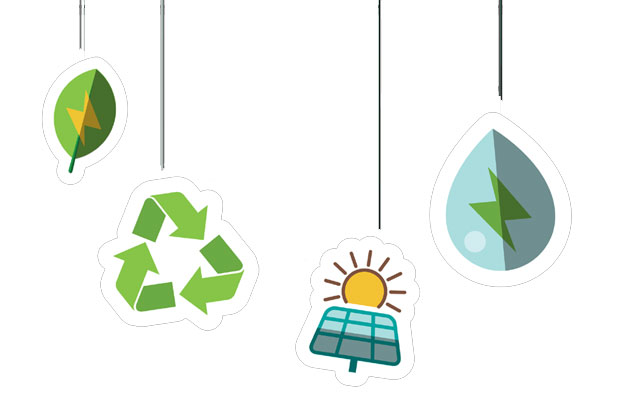 Disposal and recycling of photovoltaic (PV) modules are of key importance for a successful growth of environmental sustainability. Photovoltaic panels are designed to last more than 25 years, and many manufacturers back their products with performance guarantees backed by warranties.

The lifespan of a solar photovoltaic panel is approximately 20- 30 years, and hence the repercussions of waste from used PV modules are not glaring presently. When it comes to India, majority of the solar panels are less than 15 years old and this is why the knowledge of disposal of solar panels and the possible harmful effects caused by them to environment is not a serious concern right now. A significant increase in the amount of end-of-life PV modules is expected over the next few decades. Lack of awareness, technology, and poor infrastructure for PV cell recycling are major constraints for the solar panel recycling market. Why the issue is so important?

The same study projects India as the producer of over 78 million tonnes of solar e-waste by 2050. The report further highlighted cumulative PV waste generated in India was between 1000- 2500 metric tonne in 2016 which will probably rise to 50,000-320,000 metric tonne by 2030, and further culminating in 4.4-7.5 million metric tonne by 2050 as a result of country’s solar targets. Thus it’s imperative to manage the disposal of PV waste that is generated at the end-of-life of these PV solar modules.

In just about three decades, IRENA has estimated that global panel waste could be as high as 78 million tons. The US alone is expected to account for 10 million tons of retired panels.

A 2013 investigation by the Associated Press found that from 2007 to 2011, the manufacture of solar panels in California “produced 46.5 million pounds of sludge and contaminated water. Roughly 97 percent of it was taken to hazardous waste facilities throughout the state, but more than 1.4 million pounds were transported to nine other states.”

And if recycling processes were not put in place, there would be 60 million tons of PV panels waste lying in landfills by the year 2050; since all PV cells contain certain amount of toxic substances that would truly become a not-so-sustainable way of sourcing energy. Some solar panels also contain rare elements, such as gallium and indium. Their loss through indiscriminate solar panel disposal could result in permanent depletion of these substances in the future. Recycling these materials helps conserve the supplies of these finite resources.

The Ministry of Environment, Forest & Climate Change (MoEF&CC) have incorporated some clauses on waste handling under the E-Wastes (Management and Handling) Rules. In fact, solar PV tenders issued by NTPC and Solar Energy Corporation of India (SECI) place the end of-life responsibility on the Solar Power Developers ‘as prescribed under the E-Waste Management Rules.

However, it does not specifically mention about the issue of management of used components of solar power systems—it only addresses household electronics and not PV panels. According to the Ministry of New and Renewable Energy (MNRE), the responsibility of disposal of solar PV cells and modules rests with developers. In the guidelines issued for grid-connected solar power projects under Jawaharlal Nehru National Solar Mission (JNNSM) in 2010, there is a clause for disposal of solar panels.

It states that “the developers will ensure that all solar PV modules collected from their plant after their ‘end of life’ (when they become defective/non-operational/ non-repairable) are disposed off in accordance with the ‘e-waste (Management and Handling) Rules’ notified by the government and as revised and amended from time to time”. 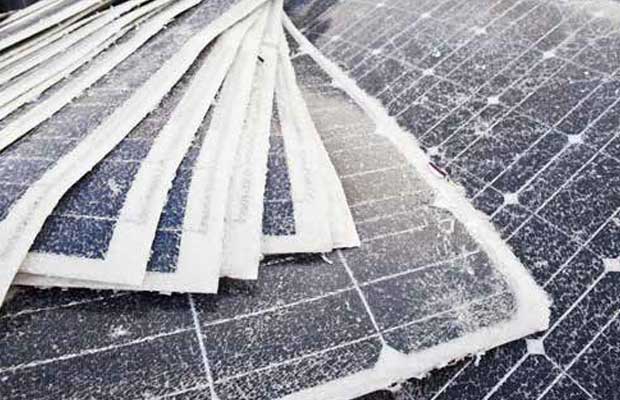 In the current scenario, it is mostly the unorganised waste collectors who are interested in aggregating e-waste, including panels and batteries. This can be gauged from the fact that, there were less than 200 recyclers and dismantlers of e-waste registered with the Central Pollution Control Board (CPCB) of India, by the end of 2016. \

The solar PV recycling industry is prevalent in western countries. The global solar panel recycling market will be worth over US$ 384 million by 2025, Grand View Research suggests.

The European Union has formulated guidelines around waste generated from solar panels. There is an international PV industry programme called “PV Cycle” that has been set up to address the recycling issue for solar power. As per the regulations, solar panel disposal falls under the European Union’s WEEE (Waste of Electrical and Electronic Equipment) directive and places the onus on the manufacturer to responsibly collect back the solar modules and dispose it. The solar panel recycling market in China is projected to reach a value of more than US$ 50 million by the end of 2024. China has also started the PV Recycling and Safety Disposal Research program, which is a part of its national high-tech R&D program. Furthermore, China is drafting stringent laws and regulations to tackle rising volumes of solar PV panel waste.

When it comes to US, no such universal regulation exists yet at the federal level, except for the minority of panels that fail the Toxicity Characteristic Leaching Procedure (TCLP test) and thus are subject to the Resource Conservation and Recovery Act (RCRA). In contrast, California has already enacted legislation governing solar panel disposal, and it’s likely that other states will follow suit in the future.

In December 2017, Japan acknowledged the repercussions that the decommissioned solar panels could cause. The Japan Photovoltaic Energy Association (JPEA) voluntarily issued guidelines, which are not enforceable yet strongly recommended to the industry, on ‘proper disposal’ of used solar modules.

Countries of the Middle East and Africa have also adopted the regulations for solar PV panels recycling and also started to implement robust methodologies to tackle solar PV waste volumes.

In the US, companies such as First Solar, Engie, Abound Solar and Suntech have stated that they design their panels with end-of-life in mind. First Solar claims its recycling recovers up to 90% of materials. The company boasts its state-of-the-art recycling facilities are operational in the U.S., Germany and Malaysia, with a scalable capacity to accommodate high volume recycling as more modules reach the end of their 25+ year life. First Solar further claims its proven recycling process achieves high recovery rates; up to 90 percent of the semiconductor material can be reused in new modules and 90 percent of the glass can be reused in new glass products.

Abound Solar has a “cradle-to-cradle” programme. They reclaim both tellurium and cadmium from its modules at end-of-life and reuse the materials. Over 90 percent of Abound Solar’s components are recycled. Suntech uses easy to recycle, non-resourceconstrained materials to ensure that the materials at the end of life of the panels can also be recycled and reused.

What could to be done?

The first and foremost step government should take at this time is to set up mechanisms for solar waste management. And at the initial level, it must include solar PV panels in the existing e-waste management rules so as to regulate its recycling.

The three principles of waste management are the 3R—reduce, reuse and recycle. Since India announced an ambitious goal to increasing renewable power capacity to 175 gigawatts (GW) by 2022, with 100 GW of solar, so reducing e-waste is a limited option and this is why it becomes imperative focus on — reuse and recycle.

Given the rapid increase in production and installation of PV systems, recycling of PV modules is becoming more and more important. Recycling units will create additional employment opportunities PV panels will become double ‘green products’ by both serving as a source of renewable energy generation and being able to reused for the same or different purposes after their life cycle ends. 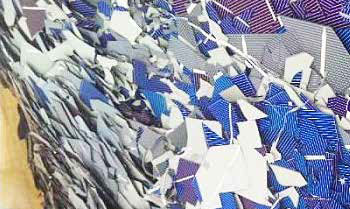 However, one major concern about solar panels is about the materials used in the solar panels which make recycling a challenge. According to a 2017 study conducted by a US-based research and policy organisation in the field of clean energy, it warns that toxic waste from used solar panels now poses a global environmental threat due to the use of heavy metals, including lead, chromium, and cadmium. It is high time India builds and adequately regulates the PV recycling industry because the components of solar modules is not all made of biodegradable materials.

Although solar energy is hailed as ‘green’, the manufacturing process associated with silicon based solar cells releases large amounts of pollutants, overshadowing the eco-friendly status of solar power. This is the reason why the producers/manufacturers must use greener and environmentally sustainable elements. In this regard, NTPC and SECI have initiated few steps towards making PV cleaner in India by opening up the technical requirement of PV backsheets allowing equally performing but more sustainable backsheets to be used in the solar PV panels.

The Energy and Resources Institute (Teri) think tank is also undertaking a long-term project for recycling of solar PV modules and battery technologies. As a first step, in the off-grid sector, manufacturers and retailers of off-grid products must be mandated to ensure inclusion of relevant text about safe disposal of panels.

When it comes to big-sized tenders, bidders must be mandated to submit proof of evidence for having trained manpower resources and adequate facilities for management of solar waste. In the off-grid areas, setting up institutional mechanisms for waste aggregation will prove to be useful. Not only will PV recycling create greener job opportunities but also approximately $13 billion in recoverable value by 2050. This huge influx will make it possible to produce 2 billion new panels without the need to invest in raw materials. This means that there will be the capacity of producing large amount of energy just from reusing previously used materials.

Prime Minister Narendra Modi in his address at the World Sustainability Summit in Delhi reiterated his call for zero environmental effect of technology deployment. This calls for a close look at the use of the right materials, efficient design and operations and robust recycling programmes.

Though the government has taken a great step towards green energy, it should not miss the opportunity to overshadow this serious issue as the problems owing to heaps of decommissioned panels may intensify only 5-10 years from now, it would be prudent to address the problem in its early stages rather than when we are already in the middle of it. The time has come to take the action now!