Solar installations in India have seen an average year-on-year growth of 82% since 2012. 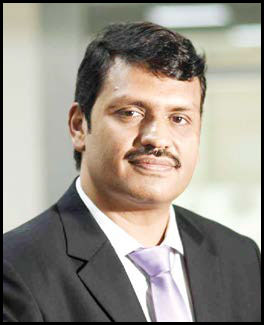 With India currently standing at around 28 GW of solar installation and with more than 95% installations utilizing crystalline technology, this trend is not to change in the next few years. To a novice, crystalline solar module comes in two technologies, i.e. mono crystalline & poly crystalline which could be easily identified by their shape and/or their colour. While such identification is relatively easy, selecting the right kind of technology for your project could be highly perplexing. This is primarily because of the advantages each technology has,be it the cost advantage of utilizing poly crystalline versus the efficiency advantage of mono crystalline technology. While there has been a lot of debate over this topic and with over hundreds of articles online, a perfect answer to this conundrum is still missing. Further, with the location and its climatic conditions having a subsequent affect over the plant’s performance, a clear guideline considering all the performing indicators in a power plant seem clearly lacking. My view hereis to educate readers on a complete technical and commercial evaluation of a mono crystalline versus poly crystalline module. The idea is also to enable the end customer/ investor/or an EPC to make correct decision when selecting a technology for their power plant.

Solar modules are known to have varied performance throughout the day due to varying weather conditions. Such variations throughout the year vary distinctively across countries. The performance of the solar modules thus differ accordingly which makes it important to have a complete study across each climatic zones. India,the 7th largest country in the World,houses almost all the type of climatic conditions which could be experienced and hence makes a perfect choice for the study.

Primarily, India can be divided into 6 climatic zones (refer Figure 1) as mentioned below: 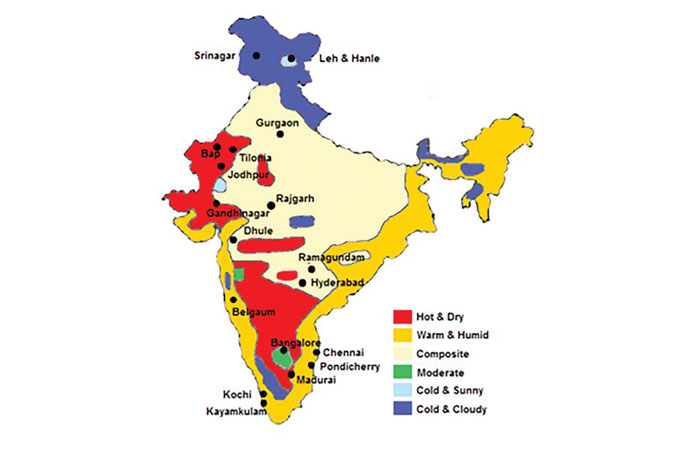 Designing a solar power plant is a tedious task given the fact that there are numerous calculations alongside various considerations to be made before arriving at a final blueprint. However, at initial stages, there could be two basic divisions in deciding on the design on the power plant:

a. Plant based on fixed area

b. Plant based on fixed capacity

Understanding and designing a power plant based on the above parameters enables a novice to perfectly evaluate its performance along with their commercial returns. In many of cases, where we have a fixed area chalked out for the solar PV plant, it needs to be ensured that the designer accommodates maximum capacity of PV plant to ensure theenhancementofthe plant’s commercial return.

There are however few cases where one need to have a power plant of fixed DC capacity, say due to limited evacuation capacity, policy or regulatory limitations and limitations due to tenders. In casessuch, it is of primeimportancethat the plant is designed in a way that its energy output is optimized to ensure enhanced commercial return.

For a thorough understanding, a single location was considered from each of this climatic zone with further the power plant consideration based on fixed area (1000 m2) and fixed capacity (1 MW). Theenergy gains, gains from temperature losses and commercial savings wereanalysed by utilizing mono crystalline versus poly crystalline technology. In order to understand the gains only from the module technology, the balance of system (BoS) for the entire study was kept same.

Found in the western and few central parts of India, hot and dry zone have summers with high to very high temperatures. This zone further also has moderate to extreme winters. The extreme temperatures directly affect the performance of the power plant. Specifically during summer, due to high ambient temperatures of around 42~46 °C, the operating temperatures of the solar module increases rapidly. Mono crystalline modules, which are known to perform better in higher temperatures, loses 4.95% less energy due to higher temperatures when compared to poly modules. Overall, an energy boost of around 18% in summer can be realized while utilizing mono technology. Performance Ratio (PR) of a mono based power plant is found to be 83.16%, which is 3.09% more than that of poly based plants. Energy injected into the grid by mono based plant is deemed to be 17.8% or 52 MWh higher (refer Figure 2) which directly enhances the plant’s financial returns. 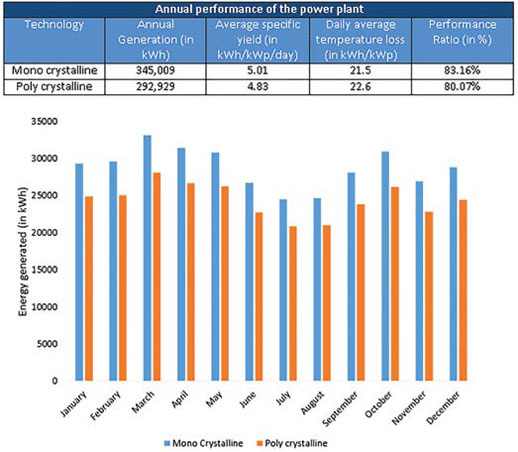 Firstly, a significant savings in energy loss due to temperature i.e. 1,030kWh/month (average) was realized when utilizing mono crystalline modules in power plant, with maximum difference to the tune of 1,331 units realized in summer season. Further, the PR for mono based power plant was found to be 81.70%, which is at an average 0.62% higher than poly based power plant. 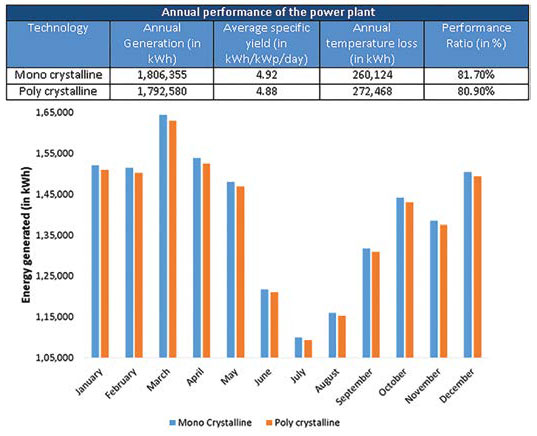 Found mostly in coastal areas of India, this zone is mostly recognized by its humid climatic conditions around the year. Further, they may experience summers with temperatures ranging from 35~42 °C coupled with moderate winters.

Accounting to mostly moderate to sometimes high temperatures around the year, the power plant utilizing mono modules are expected to save 0.84 kWh/kWp/day attributed to temperature losses. Compared to summer, the winter experiences 5.10 % gain in the PR, thanks to the clear skies. Further, mono crystalline based power plants experience a gain of 2.95% over the plants utilizing poly crystalline modules.

Additionally, it is expected that utilizing mono technology shall enhance the output of power plant by 0.16 kWh/kWp/day. This gain when considered for power plant based on fixed area would result in45.5 MWh more (refer Figure 4) energy generated from a mono crystalline module based plant. 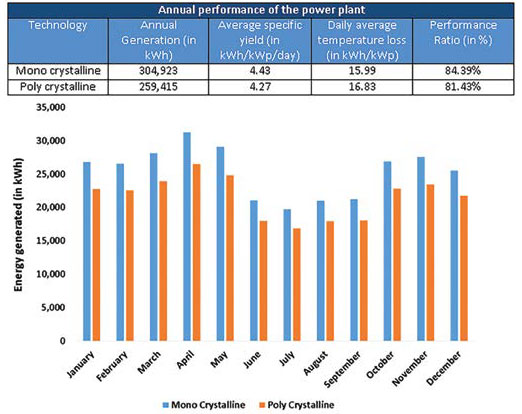 The warm & humid climatic zone, given its cloudy conditions around the monsoon experiences a significant reduction (~37%) in generationfrom solar PV. The generation however increases till April given the fact that there is an increase in irradiance in the region.

Further, with increase in temperatures the output of the PV plant reduces. The mono crystalline based power plant injects 10.3 MWh (or 7.67%) moreenergy into the grid per MW of power plant installed in such areas (refer Figure 5 for more details). This increase could be directly related to the savings obtained from temperature loss which stands at 9,254 kWh/year. Further a boost of 0.50% in PR is also realized by utilizing mono crystalline based modules. 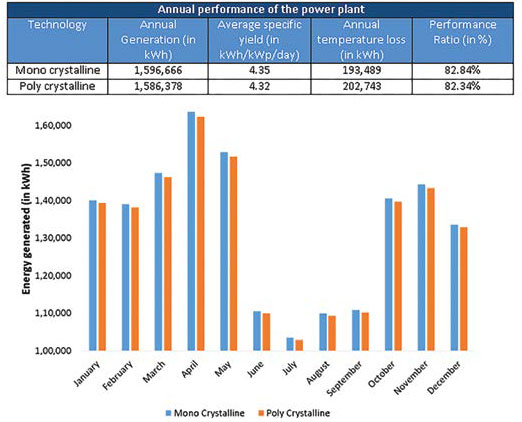 Moderate climates are known to be balanced throughout the year. Such climatic zones, other than its intensely cloudy monsoons are considered preferable conditions for a solar power plant.

When comparingpower plant in fixed area, we find that the average energy gain of mono over poly stands fairly constant throughout the year i.e. at 17.65%.

The performance of the overall power plant however is known to be much better when a plant usesmono crystalline module i.e. 50,621 units more (refer Figure 6).

Further the PR of the plant is known to be 3.03% more compared to a poly crystalline based plant. 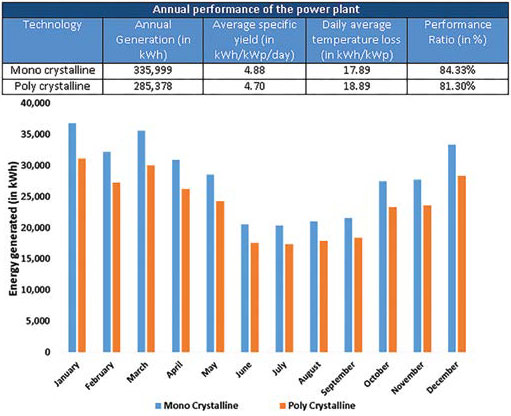 A power plant of fixed capacity in moderate zone is expected to perform best during winters due to lower temperatures. Over and above, a similar observation was made in the month of Marchwhere the zone observes high irradiance and coupled with moderate temperatures.

When comparing both the power plants, it was found that a mono based plant annually generates 13,826 units more. A boost in the PR of around 0.60% can be realized while utilizing mono crystalline modules. 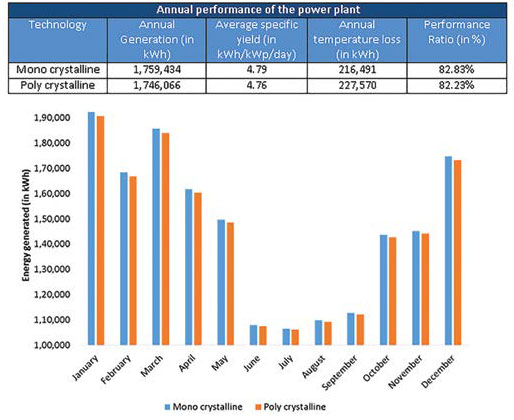 Found mostly in central India, places having composite climates constitute more than 30% in the country. This zone typically has the climatic combination of both hot & dry and moderate zone, i.e. it has extreme summers and extreme winters while the monsoon are typically coupled with cloud covers. Pertaining to such extremities, the temperature loss in a mono crystalline plant stays at 23.5 kWh/kWp which is 1.20 kWh/kWp less than that obtained in a poly crystalline based plant. In winters, such loss stays at 18.30 kWh/kWp in a mono crystalline plant, 1 kWh/kWp lower than that obtained in poly crystalline based plant. The PR for a mono crystalline plant is found to be 3.08% higher than that of a poly based plant. Further, the energy injected into the grid is deemed to be 48.5 MWh higher (Figure 8) than poly based power plant which directly affects the commercial returns from such plant. 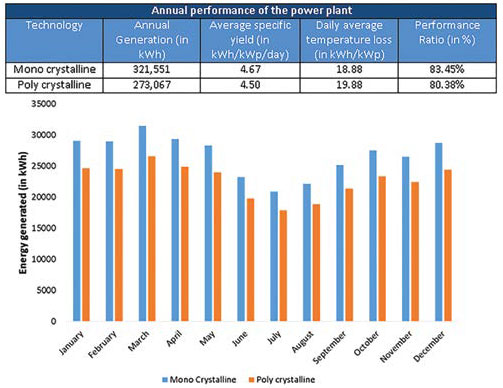 While the monsoons are coupled with cloud cover, they stay relatively short in this zone. The energy generation during monsoon is around 33% lower than that in winters. The annual energy generation when consideringmono crystalline technology stands at 1683 MWh which is 0.75% greater than that obtained from a poly based plant. 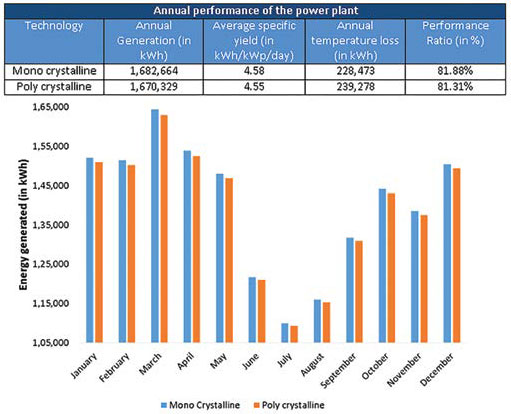 I hope this was useful.Let us all pledge to make solar energy the primary source of energy in the near future.