Mono vs Poly – A climatic study in cold zones

The first part of the article “Mono vs Poly – An introspective simulation study” introduced the types of crystalline technology, the need for this study, the methodology we followed and detailed discussion of 4 climatic zones.

This part would educate the readers on the results of the remaining two climactic zones.

Further, it would also present a financial analysis of both the plants and the conclusions from the study. 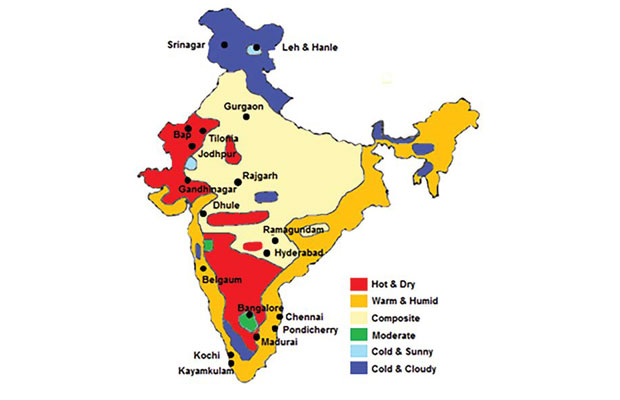 Power plant based on fixed area

The climatic zones discussed in our previous article i.e. hot & dry, warm & humid, composite & moderate were relatively warmer with moderate to heavy rains. Few zones had extreme weather conditions which resulted in higher generation during winters and lower generation in summers. The remaining two climatic zones which are discussed in this article are relatively cooler (throughout the year). Found mostly in Northern and few North-Eastern (refer Figure 1) regions of India, cold & cloudy climatic zone could be significantly identified by cool summers and extreme winters with a cloud cover throughout the year.

Despite such cool climate close to the ambient operating temperatures of solar module, mono crystalline technology is found to perform better under both fixed area and fixed power conditions. Considering the case of fixed area first, poly crystalline module loses 6.25 percent higher energy than the mono crystalline technology based power plants.Overall an energy boost of around 17.25 percent in summer can be realized while utilizing mono technology. Performance Ratio (PR) of a mono based power plant is found to 87.10 percent, which is 3.07 percent more than that of poly based plants. Energy injected into the grid by mono based plant is deemed to be 17.34 percent or 41.3 MWh higher (refer Figure 2) which directly enhances the plant’s financial returns. 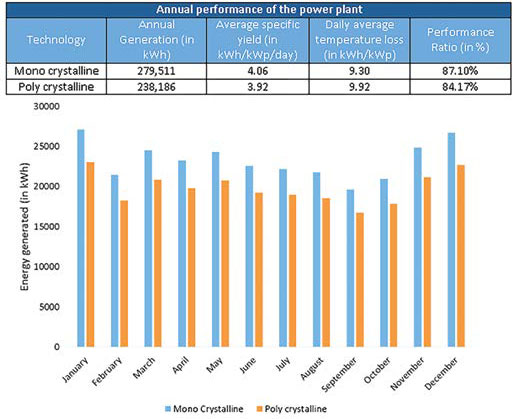 Power plant based on fixed capacity

Considering the case of a power plant under fixed area, a power plant in cold & cloudy zone is expected to perform best during winters owing to reduced temperatures. Both the power plant on an average generate from 14.59 to 14.70 percent more in winters compared to summers. However when comparing both the plants, it was found that mono based power plant annually generates 8.8 MWh more. Further an annual boost of 0.50 percent is realized while utilizing mono crystalline technology over poly crystalline technology. The difference in temperature losses follows a similar pattern to the generation curve i.e. the difference is lower during and around monsoon season (average of 519 units) and higher during other months (average of 628 units). A total savings in temperature losses of 7 MWh was realized in power plants utilizing mono crystalline modules (refer Figure 3). 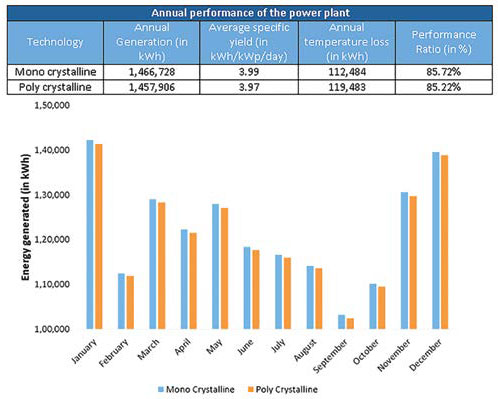 Power plant based on fixed area

Deemed to be the ideal region for installing a solar power plant, cold and sunny zone are found at specific location in Northern India (around Leh) & the Aravalli range in Western India. They are identified with pleasant summers and extreme winters with fairly clear sky throughout the year. While plants at other location performed better during winters, the plant installed at cold & sunny location was found to be maximum in summers and monsoons due to its clear weather. In winters however, the reduced irradiance coupled with the cloud in the region results in the drastic reduction in the energy output (as high as 32 percent). Comparing the results for fixed area, we find that the overall generation utilizing mono crystalline module is 48 MWh more than poly crystalline module. Further the temperature loss in a mono crystalline plant stays at 13.85 kWh/kWp, which is 0.79 kWh/kWp less compared to that in a poly crystalline based plant. The PR gain by utilizing mono crystalline module is 3.10 percent more than that of poly crystalline module. 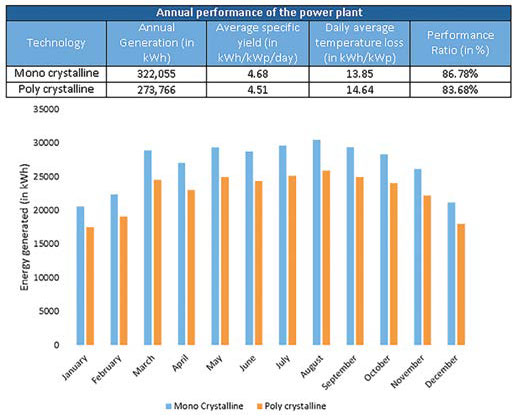 Power plant based on fixed capacity

Comparing the results of fixed power plant, the difference in the energy pushed to the grid by a mono based power plant is 0.57 percent or 9.8 MWh more than the poly crystalline plant. Further, an approximate of 8.32 percent in winters and an overall average of 5.86 percent of energy could be saved from temperature losses if mono crystalline modules are utilized. The power plant during summers experiences a boost in PR up to 0.52 percent while an overall boost of 0.45 percent is expected. Overall, a boost in specific energy yield of 0.03 kWp/kWh could be obtained by utilizing mono crystalline module. 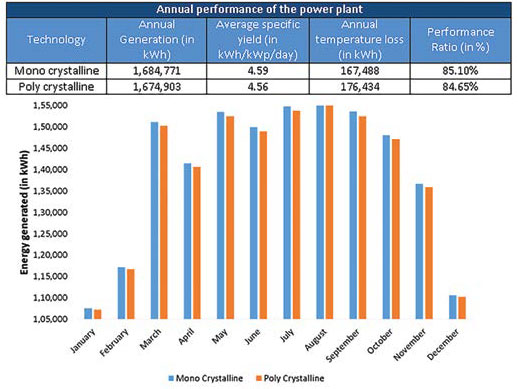 While, part 1 and part 2 covered the technical analysis of the study, the final part will explainthe financial aspect of the same.