In order to realize the module test on site at the highest technical level, MBJ and there worldwide partners need the right testing equipment. MBJ invented and consistently improved the Mobile PV Laboratory for the efficient on-site testing of solar modules, so that today it works on the technical level of conventional stationary laboratories. Test systems for recording EL images on installed modules achieve the highest image quality. All systems are developed within the MBJ Group and also produced in Germany. MBJ Services has developed a unique expertise in the production of test equipment for on-site use within the last 5 years.

Picture of the Mobile Lab

ON SITE TESTING WITH MOBILE LAB AND MOBILE EL

MBJ Services GmbH was commissioned for the post shipment and post installation inspection of polycristalline modules from the type MBJ12P-325 and MBJ12P-330 in the MBJ Test Site. From each of the 137 delivered containers one pallet was chosen and 10 modules out of each of the 137 boxes was tested. Always the first (M1), the last (M10) and nine modules out of the middle (M2 – M9).

MBJ tested in total then 1370 modules in 6 working days with the Mobile Lab. The first 580 lab tested modules of the 325 W class were directly installed very carefully from a dedicated mounting team. These modules were tested afterwards in-situ at night with the Mobile EL to compare the module quality from after delivery to after mounting. There was 220 in situ tested modules in addition, which were not checked with the lab before. The original idea of testing panels been installed during normal installation and check them randomly was not doable, because the normal installation of the site had not been started at that time the on-site module testing was performed. Therefore, the team doing the installation of panels to be tested was a dedicated installation team selected by the EPC.

For reasons of controlling 10 modules out of the 325 W class was selected on site and send to the stationary lab of the TÜV Rheinland to reconfirm/check the nominal power measured. The 10 modules was divided into 5 reference panels which were all lower power modules and 5 control/ check panels which were all higher power modules to cover or verifying the whole power range of all modules. This short report first shows the power statistic and then it compares the results of the EL tests. The next step is the closer comparison of some of the most marked panels. The end gives a short summery and conclusion.

Out of all 1370 measured modules were found in total 3 modules of the 325 W class and 1 out of the 330 W class from which the internal electric from cell to cell were interrupted. The diodes of all these modules were ok but the connection check fails. The flash test gave only 2/3 of the nameplate power from 3 modules with the support of the diodes and in one case no power at all. The results of the electrically defect modules will not take into account for the following statistics. 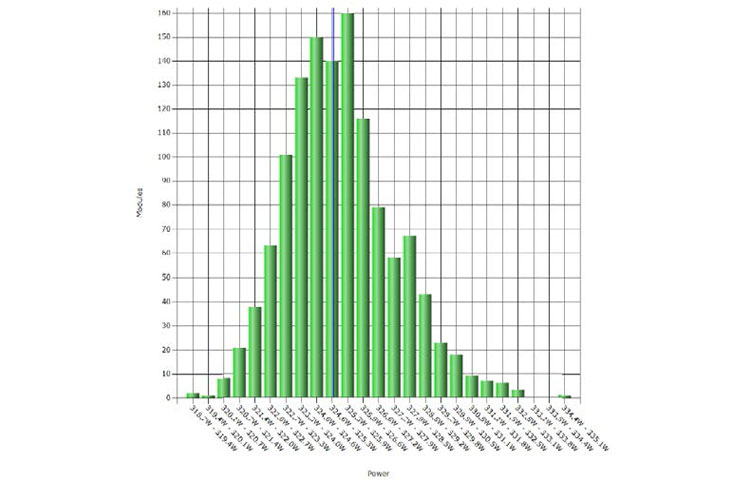 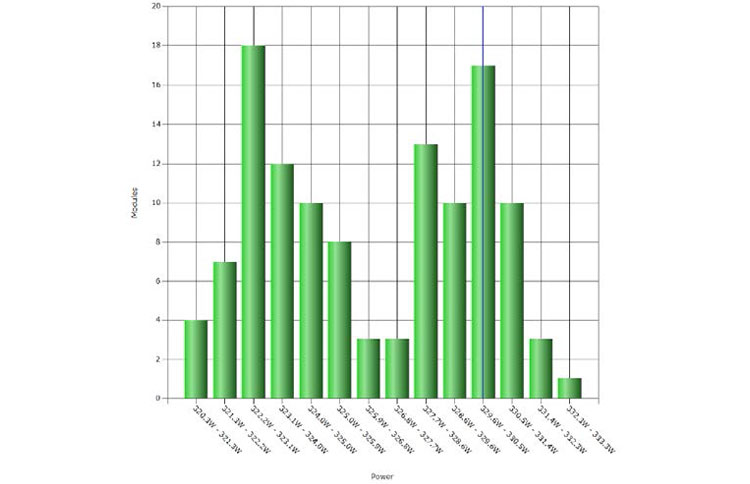 COMPARISON OF MEASUREMENTS FROM TÜV RHEINLAND AND MBJ

Table 1 shows the results of the power from the 5 reference modules and 5 control/check modules of the 325 W class. The 5 lower power reference modules were tested several times at standard test conditions (STC). The 5 higher power check modules were tested like all other modules only once at ambient temperatures to verify compare the STC results to the ambient temperature results.

The power results of TÜV Rheinland are given with a measurement uncertainty of ± 2 %.

Table 1: Results and comparison of measurements from TÜV Rheinland and MBJ

Figure 4 gives the comparison of the judgement from the same lab tested modules like tested after installation. The distribution of the “A” and “B” modules is quite similar like in Figure 3. In this case, 47 modules (≈ 6 %) of class A were changing to class B.

COMPARISON OF THE EL IMAGES 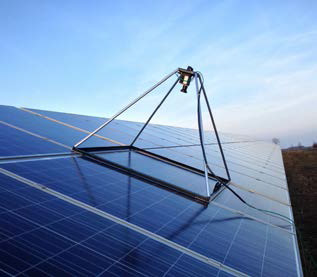 Picture of the Mobile EL head

For the image comparison of lab tested and in situ tested modules, 10 of the panels with the most marked cells where chosen. The new cracked cells are marked with yellow stars on the EL images of the in situ system (bottom).

There are no seriously damaged modules or cells found after installation. Only green or yellow rated cells were growing in addition. The new green and yellow cells do not showing an appearance of a crack caused by an single impact like a hit with a tool or similar. They are probably caused due to mechanical stress from normal handling and mounting the modules to the tables. 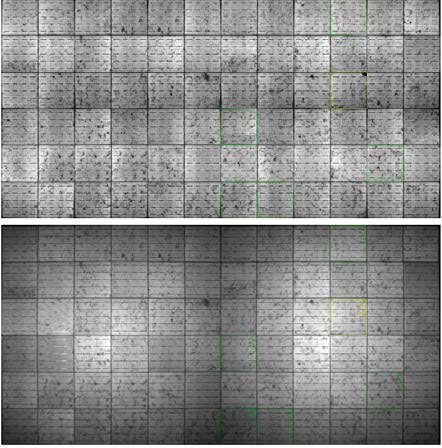 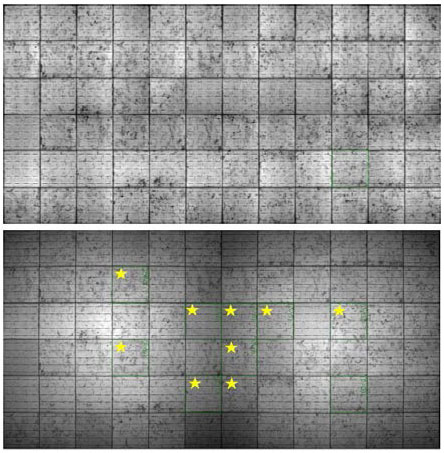 The EL testing of the modules after installation shows that the amount of found micro cracks is increasing with the installation to the racks. After the comparison of the EL images, the most likely root cause of new cracks is normal mechanical stress. However, even if the mounting personal knows that tests are starting after installation, backsheet scratches occurred. The installers should be sensitized again to the fragile backsheet before finishing the whole installation of modules.

Due to the sensible handling of the modules and the appearance of the cracks it seems that the modules are not as robust as the ideal module should be.

We would recommend in order to estimate the real impact of the “normal” installation of the panels, to do again an night time in-situ EL measurement, when the site has been fully installed, and compare the results to the previous ones. As we are not sure if the panels are robust enough to withstand normal to slightly increased mounting stress, this would be a good measure to do.

Also it is important to educate the mounting teams in order to handle modules as carefully that there are no back sheet scratches / damages happening anymore during the installation.