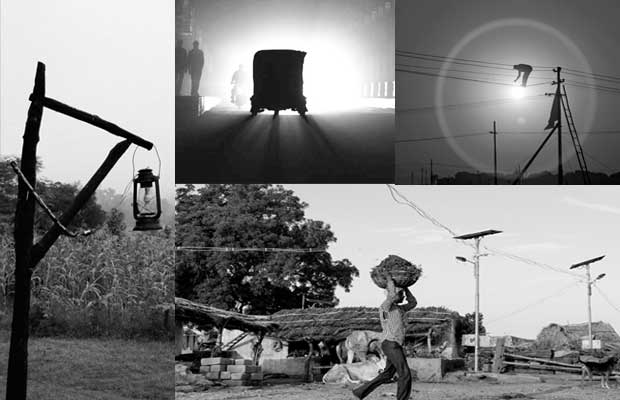 While perennial sinking prices of renewable energy systems, integrating technologies such as photovoltaic rooftop systems and solar farms into regional grids will require energy storage in the form of batteries and other technologies for load continuity. Currently, about 1.2 billion people in emerging economies lack access to electrical power. The World Bank report claims that the traditional centralized grids are not cost effective at providing even basic electrical service to underserved populations in a reasonable amount of time. By 2030, it is estimated that $45 billion will need to be invested to provide universal access to modern electric power. Microgrids, which can serve the power needs of small towns or cities as well as commercial and industrial complexes, can also connect or disconnect from primary power grids. 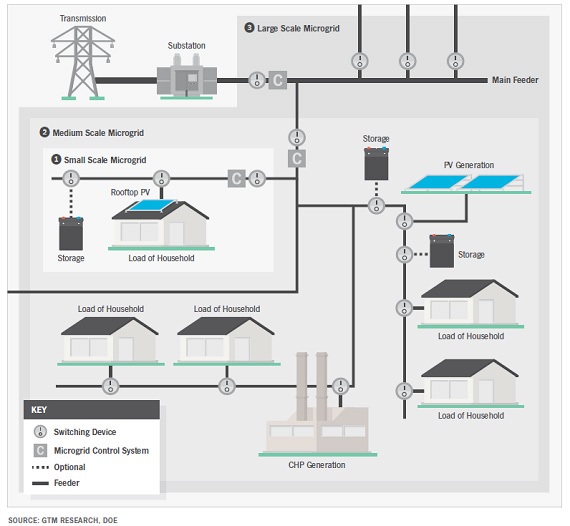 India Energy Storage Alliance (IESA) estimates that India has installed over 2,000 AC microgrids of over 5 kW by 2016 and over 10,000 DC microgrids with the majority sized at less than 1 kW. There are many challenges which have restrained growth of this sector including numerous financial, technical and social limitations. Different funding agencies have mentioned that most of the technical challenges are not yet known to them. Project operators at several occasions do not have clear answers themselves to recognise why microgrids are prematurely failing or operating at lower efficiencies. Creating a micro-grid requires building a micro distribution network with wires and metres. Large-scale utilities are plagued by theft and a lax payment mechanism and these problems transfer to solar micro-grid providers. To reduce theft, the workarounds that businesses adopt are often incredibly inefficient.

India plans to develop 10,000 renewable microgrids and mini-grids to help bring electricity to 237 million people living in energy scarce areas. The Ministry of New and Renewable Energy (MNRE) calls for 500 MW of installations by energy service companies (ESCOs). The ministry elaborated microgrids as renewable-based distributed generation under 10 kW which can operate on a stand-alone basis or connected to the central grid. Mini-grids are the same blueprint with over 10 kW. Funding for the installations would come from the federal government, states and commercial sources. To encourage ESCOs into the market, the ministry plans to set up a special category of private developer/operator known as Rural Energy Service Providers. The RESPs would receive special incentives and privileges, including upfront capital from the ministry and streamlined approvals. Project developers would become RESPs under a phased process. Before they receive the designation, they can install 10 projects (up to 200 kW) with ministry incentives. The government will then evaluate the performance of the microgrids and mini-grids for two years. If they are deemed successful, the developer earns the RESP title and can install more microgrids and mini-grids. The ministry envisions a large pool of RESPs forming to build and operate the microgrids and mini-grids. Those that work in areas where there is no or little grid access would receive funding preference. The ministry also explored ways to boost financial lending for the projects, and is encouraging financing through institutions like the Indian Renewable Energy Development Agency and the National Bank for Agriculture and Rural Development. Developers may build either AC or DC projects.

A new report has tracked data on known grid-tied and remote microgrid projects in the proposal, planning, and deployed stages across six geographies, with details on capacity, project numbers, and rankings.

North America is strengthening its claim as the leading region in global operational microgrid capacity with a 54 percent market share. North America and Asia Pacific account for 95 percent of the new project capacity, and the United States leads all countries in terms of both capacity and total number of projects. 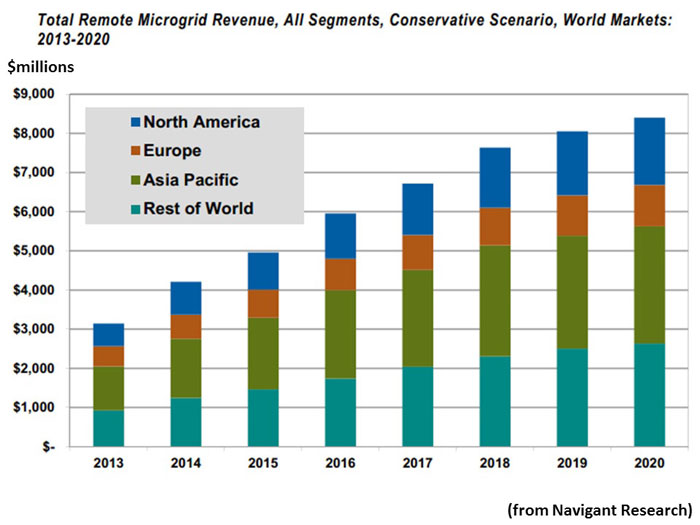 “The combination of solar photovoltaic (PV) and energy storage in microgrids isn’t just a fad—these two renewable technologies have been a driving force in the microgrid industry for years and their role continues to expand,” says Adam Wilson, research associate with Navigant Research. “With solar PV reaching grid parity with other traditional generation technologies, we see it move beyond remote systems, and the combination of energy storage and solar PV is becoming a more frequent combination across all segments and regions.” 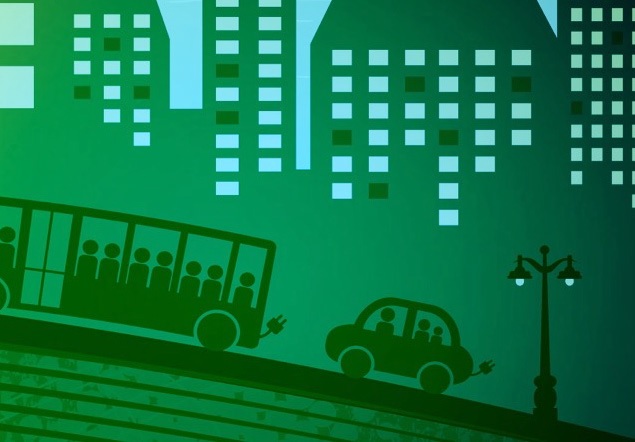 The Veristic Economics of Microgrids

The relationship of MicroGrid with the distribution system is an integral part of MicroGrid economics. The operational constraints of MicroGrid economics might not be alike to those of centralized power system economics. A real time price signal for successful interface between customers and distribution utilities can be provided in a MicroGrid which helps to achieve optimal use of resources by both MicroGrid and distribution/utility-side grid. There are various benchmarks available on the various operational aspects of different DG resources. The focus is now on the challenges to be faced in dealing with the adoptability of these DG/DERs in a MicroGrid. The biggest hurdle of adoptability concern is the economic viability in selecting a particular model/technology and implementing it with the intent of spurring its continued usage for a sustainable future growth. Hence, technical challenges and requirements need to be addressed fully for their continuous usage. They include the co-ordination issues of DG/DERs etc., and successful parallel operation of MicroGrids with distribution networks. Mainly, technical challenges can be dealt based on the study and analysis of the existing MicroGrids all around the world, and by using the amassed knowledge on power system operations of large-scale grids. It is known that technical challenges of MicroGrid operation can be linked to the economic issues. Hence, it is required to apply the combination of basic economics of optimal investment and available technologies in the operation of MicroGrids.

Is Microgrid as a service the Model for India?

According to the market research firm, the micro-grid as a Service Market is registering healthy growth due to various benefits offered by micro-grids such highly reliability, economical & efficient energy power, enhancement of renewable energy sources and smart grid integration among others. The autonomous working nature of microgrid provides great benefits to communities that have no access to electricity. The Solution also provides dynamic monitoring, scalability, and control to improve energy output. Micro-grid as a solution offers electricity at affordable rate and helps in reducing the economic losses from electricity outages in emergency situation. Some of major key players in Micro-grid as a Service Market such as ABB Ltd. (Switzerland), General Electric (U.S.), Siemens AG (Germany), Eaton Corp. PLC (Ireland), Schneider Electric SE (France) among others are investing in renewable energy solution such as micro-grid thus supporting the market of micro-grid as a Service.

How Important is IESA and the European Space Agency Collaboration?

The new initiative will support feasibility studies which identify and explore business opportunities for deploying services based on Satellite Communications, Earth Observation data, and/or other space assets to support the decentralized management of microgrids in India and other developing countries. The study is expected to culminate into a funded microgrid pilot project demonstrating the potential of above services. Requirements from Indian microgrids stakeholders will be collected by IESA and provided by ESA to the consortia whose proposals are accepted. India Energy Storage Alliance (IESA) has recently launched the “Microgrid Initiative for Campus & Rural Opportunities (MICRO)” whose main goal is to reduce electricity cost for microgrid consumers by 30-50% within next three years through technological & policy innovation. MICRO aims to develop microgrids as an enabler for economic transformation of regions currently suffering due to poor access to electricity. The IESA team believes that microgrids in India, has vast potential to transform the economic landscape in rural India as well as provide improved power quality for consumers in urban townships to critical infrastructures like hospitals and university campuses. To achieve this dream, the sector would need to be organized. The MICRO portal that brings together microgrid developers, technology providers, financing partners and local community was launched at a workshop at IIT Bombay on 19th August 2016. IESA is also working with partners such as Global Energy Storage Alliance and Alliance for Rural Electrification to extend this initiative to Asia and Africa, offering a tremendous commercial opportunity to developers and service providers.

Around the Globe for Microgrids – A Glimpse

ERock inks $240-$335M Genset Deal to expand Reliability Microgrid Enchanted Rock (ERock) has signed a deal for $240-$335 million of natural gas generators for its reliability microgrids. The deal comes as the microgrid developer continues to find traction for its reliability microgrid concept in Texas and moves to expand elsewhere in North America. Power Solutions International (PSI) and its subsidiary Professional Power Products (3Pi) will provide the gensets under a mutually exclusive deal. ERock installs natural gas gensets in microgrids at customer sites, which it aggregates into virtual power plants. The aggregations provide ancillary services to the central grid. Revenue from the grid services offsets microgrid costs, so ERock is able to supply customers – most recently stores — with reliability at a discounted price. The microgrids provide back-up power for the customers. ERock’s growth projections for Texas support the genset contract. But the company is working on deals beyond the state, including in Canada and New York.

With reliance on imported fuel oil for its energy needs, Aruba’s utility rates are approximately $0.28 per kilowatt-hour (kWh), below the Caribbean regional average of $0.33/kWh, according to NREL. Now it plans to engage in the next solar project for the island may be an airport microgrid. Aruba’s plan includes building new solar and wind farms, waste-to-energy conversion, and enhanced energy efficiency. Aruba already sources about 40 percent of its energy from renewable sources. WEB Aruba is the power generation company on the island, and N.V. Elmar is the distribution company; both are government owned by Utilities Aruba. An energy demand reduction program is underway as the government continues to upgrade all public lighting with energy efficient LED technology. Because 50% of Aruba’s energy demand comes from cooling, the utility installed a pilot ice storage cooling system that makes ice at night when electricity costs are lower. The ice is then used the following day to cool buildings instead of traditional air conditioning, NREL reports. ETAP, which released the latest 16.0 version of its software in November, provides a widely-used product for modeling, design, analysis, optimization, monitoring, control, and automation software for electrical power systems.

Microgrids still has to ply a highway to go in overcoming certain snags. There is a strong regulatory framework for encouraging the independent renewable energy generation which constitutes the building blocks for MicroGrids. The current on-going rural electrification programs are mainly with the renewable generation. But in large, the modification of the country towards a new way to tweak distribution systems looks promising. MicroGrids can provide excellent local ancillary services in voltage support and others for end-users. These distinct aspects can be utilized properly for encouraging the MicroGrids. And Modiled government and associated regulatory bodies has well understood eminence of the changing quantum’s on how power is generated and efficiently distributed.