The highest efficiency solar cell to date with metal contacts on both sides (not IBC) is the TOPCon cell structure developed by Fraunhofer ISE. They currently hold the world record efficiency of 25.8% with an impressive Voc of 724mV

[1]. The key differentiator of this cell is the addition of a thin tunnel oxide with Poly-Si passivation layer on the backside of the n-type cell instead of a diffused junction and hence the name Tunnel Oxide Passivated Contact (TOPCon). The world record cell on p-type material is the POLO cell by ISFH at 26.1%

[3]. The key difference between the a-Si and Poly-Si is that the a-Si cannot withstand high temperature processing whereas the Poly-Si is able to. This enables Poly-Si to be integrated relatively easily without having to the change the back end metallization scheme.

One of the key factors in commercializing the TOPCon structure is metallization. Currently, a full area metal contact by PVD is used in lab devices, which is not suitable for high volume manufacturing. There is great interest in finding a solution with screen-print and fired metallization in order to commercialize this promising high efficiency technology.

At Heraeus, we are actively working on metallization pastes that enable contact to the polysilicon layer while minimizing the metal induced recombination. This is a challenging topic for several reasons. Firstly, the requirement to reduce metal induced recombination is demanding, due to the nature of metal semiconductor interaction. Second, there are significant differences in the poly layer that play a major role in contact properties of the paste. Some of the key factors that affect paste performance on poly-Si are

1.Thickness of poly Silicon – From an absorption standpoint, thin Poly layers are preferred, however, metal induced damage is higher for thin layers. For screen print and fired metallization, thicker layers are generally preferred. As long as the poly layer is on the rear side of the cell, somewhat thicker layers can be tolerated.

2.Dopant concentration in the Poly layer – Sufficient dopant concentration is required to establish good contact between metal and poly Si. Whether the poly layer is doped in-situ while deposition or ex-situ after deposition, sheet resistance can be a useful metric. Typical sheet resistances of the poly layers are higher than conventional diffused layers, but the thin poly layers mainly drive that.

3.Surface morphology – The surface on which the Poly Si is deposited can be textured or planar. Recent studies have shown excellent J0’s for both types of surfaces.

4.High Temperature tolerance – As discussed earlier, one of the advantages of Poly-Si is its ability to withstand higher temperatures. However, metal induced recombination on the poly layer is also a function of temperature and usually increases with temperature. 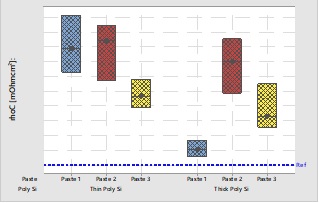 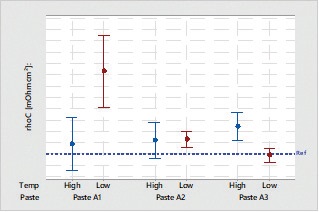 Usually, J0 of the poly layer is lower for planar surfaces compared to textured

[4]. However, recent developments in the poly process have shown comparable J0 for both textured and planar surfaces

[5]. Contact formation can be different on the two surface types. Figure 3 shows different pastes are suitable depending on the surface. Paste A has very good contact resistivity on a textured surface, but high on a planar surface. Paste B performs the other way around and has good contact resistivity on planar surface compared to textured surface. 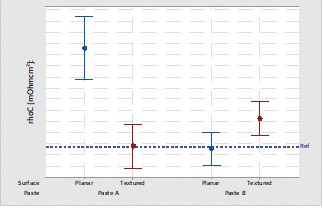 Figure 3: Comparison of contact resistivity of paste as a function of wafer surface

In addition to the contact properties, an important aspect of metallization pastes is their ability to preserve passivation. Screen printed and fired pastes work by etching the dielectric layers (used for passivation and anti-reflection) and establishing contact with the underlying silicon. When these layers are etched and contacts are formed, there is loss in Voc associated with metallization.

It is ideal to keep this recombination loss induced by metallization to a minimum, especially for high efficiency cell structures like PERC, n-type and TOPCon cells.

There are a few methods to assess the metal induced recombination of pastes. One technique that is more common these days is Photoluminescence (PL). Usually, PL is a great qualitative tool but to get quantitative values, it has to be combined with either modelling or use of a calibrated PL.

Another method is to print small cells with varying metal fractions and measuring the actual Voc of these small devices. Using the Voc as a function of metal fraction, J0,met can be calculated.

Another relatively easy technique used to evaluate this is by printing discrete metal dots of paste on a symmetric test structure and measuring the minority carrier lifetime after firing using Quasi Steady State Photoconductance (QSSPC) method. If the substrate is high resistivity and high lifetime such that the wafer can be taken to true high injection levels, then true J0 can be measured.

To demonstrate the effectiveness of this method, consider the data below in fig 4 where two pastes A and B were printed at 3%, 6% and 12% coverage fractions and fired. Paste A is DP02-1074, a non-contact paste used in double or dual print application, and B is SOL9641B which is a commercial fire through and contact paste. It is clear that as the metallization fraction is increased for a fire-through and contacting paste, implied Voc decreases as the metal fraction increases. On the other hand, with a noncontacting paste like 1074, Voc is relatively unchanged with metal fraction. 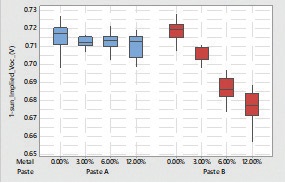 Figure 4: Implied Voc as a function of metallization fraction for two types of Heraeus pastes – Paste A is non-contact paste and Paste B is SOL9641B used for fire through contacts

Since test structures are routinely used for process development before the cell structures are fabricated, this is an effective method that can be used to accurately assess the recombination properties of our paste. By using this method, we have identified pastes that have minimum effect on metal recombination on poly Si.

Paste 1 and 2 damage the passivation to varying degrees, but the effect of Paste 1 is much more severe. It should be noted that contact resistance of Paste 3 is also low enough to confirm that this paste does make good contact to the Poly Si layer while preserving the passivation.

It is clear that Poly-Si properties have significant influence on the paste properties. Through collaboration with industry partners and research institutes, significant progress has been made at Heraeus on developing screen-printed paste for contacting Poly Si layers.

Pastes with respectable contact resistance and minimum metal-induced recombination have been developed for different types of Poly-Si layers. There is always room for improvement and we are continuously working to further reduce recombination from metallization with the goal of achieving true passivating metal contacts with low contact resistance. References:

Tags: Heraeus Pastes, PERC, Polysilicon, Solar Cells
"Want to be featured here or have news to share? Write to info[at]saurenergy.com